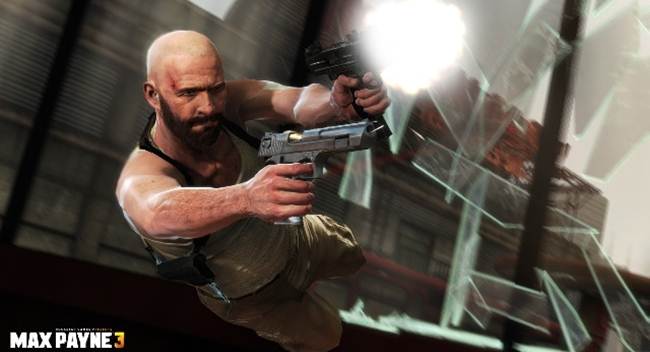 Gearburn’s Ronan Steyn got a chance to exchange some candid words with Max Payne: the star of the hotly anticipated Rockstar Studios’ game.

Gearburn: So Max, thanks for taking time to chat to us today. Now we all know the old Max Payne, but tell us a bit about the new you.
Max Payne: Like a bad soap’s storyline, mine keeps going. I had to leave New York City after Mona died, and Sao Paulo seemed as bad a place as any.

GB: Why Brazil, and why Sao Paulo specifically?
MP: When the darkness fell in New York City bad things happened in the night, but in Sao Paulo… bad things just happen.

Set eight years after Max Payne 2 and no longer a cop; Max is a fat, bald man with a bad attitude and a soft spot for painkillers.

GB: I didn’t know the NYC police department had ties in Sao Paulo?
MP: I ain’t a cop no more, I’ve been working private security — at least I’ve still got painkillers. [Max pops a pill in the office – not Gearburn policy]

GB: It can’t be all that bad?
MP: There’s no glory in private security. But the pay was good and Passos was the closest thing to a friend out there. That job was a lucky break, but luck always comes with a price tag.

GB: Passos?
MP: Raul Passos — my partner — crime fighting comrades… good-hearted macho bullshit like that. He showed me the ropes of the favelas, the ones that are so tied up in dirt, grime and corruption they’re all knotted up.

Raul Passos is the other playable character in Max Payne 3 (MP3). The game kicks off with Raul and Max having to save their boss’s (Rodrigo Branco) wife from the favela crews who have kidnapped her.

GB: What kind of man is Rodrigo Branco?
MP: Branco’s a wealthy man; he owns just about half the property in the city. He leaves a bad taste in my mouth, maybe that’s the cheap whiskey. The favela gangs thought they could get to Branco by taking Fabiana. All they had done was gotten my attention.

How Max got from working the gritty streets of NYC to the sun-kissed favelas in Sao Paulo and his descent into darkness and addiction is at the heart of MP3’s story.

GB: What was it like working with Rockstar’s Dan Houser?
MP: It was a shame to lose Sam [Lake], but Dan and Rockstar have an appetite, they hunger for a better me.

Bullet Time returns in its third iteration with improved animation and interaction with the environment. Expect the most stylish and realistic slow motion action in gaming up to now.

GB: You used to go headfirst into the action, but now you use cover, why?
MP: Human shields and a break now and then are welcome in this hellhole. [Max lights up a cigarette – Gearburn policies are officially out the window at this stage of the interview]

GB: You used to be quite the loner. What is it like being surrounded by so many people in your line of work?
MP: I don’t know what the favela crews wanted, but firing a gun is a binary choice. Either you pull the trigger or you don’t.

GB: Tell us about Bursts.
MP: It’s like the Sao Paulo jungle ran out of steam and the earth moved, like the fires of hell burning high beneath us.

Bursts work like Perks in the Call of Duty series — abilities that can be earned, levelled up and used to gain advantage in battle. Bullet Time is a Burst in multiplayer — when activated everyone in the line of sight of the player who engaged it will experience Bullet Time. Expect slow motion dog fights at a frenetic pace. The standout Burst is Paranoia which changes all of the opposing teams’ avatars into enemy skins and allows friendly fire. GB: It’s been a long time since we last saw you. You certainly look different, but do you feel any different?
MP: Everything is subjective. There are only personal apocalypses. Nothing is a cliché when it’s happening to you.

Using developer NaturalMotion’s Euphoria engine (GTA 4, Red Dead Redemption) MP3 has some of the most realistic physics and animations to date. Based on a full simulation of a 3D model, the actions and reactions are realised in real-time.

This means you will feel the burden of Max’s overweight body and depending on what he is holding (weapon-wise), jumping through, diving away from or landing on will change the animation… each and every time. This holds true for enemy animations and even when replaying same scenes.

GB: Max thanks for taking the time to talk to us tod…
MP: … [Max had already left the building]

Max Payne 3 promises to be a truly modern sequel. With a new studio, new writer and new technology behind it we can expect an engrossing new chapter in the Max Payne series, only this time accompanied by a dynamic and engaging multiplayer mode marking Rockstar’s first major foray into that domain.

*All credit to Sam Lake and Remedy Entertainment for the first two Max Payne games where some of Max’s Q&A dialogue comes from or is altered from.