By Steven Norris: grumpy curmudgeon
Read nextOlympus TG-1 is a 12-megapixel armour-coated beast of a camera 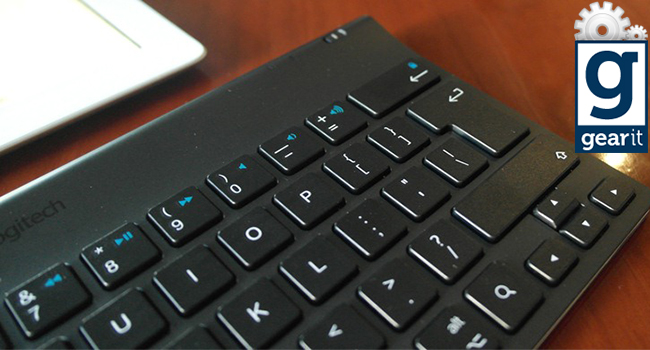 Was typing ever an issue on the iPad? For some, yeah it’s a pain in the ass. The lack of tactile feedback leads to spelling errors, frustrations and eye rollings as you scream at the gods saying, “Why Apple, why?”. So let’s say that you fall into one of these camps. In this instance you need the Logitech Tablet Keyboard, an incredibly fancy piece of tech which connects via Bluetooth to an iPad, or an iPhone if you’re mad enough.

The US$70 keyboard makes typing much easier. It feels quite strange to not have a mouse alongside you, so you end up reaching for the mouse before you realise that you actually have to reach out and touch the iPad screen. It’s like losing an arm and getting the “phantom limb” syndrome soldiers experience, only with well, a mouse.

The keyboard itself has a comfortable width which means that typing feels natural and not constrained by tightly packed keys. Best of all, the keyboard beautifully mimics a Mac laptop’s layout. The downside of the wider keyboard is that when packed in with iPad, it juts out of the top. The connection with the iPad was quick and painless and there is no lag when typing. The keys are plastic, feel great, almost smooth and sensual to the touch. For those who read my reviews, you know of the pseudo-sexual affinity I have with gadgets. I now know that this is called being a “technosexual” and I’m damn proud of that moniker. So as a technosexual, I give this the thumbs up in feel alone.

The case is designed to be used as an iPad stand. As a stand, the design is fairly weak and you are left thinking that Logitech would have done better job. It really lets the overall product down.

Two AAA batteries power the keyboard. You know you are going to run out of battery power when you least expect it and end up plying batteries out of remote controls. For its purpose though, the keyboard is a great device. I highly recommend it. The keyboard is available now, go on and snap it up.