If we had a dollar for every iPhone screen rumour we’ve come across, we’d have US$7.

The latest rumour, care of “independent sources” says that there are two iPhone 5’s in testing, both with huge, 640 x 1136 screen sizes on a 3.95-inch display. Mercy be.

Inside the locked tombs of Apple, securely-clad iPhones are being frantically tested, named iPhone 5.1 and iPhone 5.2. The source is unsure which iPhone model will make it’s way into the wild. It’s more than likely Apple creates multiple iDevices for rigorous testing purposes. The screen is said to be the same 1.94 inches in width, but will of course grow to 3.45-inches in height. This means that the screen creeps pretty close to a 16:9  ratio which is what widescreen was made for. The same source mentions iOS 6, and how Apple will use this wider display for an extra row to squeeze in a fifth app row. Things are gonna be tighter than a virgin snatch at this point. With the additional pixels at work, the bumped-up Retina Display should keep that fifth row of apps pin-sharp.

Finally, the rumours seem to confirm that the legendary Home button will remain and the much-maligned smaller docking connector will come into play. There’s going to be an endless stream of rumours, so bear with us as we sift through from the likely to the unlikely. 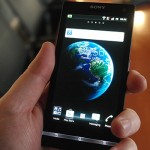