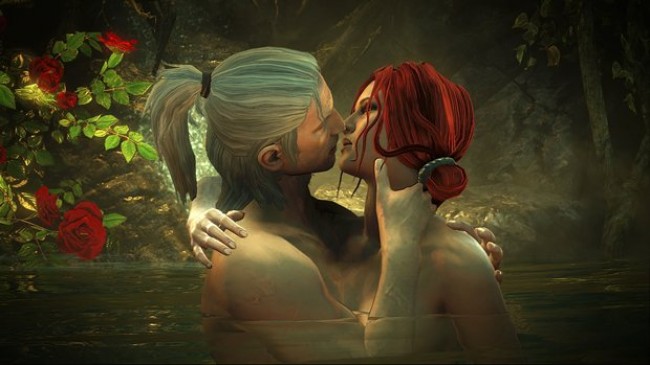 Hi. This article is intended for mature readers. There are constant references to sex and because it’s me, I won’t be holding back and, as such, the article is most definitely NSFW. Onto the digital titillation.

The idea for this article struck me after I battled the Kayran in The Witcher 2. Geralt and his on-and-off lover Trish celebrate this victory by having vigorous sex in an enchanted elven rose pool. It was pretty much the most graphic, mature and honest bit of digital intercourse I’d ever seen. Here’s the rub: I’ve been gaming for close to three decades now and this was the first time I saw sex in game, handled in a way that adults could appreciate.

So why’s it taken so long to reach this climax? I’ll tell you why. Most game developers still view their audience as children, not as adults who have grown up alongside their favourite consoles, progressing from Commodore 64 to Xbox 360 and beyond. But the gaming industry is aimed at kids. Look at how well the Nintendo’s Wii performed all those years ago. As sales for it began to tumble, signs pointed at gamers outgrowing a family-orientated system. That leaves us in a vacuum of sorts.

There have been roughly 20 Adult-Only (AO) titles and the list is a shocking display of crappy games which should have never made it past beta. Leisure Suit Larry and Lula 3D are two of the only games I’d call playable. The rest are dire adventure games with tits and ass thrown in for extra flavour. Hell, Australia cringes at the thought of these games landing in the hands of its gamers and with a whole country against this rating, there’s a very strong reason as for why no AO titles have made it past the censors hands since 2007. Gamers are left with two options. Accept a sexless future (gaming, not socially) or play titles which incorporate sex in a way that is both mature, fitting and responsible to its audience.

Maybe it began with Leisure Suit Larry. For many this was their first foray into an adult world. Larry wasn’t the perfect game and by today’s standards it’s pretty damn ugly, but the situations it placed players were miles apart from saving princesses in Super Mario. Buying condoms, banging prostitutes, urinating for the hell of it and fighting with pimps were some of the highlights of Larry, all rendered in glorious CGA. If the game is placed in today’s desensitised society, the sexual situations it places players in would barely register as a blip on the radar. But back then, it was pure masterclass. Even the giant “censored” strip during intercourse seemed risque.

I’m getting ahead of myself. Sex is pleasure, gaming is a passion. It makes sense to combine the two into a cohesive whole. Yet the underlying, adult theme of making love barely makes it past the MTV-style concepts. Sex in games cam be roughly defined by one of three categories:

Let’s begin with this. Gamers will say “OMG best sex evar WTF do you know n00b” but let’s ignore them and concentrate on the facts. David Cage, creator of Heavy Rain and Indigo Prophecy should be commended for trying something different, for creating one of the first interactive sex scenes in a popular video game. But you know what, it’s as titillating as watching paint dry. A collection of polygon bumping uglys, no thank you. It boils down to “Press X to fuck”.

Sex isn’t mechanical. It can’t be distilled into a series of button presses and motion gestures. By making sex interactive, it turns an intimate act into a weird dance of achievement points. It gets even worse with Dragon Age 2.

And by worse, I mean it starts well and ends predictably. “That was a nice diversion” says Isabelle. From what? The sex added nothing to the game, and cuts away before the action begins. This is how the big production companies handle it. Lead the players in, crank up the cheesy dialogue and cutaway before the tops come off. Dragon Age 2 is a mature game, but not an Adult-Only rated title so intercourse heads to the Recycle Bin. Plus the scene is as sexy as an episode of Days Of Our Lives. As embarrassing as these scenes are, they can’t hold a candle to a cup of hot coffee.

Which is what made GTA: San Andreas so popular. Not the incredible open-world gameplay. No, 30-seconds of hacked in sex known as Hot Coffee got Fox News enough “Video-games be murder” stories to last a lifetime. The scene itself is pretty horrid. It was originally planned as an added feature in GTA, but was obviously dropped. The PC version was hacked wide open and Hot Coffee slipped back in. It’s a clothing-only sex scene, makes no sense and was rightfully dropped. It’s also one of the worst and most over-hyped gaming sex scenes of all time.

The God of War series fits nicely into the kill-em-before-they-kill-you genre. You play an overpowered god who isn’t even allowed show off his manly moves in front of the camera. The mini-game sex scene starts off like a bad romance, and quickly pans off screen to rattling pots of over-sexed nymphs fondling each other as the player “presses X to fuck”.

Nothing tops Custers Revenge. I can count the number of rape simulators on my hand and it ends with one game. If this is how sex in gaming began, then it’s small wonder that it hasn’t progressed much farther than this sickening title. But there’s plenty of hope. Two or three titles have taken sex to heart, creating intense scenes which fit into the overall aesthetic of the game.

And so onto The Witcher. With one of the most mature stories in gaming history, The Witcher looks at sex as well as it handles its intertwining story of racial hate, sexism, evil and the toils of war. Sex isn’t a reward in The Witcher, it’s a progress. The story rolls on and Geralt does what he knows best. It’s shocking at first, but nothing worse than what you’ll see in the average episode of Game of Thrones. Any why not?

Sure, we’ve seen it all in games. Why can’t sex fit into the story without it being a reward? Beefy plots, outstanding gameplay and sex, minus the achievement points tied with them. Maybe we need to grow up as gamers. Sex in games reflects what we want as an audience. It’s time to choose, and I pick well-handled sex over over tits and ass. Let’s make it happen.