Things just got a lot more interesting in the world of tablet gaming. Today Amazon launched GameCircle, a service that allows players to gain achievements, view leaderboards and sync games across devices.

As The Next Web points out, the service seems to be a direct competitor to Apple’s Game Center, but it could potentially take on whatever tablet-modified version of Xbox Live comes out when the Microsoft Surface eventually lands on retail shelves.

Amazon also released a load of GameCircle APIs that it reckons will help game developers quickly and easily integrate their games with GameCircle.

“We have received extremely positive feedback from developers on our recently launched In-App Purchasing API with its easy 1-Click purchasing, and now we’re excited to add yet another reason to be a game developer for Kindle Fire,” said Paul Ryder, Vice President of Apps and Games at Amazon.

“The new GameCircle APIs mean that developers don’t have to worry about building leaderboards, achievements or sync in their games — they can focus on the elements of their games that are truly unique while building an immersive, more entertaining experience on Kindle Fire. This will quickly help developers grow their business by reaching more customers and keeping them engaged.”

Game studios like Imangi, Gamehouse and Spry Fox are already on board. Forget all the corporate crap for a moment though. The real new here is that even if you accidentally drop your Kindle Fire under a bus, you’ll be able to pick up whatever games you were playing as soon as you get a new one. Let’s remember that this is a US$200 device for a moment and realise that’s been a dream of gamers since Pacman was just a glimmer in his maker’s eye. 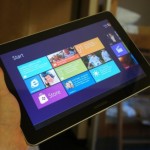