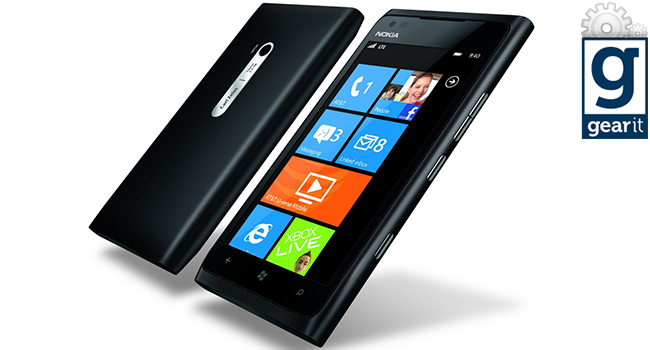 I had some time with the recently launched Nokia Lumia 900 last weekend. As an avid Windows Phone fan, I’ve been looking forward to using the latest and greatest Nokia. The Lumia 800 was a slight disappointment on launch as it had less features than my HTC HD7 with the stock version of Windows Phone.

To be honest I was very surprised to find that the Nokia Lumia 900 came with the latest software out of the box. Microsoft updated all Lumia devices last week to software version 8773 which included things like internet sharing et al. Setting up the Lumia was pretty straightforward and before I knew it it was running, and I was exploring.

Out of the box the device comes with the normal charger and USB cable, and a bunch of booklets. The software is what you’re used to with a few added extras such as Nokia Drive (soon to be standard across all new Windows Phone devices) and Nokia Music. As someone who uses Zune Music, the added benefit of Nokia Music is lost on me. However, Nokia drive was a nice addition as the stock navigation software on Windows Phone via Bing was kind of lacking (outside the US).

The device feels superb in your hands and I’ve always been a fan of the 4.3-inch display on a phone. For people with small hands it might be a slight problem. The display was the most eye-catching feature. The clear black display was a decent improvement over the usual LCD displays one is used to on Windows Phones. Colours were especially vibrant and blacks were, well, black. The resolution is still the stock 800×480 as with all Windows Phones.

We are not worthy

If you kept up with the latest Windows Phone news you would know that the Nokia Lumia will not be getting Windows Phone 8, mostly because the new operating system requires a secure boot enabled SOC motherboard and is optimised for dual core phones. On the flip-side, all existing Windows Phone users will get most of the same features via a marginal update called Windows Phone 7.8.

The battery life on the Lumia 900 was as expected, lasting anywhere between 10 – 12 hours with all updates on and normal usage. Windows Phone also allows you to enable battery saver mode which will turn off non-essential services and increase battery life by up to 100%.

Camera quality was slightly disappointing on the Nokia. The phone carries the standard Carl Zeiss optics as with all Nokia phones but the quality left me wanting. Photos came out oddly coloured. I’ve come to expect that from HTC phones but not from Nokia. Video quality is not spectacular at 720p which is something you’d expect from a smartphone these days. My HTC HD7, a 3 year old phone comes with 720p video recording.

The front facing camera was a nice addition and although I don’t really use something like that, the test ran very smoothly. Quality is on par with what you can expect from any video calling camera. The Skype app is available from the marketplace for free if the Tango app is not for you. Both worked fairly well.

The Lumia 900 set the bar pretty high in terms of design and the software completes the experience. As of today the Lumia 900 remains the top highest rated smartphone in the US by customers on Amazon.com and I can see why. This phone is amazing. Windows Phone remains the most intuitive and cutting edge smartphone OS ever and pretty soon Windows Phone 8 will take it even further.

With 6 out of 10 top rated smartphones in the US running Windows Phone this platform is off to a very good start. The Lumia 900 just builds on that. If you’re looking for a really fast, easy to understand and pretty awesome looking phone the Lumia is a definite choice.

If you’re like me, well then I would suggest waiting till October for those quad core Windows Phone 8 devices. For me upgrading from the HD7 to the Lumia 900 won’t offer enough incentive as both devices operate the same. The processor might be slightly faster and the added front facing camera is a nice addition but for two devices nearly three years apart, it’s kind of disappointing.

It just goes to show how Windows Phone can still perform extremely well on hardware that is so old. If you compared a three year old Windows Phone to say Android on similar hardware then you’d see a clearer picture on how well-optimised Windows Phone is. I will hold onto my HD7 for a little while longer.