We’ve been reporting on a taller (but not wider) next-gen iPhone for months now. Reports now say that Apple’s upcoming iOS 6 will actually scale to 640×1136 to meet the requirements of the taller next-gen iPhone.

This site, which is fairly well-known for breaking Apple stories, ran an iOS 6 emulator, tested the new scaling properties of iOS 6 and came up with some awesome proof-of-concept screenshots. So according to the sites tests, the ramped up 1136 vertical display is capable of adding in another row to the iOS display. Back over on the iOS 5.1 side of life, the usual four rows of icons are present.

It’s an easy deduction to make from here. The next-gen iPhone will come pre-loaded with iOS 6, which scales to almost 4-inches. Therefore, the new iPhone has to have a four-inch display. We realise that we can’t make blind assumptions based on a screenshot taken from an emulated session, but for gods sake’s if this isn’t proof of a larger iPhone then nothing is.

September hides around the corner, waiting to pounce with the next-gen iPhone firmly in hand. All bets can be safely funneled into the fact that Apple’s going to try its best to dazzle us with a larger phone. 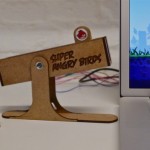