Is this it? TechCrunch reports that the iPhone is being announced 12 September, and launching 21 September. Sound like more crap spewed from the gluttonous belly of the internet? It’s not, so read on.

The confirmation comes from US-based mobile telecoms, Verizon which has outright confirmed that it’s going to have an “all-staff vacation blackout from the dates of Friday, September 21 to September 30”. When the bigwigs blackout staff time, it’s always an iPhone behind the scenes, pulling the strings and tickling the seedy underbelly of US productivity. That or Taco Bell began offering enchiladas in exchange for free iPhones.

Apple’s iPhone 1 launched 9 January 2007. The iPhone 3G, 9 June 2008. The 3Gs, 8 June 2009. The current look of Apple’s iPhone’s was defined in the iPhone 4, which launched June 7 2010. Finally, god’s own phone, the iPhone 4S revealed itself to us 4 October 2011. Now, the next-gen iPhone is scheduled for 12 September 2012. Is Apple breaking its mid-year launch pattern to combat the onslaught of the Samsung Galaxy S III? Hell to the no compadres. It’s Apple, and it’s going to do whatever the hell it wants.

Let’s travel back in time by at least one year with the launch of the iPhone 4S. Apple said “hey, you want this” on 4 October and a scant ten days later on 14 October, it hit the stores. And lookie here, the next-gen iPhone launches 12 September and hits the stores 9 days later. Seems like a pattern to us.

What do we know about the iPhone 5, next-gen iPhone, or whatever the hell it’s called? Thankfully, we don’t have to recount history, as it’s all here in our iPhone roundup article. 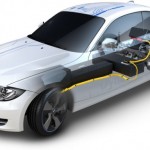