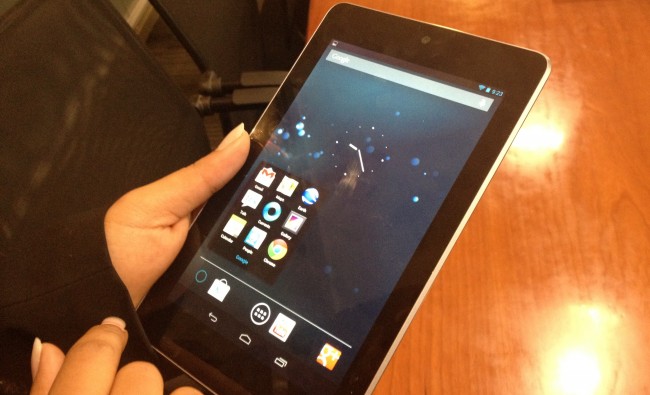 Each fingerprint is a mark of love

Google’s Nexus 7 worries me. As an iPad and BlackBerry PlayBook owner, I’ve been snobbish towards genuine Android tablets. Now, and as the Nexus 7 gently lands on my desk, I’ve seen the light. If you’re going to own a tablet, it should be this one. Thin, light and fast, this is everything the upcoming iPad Mini should be. But it’s the unique “Googleness” of the tablet that warms me to it.

Here’s the thing: The 800×1280, 216 PPI, multi-touch Corning Gorilla Glass display is exceptional. It’s all about the screen in fact. For once, here’s a tablet that’s unconcerned with physicality. It just “is” and the zen-like design bleeds through into every facet of the Nexus 7. The screen’s clearer than the majority of 7-inchers I’ve had my hands on. This includes the Kindle Fire, PlayBook and the Samsung Galaxy Tab 7.0. It bleeds class, it stinks of it. I won’t compare this to an upscaled iPhone 4S screen (that’s impossible at 320 PPI) but in terms of sharpness and the buttery-smooth interface, it comes pretty close to nailing how a tablet screen should look.

I ran tests, benchmarks we like to call ’em. Pixels filled the screen, a demo of some unimpressive game played out. It impressed me. The screen is powered by a ULP GeForce, this is a Tegra 3 chipset and mighty powerful it is. Angry Birds ran and looked like a waking dream, but so did Grand Theft Auto 3 and Shadowgun. A good, default selection of apps

The design of the screen, the luxurious spread of pixels is most at home with the everyday app use. Email, browsing the interwebs, reading 50 Shades of Grey, it’s a tidy affair. Think of a freshly washed lettuce leaf being torn in half. Crisp. And a little wet. It could be down to Asus TruVivid, which as wiki puts it is “a design that fuses the protective and sensor glass.” It makes the screen seem impossibly thin. It also creates an insanely responsive touchscreen, but more on that later. It’s an amazing, class-leading display and something all 7-inchers should aspire to.

The unboxing video of this beautiful little thang

This is a 340g gem of a tablet and is exceptionally positioned for one-handed browsing, you freaking perverts. I can comfortably use the Nexus 7 without wrist or eye strain. I can’t stress the importance of this enough. I mean, this is the entire point of tablets. It’s supposed to be comfortable. It’s supposed to fit into your goddamn lifestyle without limiting your ability to enjoy the product to its fullest. Top marks to Asus then. This is a damn fine piece of tech, constructed and sheared down to the bare minimum. There are no front facing buttons, only a 1.2MP camera for video calls and Power plus Volume control on the right hand side. Underneath is the speaker jack and the MicroUSB port. On the dimpled back there’s a single speaker and the word “Nexus” carved in plastic. Very minimal and very cool. Best design for a 7-inch ever? Yes.

What’s inside the plastic and metal guts of this puppy? There’s 8 or 16GB of internal memory, WiFi (no 3G sadly), Android 4.1 Jelly Bean and that delectable Quad-core 1.3 GHz Cortex-A9 (the first tablet to have one, says Google). It’s the current speed-king of 7-inchers, plus it’s been overclocked to 2Ghz. Take that, every other tablet in the world.

This is where the magic happens. The Nexus 7 is Google at its purest and the reason that the tablet is so fan-fucking-tastic. My life revolves around Google, as does 99% of the internet-loving population. Gmail, Google search, Talk, Maps, it goes on and on. This is the realisation of Google’s dream. A product that embodies the spirit of simplicity, without a convoluted OS to drag it down. Right away, Google Apps are installed by default and are ever-present on the home screen. Next to Chrome, Play store, apps, YouTube, the music player and Google plus, the remainder of the Google Apps reside in a single folder. And, if you so wish, the folders and shortcuts on the front can be customised to the nth degree. This is the first device to ship with Jelly Bean by default, so it should at least get props for that.

From the home screen, Google takes first place. The usual Android lock screen now has slide-to-unlock plus slide-to-search for lack of a better term. Swipe up on the home screen and the Google Now homepage pops up. Think of Google Now as a helpful Siri. It learns what the user likes and lists “cards” — snippets of information such as local weather and stock — on the homepage. The more the user repeats a certain action, the higher the chance is that a personlised Google Now card will appear on the homepage.

Who wants to live forever?

Battery life is par for the course. This is something that most tablets, outside of the ultra-cheap Chinese knockoffs, have mastered and the Nexus 7 boasts ten hours-plus battery life. I found that with light usage, I could squeeze two days of life out of the tablet. With heavy use, I got a day of pleasure. Compare this to my iPhone 4S which chows my battery life in six hours or less, and you’ve got a got yourself one hell of a reliable device.

And then there’s the Google Play store, the rainbow-coloured uncle of Apple’s App store. Google Play isn’t tied into the Nexus 7 the way Apple superglues App Store onto iDevices, it’s just the feeling you get when you play around with a true, open device. It’s as if Google is saying “here’s some apps, enjoy.” Apple says “here’s your iPad, now get your ass to the App Store and make it usable”. The Nexus 7 does whatever you need it to do, right out of the box. For those scared to migrate, fear not. Your favourite apps from Apple’s basket are on Google Play, minus the big hitting gaming titles and even these have started to migrate to GP. It’s a great app store, and a perfect fit for the Nexus 7. At this point, you’re thinking, here’s another fanboy gushing his heart out over another flavour of the month tablet. I tried my hardest to find a negative aspect of the Nexus 7. Endless nights spent staring at a glimmering blanket of stars, tablet in hand, I was never without a constantly connected companion. The tablet lags, but this rarely happened and only reared its ugly head when I purposefully pushed the Nexus 7 to its limits.

Any tablet that runs 1080p video, a game, streams music and lets your browse content at the same time is without question going to stammer like a halfwit. The Nexus 7 didn’t. It kept going and going like some sick Energizer bunny. And sure, there’s no back camera or SD card slot, but, so what. The Nexus 7 is more portable for it and have you seen how stupid people look when they take pictures with an iPad? Don’t even go there.

And it’s US$200. For the price of mostly any tablet, you can now get the emperor of slates. Until the Microsoft Surface bubbles onto the scene, the Nexus 7 will remain the king of the hill, and long live its reign.

Thanks to http://www.wantitall.co.za/PC-Hardware/Asus-Google-Nexus-7-Tablet-8-GB-Quad-core-Tegra-3-Processor-Android-4-1__B008J6VYUC for supplying us with the Nexus 7 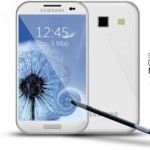