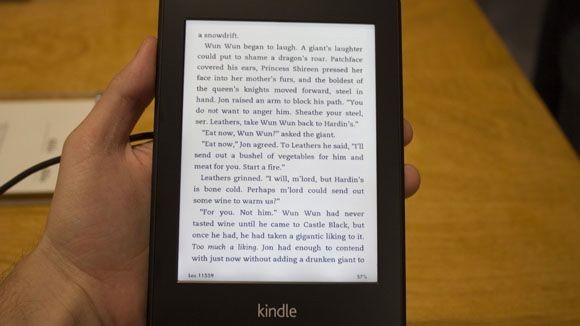 Amazon’s media-friendly Kindle Fire took off like nobody’s business when it was introduced in 2011, but the bookseller isn’t abandoning the traditional, books-only Kindle by any stretch of the imagination.

Amazon founder and CEO Jeff Bezos took the stage at an event in California to introduce the 6-inch Kindle Paperwhite, the next iteration of the company’s iconic brand of e-readers, and TechRadar was on hand to take it for a test drive.

The most important factor of any device that you’re going to be staring at for hours on end is the screen, and the Kindle Paperwhite sports a new display with the highest contrast and resolution and least glare of any Kindle screen yet.

TechRadar was able to test the Kindle Paperwhite in both well-lit and low-light environments, and the new tablet proved versatile enough to function in both situations.

The text on-screen remains readable even as the font size diminishes to levels impossible on previous Kindles.

The Kindle Paperwhite feels just as sturdy and ergonomic as any previous Amazon device, resting nicely in the hands at 9.1mm and 7.5 ounces.

We’ve come to expect a certain snappiness from Amazon’s Kindles, and the Kindle Paperwhite is no exception.

And, according to Amazon, the battery will sustain the device for eight straight weeks – even with the screen lit up.

The Kindle Paperwhite comes with some other nice features as well: Amazon’s Whispersync makes sure you never lose your place when switching between devices, and X-Ray tracks characters and other elements throughout every book.

Accessing it is as easy as tapping the top of the screen, which also summons font size and type controls and more.

The real draw of the Kindle continues to be Amazon’s gargantuan library of digital book content, including its 180,000 Kindle-exclusive titles. If the hardware is functional, then Amazon has done its job.

And the Kindle Paperwhite is as functional as it gets; every element of its design, from the front-lit, highly versatile screen to a new function that tracks your reading habits to determine how much time it’ll take you to finish the current chapter or book, is designed to better facilitate the reader’s experience.