More
Home
Subscribe
Skip
Continue in 10 seconds
Skip
By TechRadar
Read nextThe iPad Mini rumour round up: what we think we know [Infographic] 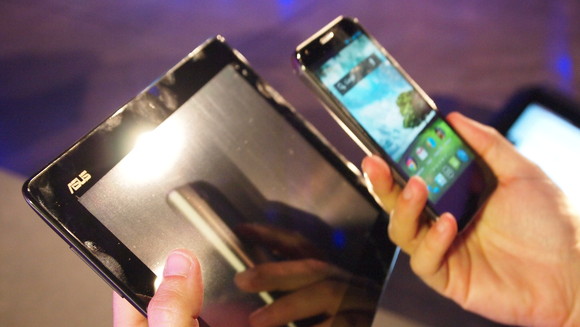 We’ve got our hands on the Asus Padfone 2 – Asus’ second attempt at a smartphone/tablet pairing.

In case you don’t know, the Padfone is an original Asus concept that brings together a tablet and a phone; the tablet itself is essentially a dummy device which the phone slots into.

There is a battery for extra life inside the tablet, but otherwise all the processing power, memory and more comes from inside the phone.

The company says it has listened carefully to the customer feedback on the original Padfone and has made some significant improvements for the device’s second generation – notably the introduction of a rather special slotting mechanism; the original Padfone featured a lift up cover under which you placed the phone in sideways.

With this new design it’s remarkably easy to slot the phone in straight down from the top, while rubber gromits ensure the phone can’t slide out unless you want it to. It’s a remarkably snug fit and metal plugs at the bottom of the dock provide the contact between the phone and the tablet part.

When you place the phone into the station you feel a small vibration to indicate it has been inserted properly. The content on the phone screen is also transferred to the tablet, but while this is great in theory, it only seems to work with main built-in apps at the moment.

The tablet dock is styled in a similar fashion to the phone, but when held side by side it lacks a little of the phone’s refinement – the glossy Corning glass looks smart, but smudges really easily.

The phone itself is considerably sleeker than its older brother, measuring in at 9mm at its thickest point and tapering to just 3mm at its tip. It’s unbelievably light. The phone and the tablet part – known as the Padfone station – weigh a combined 649g. That’s lighter than iPad 3, as Asus was keen to point out to us at the launch event we attended.

The 4.7-inch screen is certainly a step up from its predecessor, but somehow feels considerably smaller than the Samsung Galaxy S3‘s 4.8-inch offering than you might expect. The 10.1-inch tablet screen isn’t Full HD, but Asus indicated to us that this would definitely be something for the future; it already uses a Full HD screen in the Transformer Pad Infinity, but it would have added in extra cost.

There’s no two ways about it – this is an extremely powerful smartphone. The 1.5GHz quad-core Qualcomm Snapdragon simply roars along and it spells out where Asus sees the Padfone 2 going – into the hands of early adopters and power consumers; there’s nothing low end about this package.

Battery life has a big push for Asus, with the company boasting that when the phone is docked in the tablet it has a 3G standby time of six weeks. In terms of the phone itself, Asus claims 3G talk time of 16 hours, browsing of 13 hours, video of nine hours and 3G standby of two weeks.

Without the tablet, Asus claims 3G talk time of 16 hours, browsing of 13 hours, video of nine hours and The Padfone’s 13MP camera is impressive, offering a S3-bettering 6fps for 100 continuous shots and 720p video recording at 60fps, also better than the Samsung Galaxy S3 and HTC One X.

Sound is also definitely worth a mention – Asus’ SonicMaster tech is now in its third generation and, while it didn’t impress during the keynote (anybody can hold a microphone to a tablet), in a later briefing we had we were pretty impressed at how it filled the room (admittedly the music was of Asus’ own choice). The app to accompany the audio is also an example of some of the nice add-on work Asus is doing.

Extra work on a further SmartNote app (which recognises handwriting on screen) seeks to appeal to those who find the Samsung Galaxy Note 10.1 a draw (if you’ll forgive the pun). You also get a huge 50GB of cloud storage to boot.

With the Padfone 2 Asus has presented a hardware combination that delivers on much of the unfulfilled promise of the original Padfone. If you’re investing in a high end smartphone, it may be a tempting option.

It’s expensive when you think about it in terms of a single product, but when you think of it as both a smartphone and tablet it becomes a lot more reasonable – especially when you consider that you’ll only need one data contract (it will be interesting if it comes to 4G tariffs, too).

It’s unlikely Padfone 2 will be a truly dominant force and it probably won’t see Asus taking Apple and Samsung head on just yet, but the Padfone 2 does see Asus offering something unique and doing it with a good deal of style. 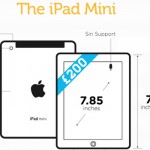 The iPad Mini rumour round up: what we think we know [Infographic]
Apple • 17 Oct 2012
Read More
More