With the launch of Windows 8, Microsoft has released some new peripherals that have been designed to complement the new operating system, and its new way of doing things. First up is the Microsoft Wedge Touch Mouse, a rather odd looking Bluetooth-only mouse.

In the past, Microsoft has launched a number of ergonomic peripherals that are comfortable to use for long periods of time. As you can guess from one look at this mouse, this isn’t one of them.

But that’s not the aim of this mouse. It’s not designed for sitting in front of a desktop PC for hours at a time, but for quickly using with a Windows 8-equipped tablet. There’s no dongle, but as long as your tablet is Bluetooth capable you can get Windows 8 to search, detect and connect to the mouse rather painlessly.

Software for adjusting what the mouse can do can be downloaded from Microsoft’s website, but there’s not many settings to change, so it’s pretty pointless.

The mouse is small, so easy to carry around with you, and you can fit a few fingers on there to move the mouse around. As with previous Microsoft mice, the Bluetrack technology keeps the mouse responsive over a variety of surfaces.

The Microsoft Wedge Touch Mouse is certainly not going to be to everyone’s taste, and we had some serious reservations when we first saw the design, but it’s actually not that bad at all if you want a light mouse to quickly work on your tablet when a touchscreen won’t do. 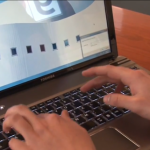