More
Home
Subscribe
Skip
Continue in 10 seconds
Skip
By John McCann
Read next$8 million for your bionic mind-controlled leg… Do I get bionic eyes with that? 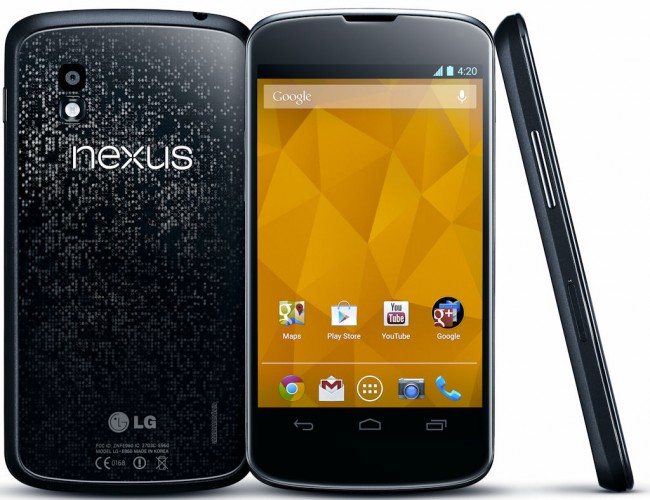 The Google Nexus 4 is the latest in the line of smartphones to carry the search giant’s brand, taking over the mantle from the Samsung Galaxy Nexus.

Manufactured by LG, the Nexus 4 offers up an attractive design coupled with some powerful specifications, helping it to stake a claim in the busy mobile market.

From the front there’s little difference between the Google Nexus 4 and the Galaxy Nexus, the featureless black gloss only has the ear piece grill and front facing camera interrupting its flow, and the handset is lined with a slender metallic border.

Weighing in at 139g the LG Nexus 4 is deceptively light, even though it’s actually heavier than the Samsung Galaxy S3 and iPhone 5, you wouldn’t know it.

It does feel chunkier than a lot of smartphones these days, partly due to the fact it’s 9.1mm in depth, but also because LG has decided not to taper the edges, making the Nexus 4 a blocky blower.

This doesn’t mean it feels huge in the hand, we were still able to wrap our hand round it without too much fuss, but having being spoilt with the likes of the HTC One X+ and HTC 8X recently, you do notice the difference.

Things get a bit more exciting round the back, with the Google Nexus 4 sporting a snazzy disco ball-esque mosaic rear which will not only keep you entertained for hours on end, it also gives a premium finish to the handset.

The Nexus logo proudly adorns the rear of the handset, with LG’s smaller icon featuring towards the base, and you’ll also notice the 8MP camera and single LED flash, which will please many including us, after the disappointing 5MP offering on the Galaxy Nexus.

On top there’s the 3.5mm headphone jack, while on the right the power/lock key sports the same placement as Samsung’s entire Android range, and it’s a location we’re fond as at it’s easy to hit when holding the Nexus 4 in one hand.

On the opposite side you’ll find the volume rocker switch, below which is the microSIM card tray which you will need to pop out with the special tool included in the box.

On the base the Google Nexus 4 gets a bit of an industrial design nod, with the microUSB port flanked by two rivets, similar to the ones found down the sides of the Motorola Razr . It’s a nice design flare, although it doesn’t exactly fit in with the 80s disco going on round the back.

As with all Google’s Nexus handsets, the LG Nexus 4 comes running a brand spanking new version of the firm’s mobile platform, this time known as Android 4.2 Jelly Bean.

While not a particularly major overhaul, Android 4.2 whizzes along without a care in the world thanks to the 1.5GHz quad-core processor and 2GB of RAM house inside the shiny case.

For those familiar with Android 4.0 Ice Cream Sandwich and above, you’ll easily be able to pick up and play with the Nexus 4, and the 4.7-inch, True HD IPS Plus display easily competes with the Galaxy S3, One X+ and iPhone 5 in terms of clarity and brightness.

The screen is responsive and the Nexus 4 will happily run multiple apps without a care in the world, while Android 4.2 offers up a whole host of widgets to stick on the five homescreens, although this number cannot be increased.

Pull down the notifications bar from the top of the display and it will all look pretty familiar, apart from one new icon in the top right hand corner.

Give it a tap and you’re met with a series of quick settings – yep that’s right, Google has finally got around to adding these into the core Android experience.

From here you can adjust the screen brightness and view the battery percentage, as well as toggle various settings such as Wi-Fi, Bluetooth and aeroplane mode – we do wish there was a NFC toggle as well though.

The camera does take a second or so to load up, but once you’re in there’s some cool tricks and a new design on offer, the highlight of which is the 360 degree panorama mode, allowing you to take a complete sweep of your surroundings.

We witnessed variable results during our brief play with it and obviously moving objects, such as our colleagues, didn’t help the matter by contributing significant blur to the output.

The lack of expandable memory, 4G connectivity and a sealed in 2,100mAh battery may put some people off, but at this price point it’s hard to knock and we expect positive results in our full Google Nexus 4 review, which will be online soon.

Article originally appeared on Techradar and is published with permission

Read More
$8 million for your bionic mind-controlled leg… Do I get bionic eyes with that?
Gadget News • 5 Nov 2012
Read More
More