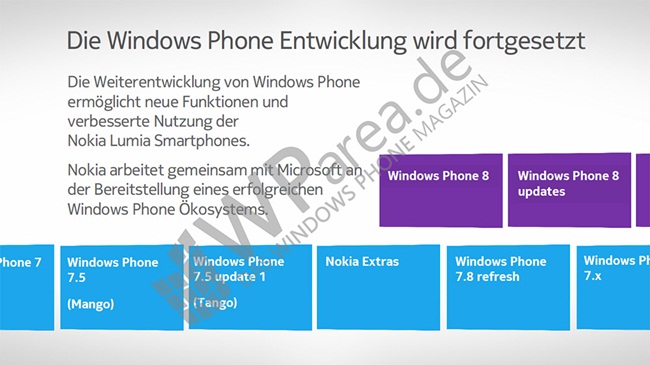 In a leaked image courtesy of German site WP Area, WP 7 users may be offered a slight reprieve before biting the bullet and making the jump to Windows Phone 8. The leak, made possible by an anonymous source details the current road map of Windows Phone 7 OS.

The most interesting feature details an update set to release after the current Windows Phone 7.8 OS ominously titled 7X. We guess that 7.9 was already taken. The German site also highlighted the origin of the document as Finnish communication giant, Nokia.

The reason for the continued road map is unknown, but we can infer that Nokia may be keeping its version of Windows Phone 7 OS for a rollout of entry-level devices to smaller markets in Africa and Asia. Apart from that we can see no logical reason to retain an inferior OS when a better version is currently available. The full specs on this rumored update are yet to be disclosed, but 7X is definitely an update in and of itself and not a simple extension of 7.8. We hope the update incorporates elements from WP 8 to entice current Windows Phone 7 users to make the shift to a superior Live Tile experience.