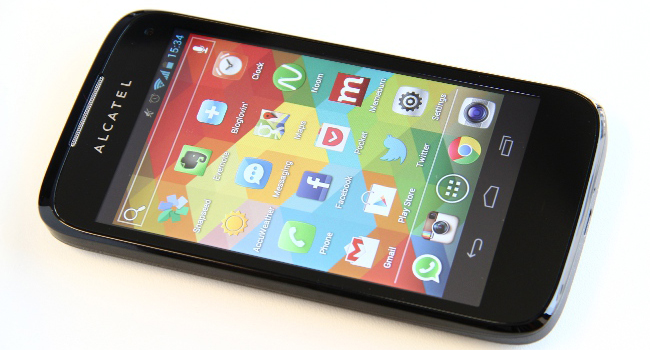 My first experience with an Alcatel was in the age of the Nokia 3310. My, how things have changed. Now that the company is competing in the Android smartphone space, its One Touch line is standing up against the cryptically named Xperias and HTCs in its price bracket. We liked the über budget One Touch 990, and the new lineup that hit this year’s CES looks pretty smart too.

Well, it is not dainty. It’s not small. At 143 grams, it’s a solid chunk of a phone with lines going everywhere. It’s not the sleekest design: the black (Alcatel calls it “ardesia” – it also comes in white and “lipstick” red) model had a grey back plate with diagonal stripes at the bottom, which may be a bit much for the minimalists out there.

The bottom of the battery cover is also slightly raised, so that if you pop it down on a flat surface, the phone is balanced and the camera and LED flash don’t get scratched. The device is also protected by a water-resistant nano-coating that makes it less likely to die an early death after a few splashes.

The phone is 123mm tall but quite sturdy at 11mm thick, and has the volume button located on the top right edge, the lock/unlock one and earphone jack at the top and the USB connector at the bottom. The phone’s face is pretty classic with a silver speaker grill nestled in the gap between the screen and the surrounding plastic. There is also a centre-mounted white notification light that subtly blinks when the phone is locked. The three standard Android keys are not physical buttons, but sit on the touch screen above. The dual core 1Ghz CPU is surprisingly speedy — there is some slight lag when switching between multiple applications, but nothing noticeable enough to really delay or frustrate you. The phone runs Android 4.0 (Ice Cream Sandwich) and has all the usual sensors (light, proximity and accelerometer) and connectivity options (Bluetooth, WiFi, radio) and is a pretty efficient on-the-go WiFi hotspot too.

Alcatel’s version of Android is surprisingly Nexus-y — the transitions, standard navigation icons and sliders in the menu bar are all stock, although it’s cut down some of the options and put in a few of its own icons. But the mix of pre-installed apps is odd. I’m used to the standards social media apps, manufacturer apps and maybe a few others (HTC’s partnership with Dropbox, for example) but Assassin’s Creed? Platinum Solitaire 3? Asphalt 6?

Fortunately, you can uninstall most of them (except the search bar at the top of the home screen), but the menus are alphabetical and can’t be arranged by categories like ‘most frequently used’ or ‘most recently installed’. So you’re stuck with the odd little icons unless you transfer your life entirely to the multiple home screens and avoid the main menus. The One Touch has a 4.3 inch 800 x 480 pixel display (that’s a pixel density of 217 ppi) which is… um, interesting. Although it’s a bit difficult to look at when you’ve seen the wonderful world of Retina Display, the quality overall is quite good. Colour reproduction is great, and the resolution is more than adequate to enjoy most games and apps. The problems lie in other areas.

Automatic brightness just doesn’t cut it — despite all the good battery-saving intentions, the screen is too dim on anything other than maximum brightness. If you have a few fingerprint smudges on the screen (and come on, you usually do) it is so difficult to see what’s going on in direct sunlight that it’s often not possible to figure out if the phone is even unlocked.

People with a grudge against phones without external memory options will be happy about what I’m about to say next: the One Touch has SD card support of up to 32GB and 1 GB internal memory, as well as 512MB of RAM. The phone comes with a 4GB microSD card to help you on your way.

It also has a very responsive touch screen with an autocorrect feature that is good, but not the best. For example, it doesn’t automatically capitalise a single letter “i”. If you’re a grammar freak, trying to type sentences in a hurry (“I am awesome”, for example) will slowly drive you mad. The One Touch meets the specs of some of the high-end phones when it comes to the camera. The rear one is 8 megapixels and shoots 720 px video at 30 frames per second, and the touch-to-focus knows what it’s doing. There’s also a front-facing VGA camera for video calls.

If you’re a fan of close up photography, this Alcatel will take photos of the pixels on your monitor and the individual fibres in your shirt with no issues. Unfortunately, it’s let down by quite a slow shutter speed, which means photos have a tendency to blur unless you have the steady hands of a surgeon and a static subject.

Phone calls are clear and easy to navigate thanks to the huge giant red ‘hang up’ icon which dominates about a fifth of the screen during a call. Alcatel promises 8.5 hours of talk time and 350 hours of standby time on 3G networks, but if you’re a chronic WiFi user, a Google Maps navigation fan and a hectic multi-tasker, the 1800 mAh battery can take a beating. The poor thing only lasted about 20 – 26 hours when constantly connected to WiFi and used for all the basics (web browsing, social media, Maps, phone calls, WhatsApp, email, etc) multiple times a day.

Despite my few minor gripes about the sun-hating screen and lazy autocorrect, I must admit that, for its price, the 997 Ultra is a good little Android. Once you’ve got your device sufficiently customised and found workarounds for the issues you may have, it’s a competitor for users in the space between the Galaxy Pockets and S IIIs of the world. Its camera, processor and minimal additions to stock Android make it a quality phone which will no doubt find favour with buyers interested in a phone that’s a little less mainstream and a little more cost-effective.