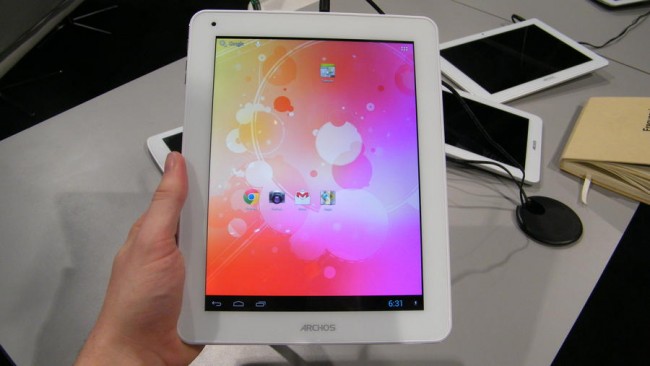 The iPad has been a roaring success so unsurprisingly every manufacturer out there has looked to match Apple’s tablet in terms of style, functionality and most importantly popularity.

The next young pretender to the iPad’s crown comes in the form of the Archos 97 Titanium and after all the legal shenanigans with Samsung we’re surprised this tablet bares so much of a resemblance to Apple’s slate.

As with the smaller 80 Titanium, Archos has emblazoned the front of the 97 Titanium with its logo and a front facing camera positioned in the top corner in an attempt to give the tablet an air of originality.

The tablet itself looks relatively premium with the version we got our hands on actually the 97b Titanium – a plastic-rear clad variant destined for the US market, while Europe will be treated to the 97 Titanium, sporting a smarter aluminium rear.

Picking up the 97 Titanium we noticed it had quite a weight about it which made one-handed use a strain on the wrist, so you’ll need to use both mitts or rest the tablet on your lap for extended periods of usage.

As the name suggests there’s a 9.7-inch display present with boasts a Retina-like 2048×1536 Super HD IPS resolution, providing a bright and crisp image.

This meant that Android Jelly Bean looked impressive on the 97 Titanium’s screen, and Archos has not meddled with Google’s platform giving you full access to the highly flexible operating system.

With a 1.6GHz dual-core processor and quad-core GPU the Archos 97 Titanium is modestly powered, although Jelly Bean wasn’t the slickest operation we’d experienced.

The tablet did take a second or so here and there to load what we had requested and while the 97 Titanium is still running a development build we were hoping for the performance to come close to that of the iPad.

We found that the screen often got confused when it came to rotating, with us going from portrait to landscape sometimes leading to the screen being upside down.

This is something we hope gets fixed before it goes on sale next month, as it would be highly frustrating for any user if it doesn’t.

Of course video playback on the 9.7-inch Super HD IPS display is impressive with vibrant colours and a high level of detail, and the dual speakers round the back of the 97 Titanium produce a decent audio volume although it’s not the crispest sound.

The 97 Titanium release date will be before March this year, while its price is an exceedingly competitive £199/$249 (around AU$300) which makes it far more affordable than the iPad 4 to which Archos believes it rivals.

This is the only price band for the Archos 97 Titanium as it’s only available in its 8GB, Wi-Fi only guise – a big disappointment for anyone who likes a large amount of storage in their tablet or the ability to access the web on the move.

An ace up the 97 Titanium’s sleeve though is the inclusion a microSD port allowing you to build on the pitiful storage inside – something a lot of 10-inch tablets don’t support these days.

Archos has also provided metal power/lock and volume keys on the 97 Titanium it give it more of a premium look and feel, setting it apart from the plastic buttons found on the smaller 70 Titanium and 80 Titanium.

The Archos 97 Titanium provides a dual camera offering with a 2MP lens on its rear and a VGA snapper on the front.

The camera app and shutter speed are not particularly quick, but at least the system is intuitive thanks to the stock Android software in play.

As you’d expect from a 2MP camera image quality isn’t great but the Archos 97 Titanium isn’t a device made for taking pictures, it just has cameras to tick another box on the spec sheet.

Archos want the 97 Titanium to be seen as an iPad on a shoe-string and while it does have a decent display the overall experience left us a bit empty.

Sure it’s got the various bells and whistles of most tablets these days but it lacked the polish of Apple’s creations and other Android tablets are faster, smoother and feel nicer in the hand.

The price point is certainly competitive and you get a decent chunk of tablet for your money, but if you’re looking for something which is going to rival the iPad then you’ve come to the wrong place.

Review from Techradar.com and is published with permissions.