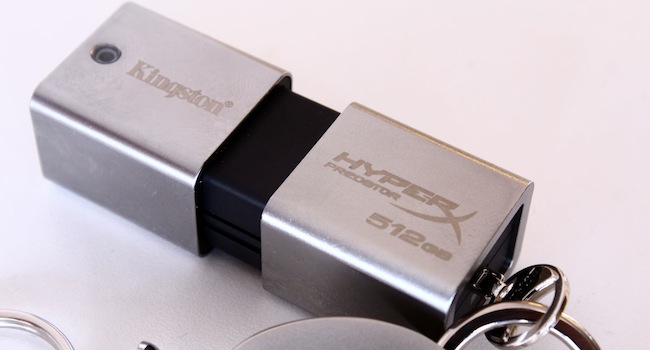 Its full name, the Kingston DataTraveler HyperX Predator 512GB USB 3.0 Flash Drive, is as meaty as the drive itself. I never dreamed of holding a half-terabyte flash drive in my hand, but truth is stranger than fiction. Here it is, the world’s second largest flash drive. A flash drive with an enormous amount of memory, excellent transfer speeds and the look and feel of a men’s cologne can.

This bastard’s straight up huge, in both size and physicality. It’s 72mm x 26.94mm x 21mm and with the included keyring, it seemed like it could turn into a serious replacement for my chrome-plated set of nunchaku. But at only 40g in weight, I highly doubt it. It’s the 512GB memory of course, eight 64GB NAND flash chips squeezed into a single, blocky memory beast. And it’s amazingly fast. USB 3.0, mostly recognizable by the blue hue on the connection port is tested to its limits here. In a simple data transfer test, I copied over a 4GB file and it took seven second to transfer. It also topped out at a transfer rate of close to 240MB/sec. Which is exactly what Kingston promised on the neat little silver tin it shipped the HyperX Predator in. For testing purposes, I used my Mac’s native Activity Monitor app.

The sheer size of this hulk made me careless. I started leaving my 2TB hard drive at home. Will I ever need to store more than 512GB of data during one day of work? No. How about a week’s worth of work? You’re having a laugh. Try a month, better yet, the HyperX Predator backed up close to six months worth of downloads, 412GB and did it in under two hours. Mind equates to blown. Does what it says on the tin

Its power then is one of sheer ferocity, mixed in with a heady dash of zinc-alloy metal and fist-clenching heft. I half expect Kingston to released a knuckle-duster attachment in the future. With the HyperX Predator strapped to my hand, I could very well knock a dent in a wall.

The HyperX Predator is thankfully, not going to cost the estimated US$1 750 which Kingston mentioned at this year’s CES. Amazon prices it at a far more palatable, but still cringe-worthy US$885. It’s still a small fortune to drop on a novelty item, but it’s practically a grand off the initial price.

For the price though, Kingston makes it count. My HyperX Predator shipped in an impressive metal tin, which once pried open revealed the drive, beautifully cut into rubber. Next to this was the keychain and USB extension cord, which is excellent and intelligent addition by Kingston, as the drive is often too big to squeeze if other USB devices are plugged into adjacent ports. There’s two camps I can recommend the HyperX Predator to. The consummate, and wealthy, IT professional who’s tired of lugging around a bulky hard drive. With 512GB storage, there’s really no more need to fuss about space. That’s practically enough to backup weeks worth of any small businesses data. Secondly, the champagne-sipping royalty who don’t give a damn for price or practicality. For the elite, these are novelty items that a year’s worth of HD-filmed yacht races can be crammed into. There’s not a single one among us who wouldn’t winch at the thought of dropping close to US$1 000 on a flash drive.

Yet, the 1TB version isn’t far off. Is it worth purchasing its baby brother, or is it more prudent to wait a month to spend double on what will be undoubtedly the world’s largest flash drive? For US$885, I’m giving the HyperX Predator a pass, which is unfortunate as my judgement is based on price alone. With price removed from the equation, this is one of the fastest, most reliable and largest flash drives in the world and when placed next to a laptop, adds a niche value that is impossible to understate. Basically, like an upside down Dalek ready for action. 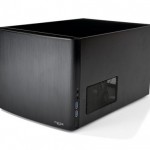