More
Home
Subscribe
Skip
Continue in 10 seconds
Skip
By Gareth Beavis
Read nextHP Envy X2 review: a laptop, a tablet, and no good as either 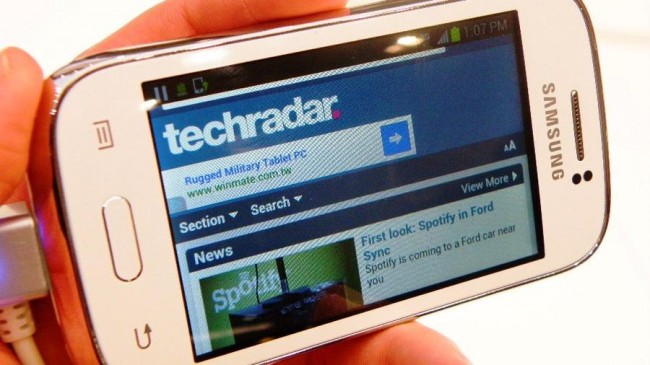 Samsung knows there’s a lot to be gained in the cheap phone game, so has released the basic Galaxy Young.

Similar in many ways to the new Samsung Galaxy Fame, and likely to be sold side by side in some outlets, the Young skimps on a number of specs in order to bring an ultra-low price to consumers.

As the name clearly suggests, this is a smartphone designed for the whippersnappers, those who don’t want to do anything more than download a few apps, show off to their friends and generally do smartphone things that don’t involve trawling through a million menus to achieve.

You could argue such a device would be great for the first time smartphone user too, but given the naming, you can see that this isn’t going to be a phone that your mum or dad would want to be seen carrying around.

The specs on the Samsung Galaxy Young are pretty much the lowest you can imagine on a modern smartphone, with a 3.27-inch screen with an HVGA resolution. It’s also rocking Android Jelly Bean with version 4.1.2 under the hood, but sadly that doesn’t include the likes of S Beam because there’s no NFC onboard.

Here’s a confusing conundrum: there’s a 1GHZ processor, but more RAM than in the Samsung Galaxy Fame – which is meant to be a more powerful handset to play with. It doesn’t mean that the Young is powerful enough to do what you always want to do, as sometimes opening and closing applications isn’t the smooth experience we were expecting; after all, it wasn’t that long ago that we were lauding the HTC Desire for having a 1GHz processor, and that was slick as you like.

But it’s not terrible though, and the Samsung Galaxy Young is certainly able to do a lot of things that you’re after – for instance, the messaging capability of the handset is excellent.

Firstly, there’s so much on offer to do, being able to talk over all manner of instant messaging, email, SMS and more inbuilt within the device. Also, the keyboard is excellent – again, it’s much better than the Fame in terms of accuracy of typing speed, which is odd given the screen is smaller.

Moving onto the design, and the second you pick up the phone you realise it’s a budget device – the 12.5mm (0.49-inch) thickness is apparent in the hand instantly. It’s a fat little phone, and with a 1300mAh battery, and we’re wondering if that’s enough to keep the battery chugging along in the background.

The screen being lower resolution is going to help though, since that means fewer pixels to drive and therefore taking less power over the course of the day. Sadly that low resolution doesn’t mean that the Young is going to be a great device to watch video or browse the internet on, because despite the higher pixels per inch compared to the Fame, it’s a very blocky screen to check out.

The camera is also as low as any manufacturer could get away with, with a 3MP camera bolted on the back and no LED flash, so no low-light level pics for you with this phone. Or any self-portrait shots, as there’s no front-facing camera either.

It was fast enough at taking snaps though when we were testing it out, and will certainly do if you’re looking for a phone that will help you share pics and videos of your friends to social networks – and the file sizes will be smaller too, which means you won’t have to worry as much about your (or your kids’) data consumption.

The Samsung Galaxy Young is a phone that you can imagine the younger teenager who wants a modern smartphone asking for at their birthday. It’s not got a price as yet, but it won’t cost that much money to pick up without a contract, and with the ability to set data limits on the phone, parents will be happy that they won’t be hit with whopping bills.

It’s an uninspiring phone for the spec-hungry fan, but it copies theSamsung Galaxy S3 styling and for that reason alone we can see a few skirt hems being tugged as children give their parents the big eyes as they look to get something that’s newer than their friends’ phones.

This article by  Gareth Beavis appeared on Techradar.com, a Burn Media publishing partner.