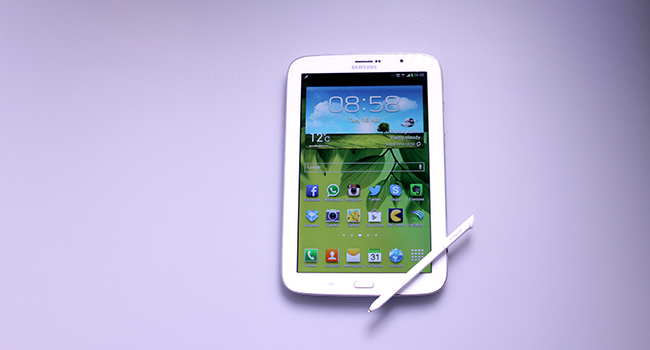 The Galaxy Note 8.0 is the very best Samsung tablet yet, which isn’t saying much, since the Galaxy tablets are (in my opinion) devices with loads of processing power but very little to offer in terms of desirability. Big screens, dual-core CPUs, just “moar” and it never seems to end. What Samsung needs is a tablet that gives people a reason to want to buy an 8-inch tablet over an iPad Mini or Nexus 7. Samsung though, has struck gold with the Note 8, the fastest, prettiest and most useful Samsung product I’ve ever used.

I keep specifying “Samsung” because the iPad Mini and Nexus 7 may also be smaller tablets, but they are both still in a class of their own. Think of it like this. Samsung’s Note 8 is speed and good looks, Apple’s iPad Mini is beauty and refinement, while Google’s Nexus 7 is pure freedom. Ultimately, I like the Note 8 and there’s nothing to really complain about, except for the US$400 price which leans towards a very considerate purchasing decision. But here’s why I think the Note 8 is worth US$400 of your hard-earned cash:

Too fast too furious

The hardware specifications reads like a wish list. A quad-core 1.6Ghz CPU, 2GB RAM, LTE, 4600mAh battery, an 8-inch 189ppi display, the list goes on. It’s a tablet that is as slick and fast as the best on the market. Flicking from screen to screen shows the power behind the Note 8, and the animation flows at a buttery 60fps. I’ve had the Samsung Note II, the 5.5-inch version of the Note 8, and the difference is highly “notable”. The Note 8 is very responsive, and it’s got everything to do with the CPU. It never stutters, it multitasks like a dream and runs some of the more intense 3D games (like this one) with ease. Games especially seem to be more responsive and brighter than on the iPad Mini, for once I must add. It’s usually iOS devices that get the most responsive games. 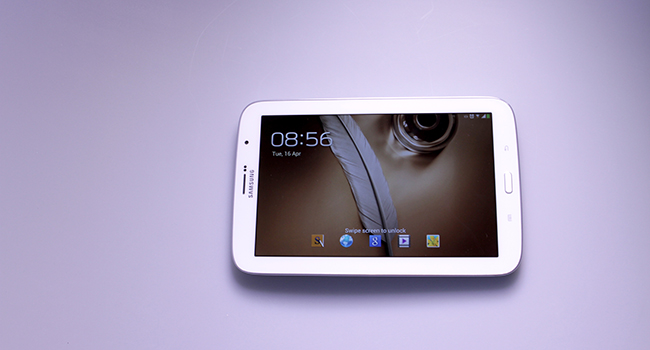 The battery lasts for days or what seems like days without charge. The 4600mAh battery is not as powerful as the iPad Mini’s though, a tablet that can seemingly go a week without recharging, but it gives Apple a good run for its money. Still, the Note 8 is powerful and lag-free, there’s nothing more a gadget owner can ask for.

The design of the Note 8 is superlative. Samsung has taken the Note II and upscaled it until it’s bursting at the seams. But the Note 8 never feels heavy despite its plastic frame. At 340g it’s a decidedly heavy tablet, but thanks to a palm-friendly design, this goes largely unnoticed. In portrait or landscape, the Note 8 feels comfortable in the hands. Not so much for picture-taking though, as the 5mp (flash-free) camera is an afterthought and shouldn’t really be used for those looking to take photos that they’ll be proud of. The front-facing 1.3MP camera though, is greatfor video calls and is both crisp and stutter free. 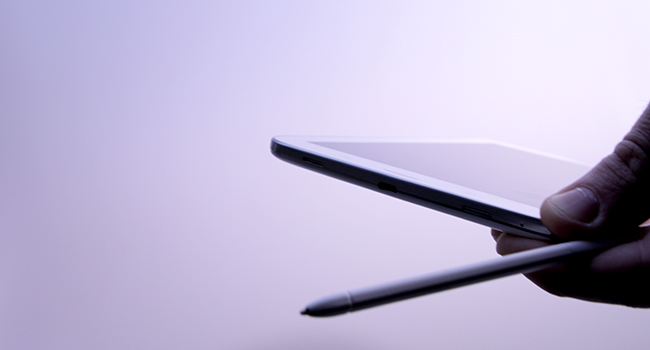 One of my challenges was to also use the Note 8 as a phone, because there’s a SIM slot so… why not? I never really get phone calls anymore, maybe one a day from close family members who have yet to learn how WhatsApp works. Everyone else instant messages me or contacts me on Facebook. Voice calls have seen their day. Saying this, the Note 8 makes crystal-clear phone calls, but you’ll look like a nutter as you squash an ebony-white slab to your face. Still, it works and it sounds great, which is thoughtful design for what is (for tablets at least) a throwaway feature.

With the Note 1 and 2, I felt as if the S Pen was a quirky afterthought. With the Note 8, the S Pen finally gets its chance to shine and becomes a decent alternative to touch input, after a few hours of messing around with the Samsung stylus that is. The S Pen feels sturdy and long enough for adult hands, it’s not a toothpick like the other S Pen’s. It’s especially useful during the MultiWindow function. With a click and a drag, Note 8 users can enjoy the benefit of this larger 8-inch display. The Note 8, like the Note 2, has MultiWindow which lets users share two apps simultaneously on one screen. It works best when the MultiWindow display is one media and one text-based application, lest it get too confusing.

The fact is, without the S Pen MultiWindow wouldn’t work so well. Sure, everything works with touch, but the S Pen elevates the Note 8 above the status of standard tablets. Holding the small button on the side of the S Pen reveals some hardware shortcuts such as screen capture (and a freeform capture), a macro command menu, file preview and quick note-taking with a tap of the pen. It’s a standout feature and an accessory you’ll come to love.

It’s a Note product, that means loads of exclusive applications that only work with the S Pen. The apps are pretty great though, especially aNoteHD, Paper Artist and S-Note. Thanks to the speed of the Note 8, these pen-friendly apps seem almost intuitive in nature. A small warning: those of us with doctor’s handwriting (like me) will have a hard time with the text-recognition portion of the Note 8. It only seems to translate handwritten notes that are neatly written. Go figure. 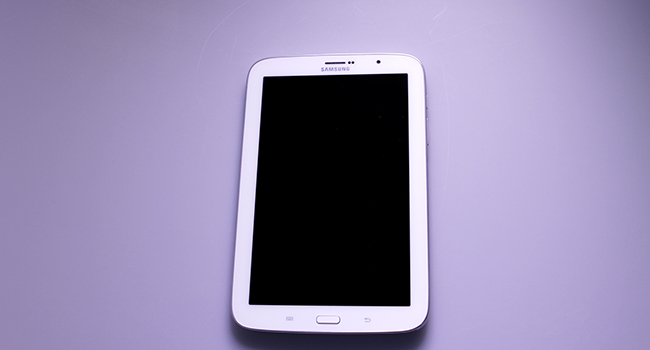 S-Note especially has been revamped for the Note 8. There are now 8 high-res templates to mess about with, such as diary, planner, presentation, it’s all there and it looks great. Great app performance could be associated with Android 4.1, but I doubt it. On the S III, Android eventually became so slow and jerky that I started to wonder what all the Samsung fuss was about. Android 4.1 (Jelly bean) seems to run like a dream on the Note 8, so I can’t discount it, yet.

On the subject of apps, I’m sure that there are loads of users who need ChatOn, Samsung App Store, Samsung Music, Reader and so on, but I’m not one of them. These apps are bloatware, with the Samsung app store being an especially poor example of how software should not work. Every non-S Pen Samsung app seems to be crap. The only official Samsung app that’s worth giving a damn about is AllShare, the content streaming app that sends portable media to big screen TVs and laptops. And even that’s pushing it. If you don’t like the official apps, tough. You can’t even remove them. The best you can do is hide them to the edge of the Note 8.

I think the quick win here is down to Google. When I first turned on the Note 8 it booted up, demanded my Google account details and setup my new tablet, as is tradition. After that, everything just worked. My Gmail was current, my contacts synced, everything was there. Google is the ultimate cloud and beats Apple’s efforts by a long shot. After that, I downloaded Instagram, Facebook, Twitter, WhatsApp, Skype and Evernote and I was good to go. Setup time: ten minutes. Thirty minutes later I was navigating the Note 8 as if it was second nature.

It’s important to “note” this small software fact. Setting up a new device is something I do a lot of, so a lengthy procedure filled with endless downloads and setup hassles isn’t going to sit right with me. Android’s ability to effortlessly save our content and sync it with every new device or installation is boon. Apple’s iCloud does the same, but Android’s just seems better.

Verdict: There’s very little to complain about when it comes to the Samsung Galaxy Note 8.0. It’s fast, looks great, feels well-made, has an excellent stylus and one of the brightest screens I’ve come across. It’s not that affordable though and at US$400 it’s US$100 over the price of most 7-8 inch tablets. But as I said earlier it’s hard to find a better tablet then this, for now. For anycreatives who must have aninputdevice, the Note 8 is a must. For anyone else who has extra cash to spend, the Note 8 is a worthy purchase.