More
Home
Subscribe
Skip
Continue in 10 seconds
Skip
By Michelle Fitzsimmons
Read nextMicrosoft creative director: If next Xbox is always-online we must ‘#dealwithit’ 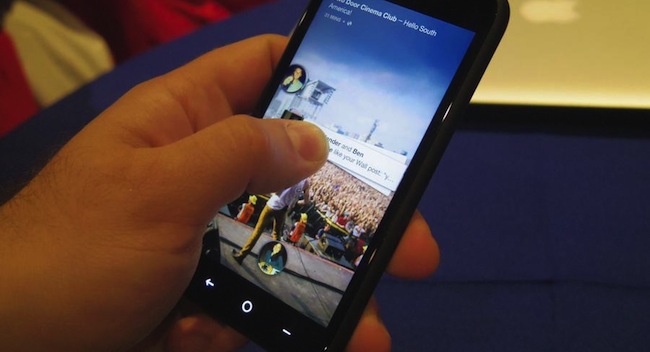 Say hello to the HTC First, the first phone to highlight Facebook Home, an Android overlay newly introduced by the social network. 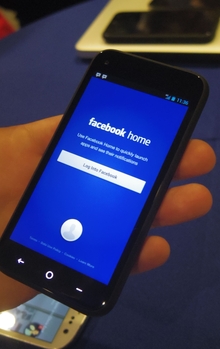 Immediately upon turning on the First (well, after the obligatory Android opening), users are greeted with a log in screen to sync their Facebook accounts with the Home experience.

What Home, and by extension, the First, really boils down to are photos and content. A constant stream of images and captions merry-go-round through the home and lock screens thanks to Cover Feed.

The lock screen is never the same – whenever it’s accessed, a picture of your buddy skydiving, an underwater sea turtle, or the picnic you weren’t invited to occupies the space.

A little bubble of your profile image lives on the screen, a kind of mini-guide that when you press on it is ready to take you to app launcher (on the top), Messenger (on the left), and whatever app you used last (to the right).

Status updates are shown in a larger text to differentiate from photo captions. There’s some Facebook mojo used to show the most interesting/Liked/commented-on images, with an eye to make it so content you would be compelled to interact with what’s shown. 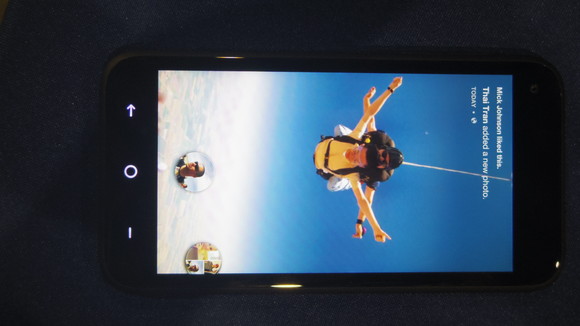 Images are at the heart of Home

As an actual piece of hardware, the First itself is fine enough, though definitely not a sleek, plasticized high-end handset.

Made of a rubberized material, the body is has an almost rugged feel. What is nice is that the 4.3-inch screen feels expansive, offering a canvas for users’ photos to breathe. Resolution-wise we’re looking at 1280 x 720. 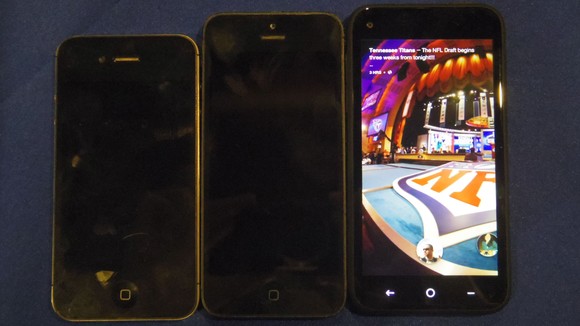 From left: iPhone 4, iPhone 5 and the First

Compared to the iPhone 5, the screen pops in a really attractive way. We almost felt like moths being drawn to a lamp – it was hard to ignore the flow of pretty pictures.

Users can escape Home if they desire in Settings, though their only options are to lower the image resolution or turn Home off completely, a Facebook rep explained.

Turning Facebook Home off will essentially bring the First back to a normalAndroid 4.1 experience. At least at AT&T in the U.S., the First will come in four colors. 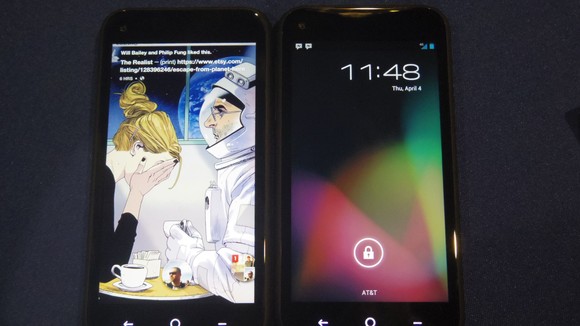 First with Facebook Home on and, on the right, deactivated

There is a Home icon that, if tapped, gives users the option to reactivate the overlay if they like.

There’s a 1.4GHz dual-core Snapdragon 400 processor inside, and we’re told that battery drain of the 2000mAh juicer isn’t too different from a comparable handset, though there is extra drain caused by the Home’s always-active capacities.

Camera functionality is an two-headed beast. Users can either snap photos through the Facebook Camera function (accessible within the app launcher in a bar along the top) or through the phone’s standalone camera app.

The 5MP back snapper is up to task, though perhaps consumers would expect something a little stronger to pick up the pics they’re about to post to, well, Facebook, among other social sites. There’s also a 1.6MP on the front.

According to the spec sheet, we’re looking at up to 16GB internal memory and 1GB of RAM.

A few things stood out to us as peculiar about the First.

Facebook hasn’t forked Android, it wants you to know, but there are definitely some aspects that are, shall we say, unique to the Facebook Home and First experience.

Something we found quite odd was that your profile pic button, floating above the bottom of the screen, doesn’t actually take you to your profile when you click it. An FB rep said that you have to take the normal route to get to your page, i.e. through the Facebook app, and that’s “probably something we should think about” in future iterations.

We understand that pressing on it serves as a gateway to other functions, and as the same rep told us puts you at the center of the phone experience, but intuitively one would think your profile picture would take you to your profile.

Another semi-off putting element is that you have to go to the app launcher to access the actual phone function. The focus truly is on Facebook and communicating with your social network through features like Chat Heads, essentially bubble-headed icons of friends that wobble onto your screen when they message you. These heads follow you wherever you are on your phone.

The back is plain indeed

Even if you launch an app, your Chat Heads will stay present wherever you put them on your screen. A tap on the topmost opens all conversations, while holding a bubble and swiping it down pops them off your screen. You could keep conversations going for as long or as little as you like, and the icons will appear as soon as you receive a new message.

Chat Heads work with both Facebook messages and SMS, so there’s continuity with your text-based communication avenues. It’s a nifty idea, though definitely a different way to communicate. 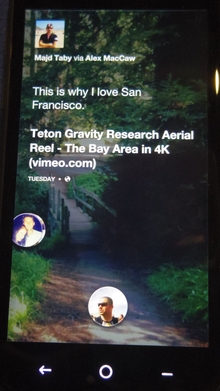 While it’s not necessarily a bad thing, it was jarring to look at what essentially is a wallpaper only to have it suddenly switch. After some time this would likely be less bothersome, but initially it was a weird feeling to see something you expect to stay static move.

This is an HTC phone built-in conjunction with Facebook to make you use Facebook on an almost constant basis. If that’s attractive to you, then you’ll like the First.

We hesitate to say “love” because the hardware isn’t overly compelling, though it’s hard to argue with aJelly Bean handset that costs $99.99.

There are some odd elements, as noted above, that one must accept as part of the Facebook Home overlay experience. Thankfully, there’s choice as to how you use Home, though your options of what stays and what goes is extremely limited.

If you want to leave your social network behind while you’re on vacation, at least you have that option. Of course, the flip side is you can stay pretty much in constant contact while your out of your normal surroundings as well.

We found navigating around the device took some getting used to as it didn’t mesh with the usual Android UI, but since the icons are built on a tactile, spring-inspired principle of movement, eventually we got used to gestures like shooting our profile picture bubble up to access our apps.

Is this a successful first try at baking Facebook into an Android device? We give a reserved yes, though there are definite areas for improvement. Maybe by the time Facebook and HTC gets to the Second (or whatever it’s called), Home will be all centred out. 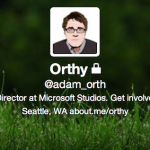 Microsoft creative director: If next Xbox is always-online we must ‘#dealwithit’
Microsoft • 5 Apr 2013
Read More
More