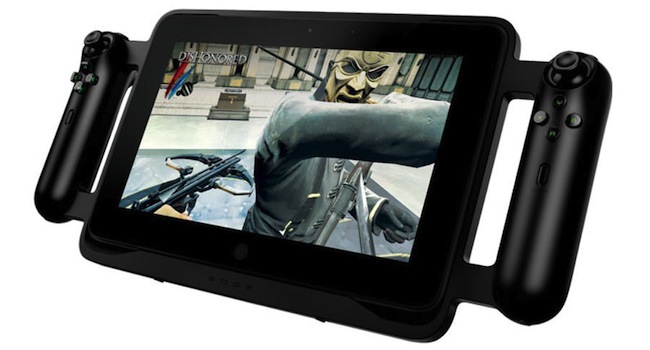 When you hear the phrase “tablet gaming,” what comes to mind? Angry Birds, Infinity Blade and The Walking Dead games? Well what if we told you that Call of Duty: Black Ops 2, Batman: Arkham City and Far Cry 3 were now tablet territory?

That’s the dream being dreamt by the gaming aficionados at Razer. The makers of high-end gaming laptops like the Razer Blade and slick peripherals like the Razer Sabertooth controller now present the Razer Edge.

This Windows 8 tablet for the hardcore set comes in two flavors: Razer Edge and Razer Edge Pro. We reviewed the Pro, which has an i7 Intel processor, 8GB of RAM, a 2GB NVIDIA GT 640M LE and the option of a 128GB or 256GB solid state drive. The lower-end version has an i5, 4GB of RAM, a 1GB version of the same Geforce card and a 64GB SSD. 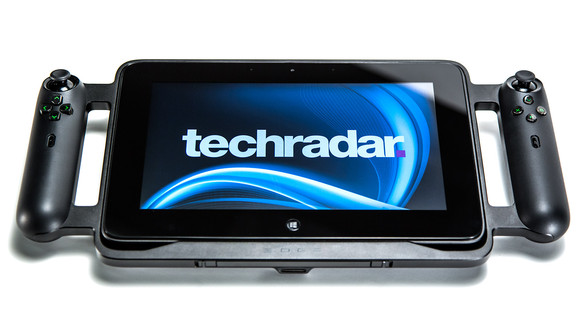 Essentially, it’s a W8 slate with the guts to game, but it’s made player-friendly through excessive accessorization. Sold separately there’s a Docking Station for easy charging and port access, and the Gamepad controller, a one-of-a-kind rig that gives you console style control sticks, bumpers and triggers.

There’s also a keyboard dock coming soon that makes the Edge into a sorta-kinda laptop. It’s not available yet, so we haven’t tried it.

For that kind of money, you could buy a laptop with far more power and functionality than this accessorized tablet. A laptop would be more portable too, since it has no extra gear to haul. These are the exact same reasons that we couldn’t love the Lenovo ThinkPad Tablet 2 and the Acer Iconia W510 as much as we wanted to.

Still, while it lacks portability and affordability, the Razer Edge does have two big things going for it: power and novelty. As far as playing the latest AAA titles goes, the Edge delivers, to a surprising degree. It didn’t blow away our benchmarks, but we spent hours gaming on this puppy, and it did not disappoint.

And it’s just freaking cool. When docked in the Gamepad controller, the Edge is fun to hold, and everyone who saw us playing gawked and wanted a turn.

Make no mistake, you can get a gaming laptop with more power and portability than the Razer Edge. But while the Edge is too pricey to wholeheartedly recommend, and the battery life won’t have you playing far from a charger, there’s little else wrong with the Razer Edge Pro, and it’s just plain fun.

Let’s ignore that awesome Gamepad rig for a moment and just think about the Razer Edge Pro as a tablet because, hey, that’s what it is. 11-inches wide and and 7-inches tall, it’s like a Surface Pro, except beefy. 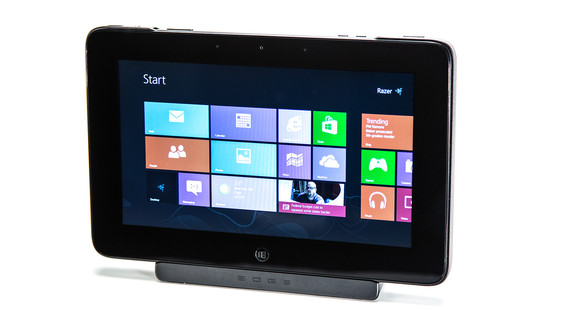 At a little over 2 pounds and 0.8-inches thick, you can tell that it’s packing a little more heat than your average W8 slate. It has some Razer branding on the back, a three-headed green snake that lights up when the Edge is on, like the white Apple logo on a MacBook Pro.

Above the logo you’ll find twin vents. These guys put out enough hot air to blow dry your cat, but do an admirable job of keeping the Edge cool. Don’t expect it to heat up too much in your hands or lap.

It’s got an all plastic body that looks sleek and feels smooth to the touch. The display glass runs all the way to edge of the device, wrapped in a thin bezel. The actual display size is 8 3/4-inches wide, with a native resolution of 1366 x 768, so we’re not in full HD territory.

That display supports 10-point multitouch, as any respectable W8 device should. It’s a sharp, durable screen that didn’t take on any scratches or scuffs after riding to and from work in our backpack.

Bright outdoor lighting gives the display some trouble, especially when viewing dark images, but no more so than your average cell phone or tablet screen. Besides, we’re pretty sure the Razer Edge wasn’t designed to appeal to the outdoorsy type.

On the underside of the tablet you’ll find the Edge’s charging port. It uses a proprietary charger provided by Razer. 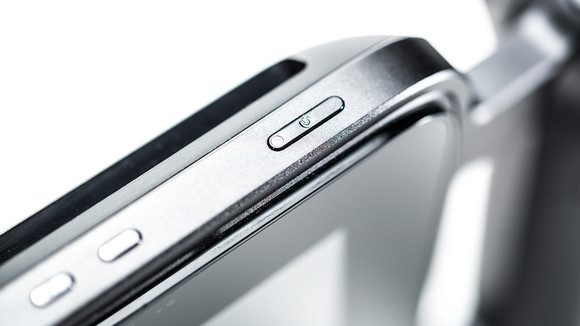 At the top of the machine are a few basic ports and switches. There’s a USB 3.0 port, a headphone jack, volume rocker, a button for toggling autorotate, a switch to summon the W8 on-screen keyboard and a power button.

Since this is a well-equipped Windows 8 machine, you can do any and all basic computing tasks. Photoshop, Microsoft Office programs, all those “legacy” Windows applications will run here. You will want a keyboard and mouse though, which bumps up against Razer’s claims of portability.

You can also just use it like the tablet it is and browse the web or read on Kindle, but the Edge’s weight makes less than ideal as an e-reader. You’ll get tired of holding it upright. 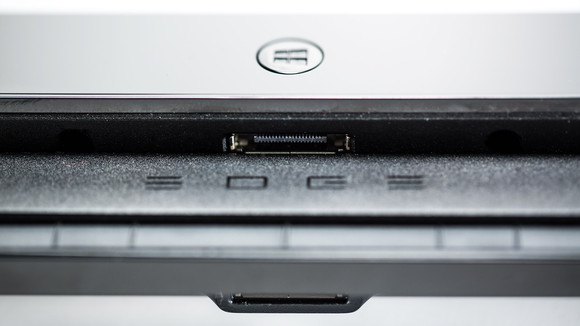 It’s good for watching Netflix though. The speakers are very loud and quite clear, and being able to rest it in your lap or on its dock negates the weight issue.

Overall, the Edge tablet exudes quality design. It feels good to hold, and thanks to beefy internals and a full version of Windows 8, it’s every bit the real deal computer it’s being sold as. However, to do anything outside of the tiled Start Screen, it needs a mouse at the very least. As far as gaming goes, there just aren’t many AAA titles optimized for touch.

And while the tiled Windows 8 interface works perfectly with a finger, the minute you get into the desktop, you’re going to want a mouse, and something to keep the Edge at a proper viewing angle. That’s where the Docking Station comes in.

For an additional $99, Razer will sell you a Docking Station for your Razer Edge. Like the Edge itself, it’s not cheap, but very well-built. It connects to the Edge tablet with a power plug and two plastic pegs. 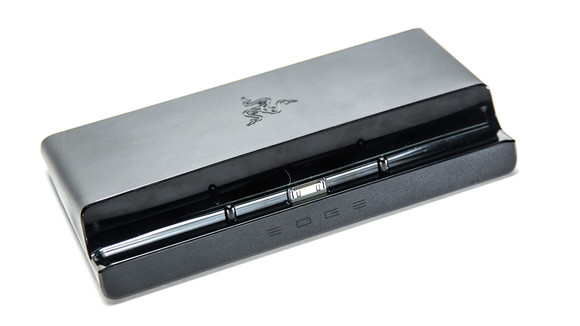 Since the Edge only has one USB port, the dock is the only way you can connect both a keyboard and a mouse, short of going bluetooth. The back of the dock has three USB 2.0 ports, a headphone and mic jack, an HDMI port and power jack for Razer’s charger.

The underside of the dock is covered in an insanely grippy rubber material. It feels like an amped up version of the Gecko material found on the side of Razer mice. It actually takes a bit of effort to pull the dock off a desk. This puppy is not going to slip with your expensive tablet resting on it. 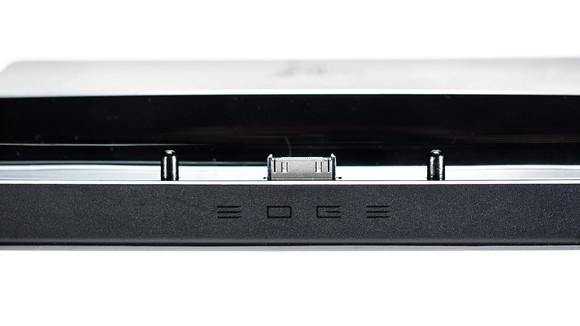 Being able to drop your Razer Edge into the dock for a mouse and keyboard experience makes it feel like something of a compact all in one. Note that we said “compact,” not portable. If we need to haul a keyboard with us, that term ceases to apply.

In our opinion, there’s not much point in owning the Razer Edge unless you spring for the gamepad controller. It’s an extra $249, so coupled with a Razer Edge Pro at $1,450, you’re looking at a $1,700 investment.

That stings, but with the gamepad controller you get a very unique gaming experience, and everything you need to actually boot up and play a game that’s not optimized for touch. 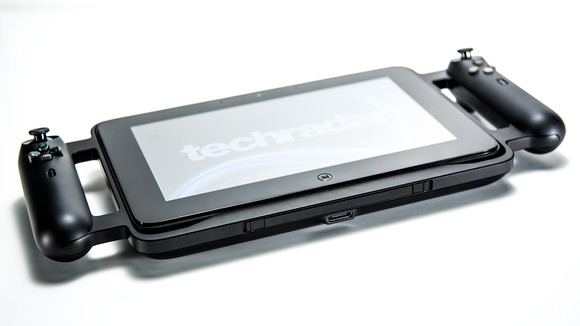 Just like the Razer Edge tablet, the gamepad controller exudes quality construction and feels very nice to hold. It also has its own battery, which gives a much-needed boost to the Edge’s overall battery life.

When the Edge sits in this rig, it feels like you’ve crossbreed an Xbox 360controller with a Wii U GamePad. It has all the buttons and sticks console gamers are used to. Dual analog sticks trimmed with grippy rubber, pressure sensitive triggers, and two sets of shoulder buttons. There’s also a four button layout, quality D-pad and the equivalent of start and select buttons. 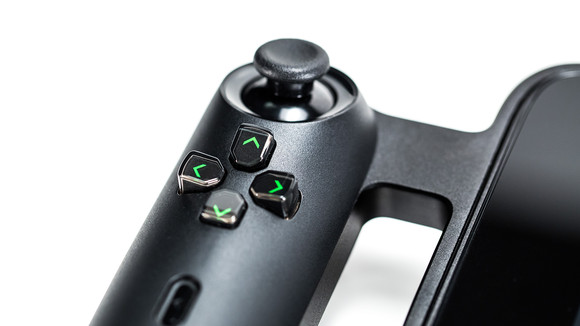 All the buttons give a satisfying press and feel like the result of excellent craftsmanship. We don’t envision them wearing out fast like some cheap, third-party controller. It also has a built-in rumble feature, like many console controllers.

The downsides of this rig are related to bulk. When the tablet meets gamepad the two weigh in at a little over 4 pounds. Holding it upright in front of you is tiring after just a few minutes. The most comfortable way to play is with it resting in your lap, or with your elbows on a desk or table. 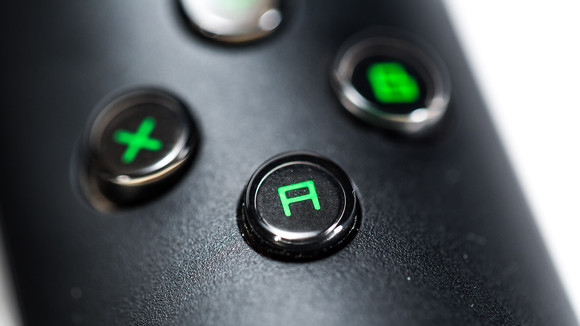 It also puts the kibosh on the Edge’s portability. The Gamepad is big, and takes up a lot of room in a bag. You’ll also look pretty unusual if you pull this thing out to play in public, so get ready for a few looks.

Overall though, it’s a fine piece of hardware, and the crown jewel of the Razer Edge experience. 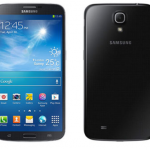