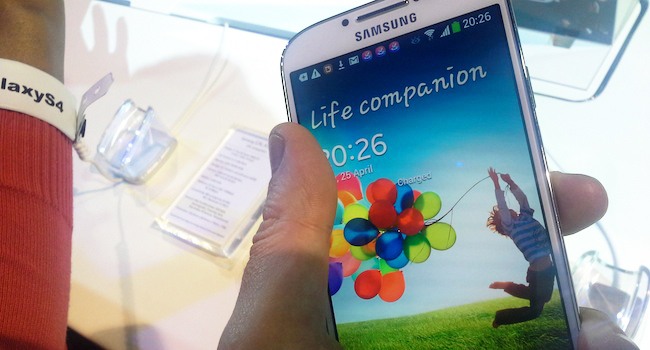 I had very little time to play with Samsung’s Galaxy S4, a phone that is as much a media center as it is a social/mobile/life management tool.

Samsung calls the S4 a “life companion” (what was the SIII then, a weekend fling?) and outside of this silly moniker, it’s a great 5-inch smartphone with some clever features that makes it stand out from the crowd. Here’s what I think of Samsung’s S4, which launches globally 27 April.

The 5-inch screen is a work of master-class. It’s a 441PPI display. 4,4,1. That’s one of the highest resolution per inch ratios on a phone — beaten only by the likes of the HTC One with its 468PPI display. The full-HD screen (1920×1080) displays content better than anything I’ve ever seen. Without a doubt, Samsung has transported a top-of-the-range LED TV into a mobile phone. If anyone ever wanted to impress their friends with a “hey look this phone, please, please look at it” type of situation, the S IV is the way to go. Load up a 1080p film and marvel at the crispness. I wasn’t able to test the sound as sadly the S IV preview event decided to pump its music at construction-level volumes of deafening. Screen response is of course, excellent: this is a Samsung product so expect no less.

I thought the HTC One had a well-designed body, but the S4 beats it hands-down. The phone is thin, light and comfortable to hold. This isn’t the place for stats, but at only 130g in weight, this is one of the lightest smartphones (of this size) on the market. It eschews the “nature” theme of the S3, going for a standard rounded corner rectangle shape that is modern and fetching. I don’t even want to compare it to the iPhone 5 or HTC One.

The S4 is in a class of its own, with an almost edge-to-edge screen design that after a while, has the effect of making the phone seem as if it all screen. The bottom and top of the phone seems to melt away. It’s like Samsung knows our fingers and even with gloves on (I tested with a cloth) the touch capabilities of the phone worked well. Smart stay, Smart pause, Smart scroll all worked as intended, but I feel as if these will be turned off after the novelty wears off. 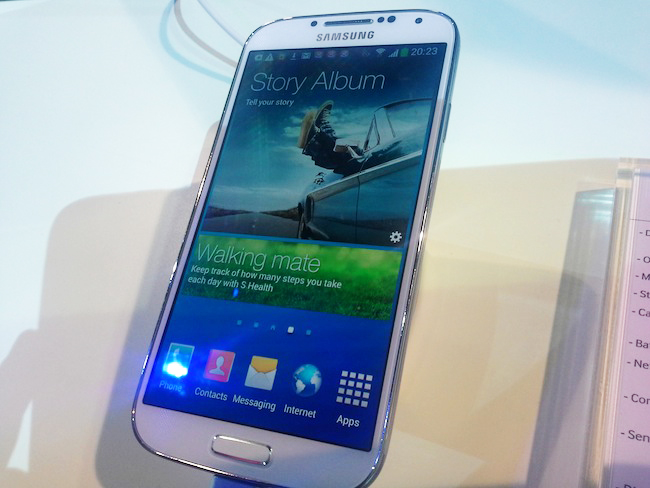 This is the Galaxy S4's Story Album app, which lets you create scrapbooks from your photos. 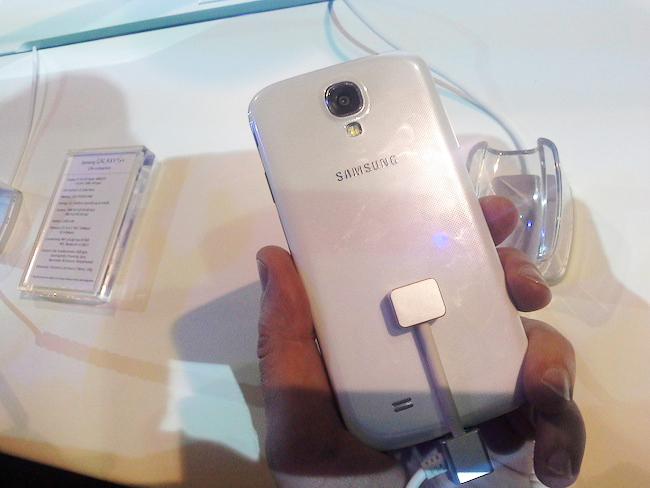 The back is slightly dimpled, with a centre-mounted camera and flash. 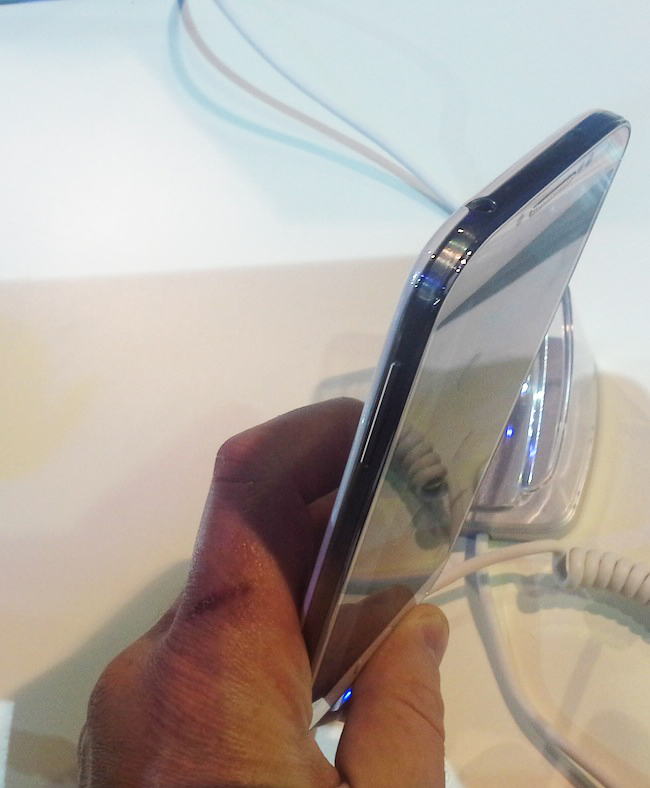 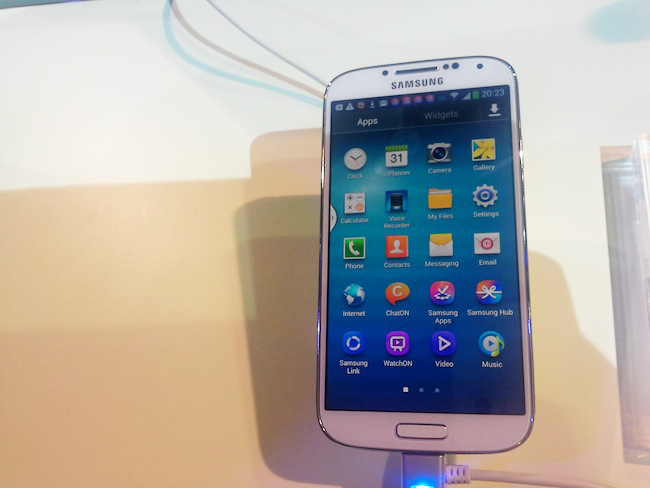 The phone is gorgeous to look at in real life. 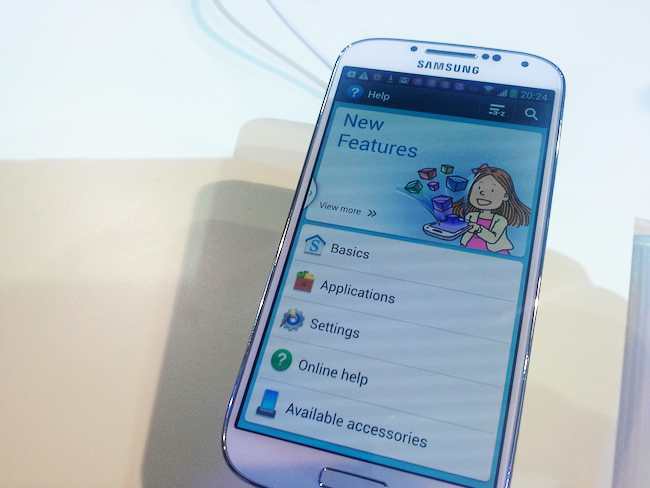 The very friendly help screen of the S4.

Home screen of the S4. 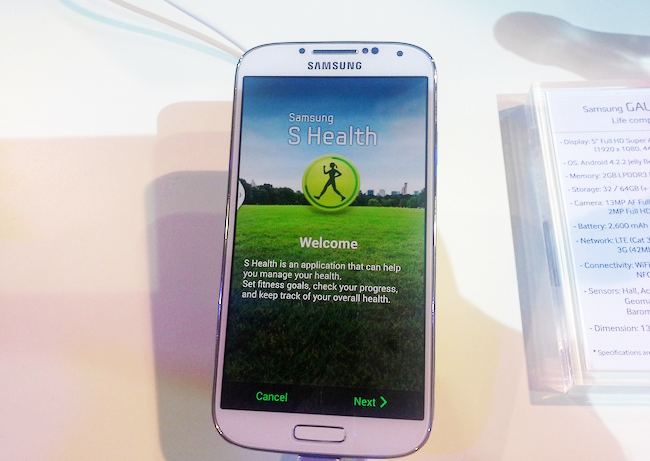 I hope the accessories come out as well, they look exceptional. 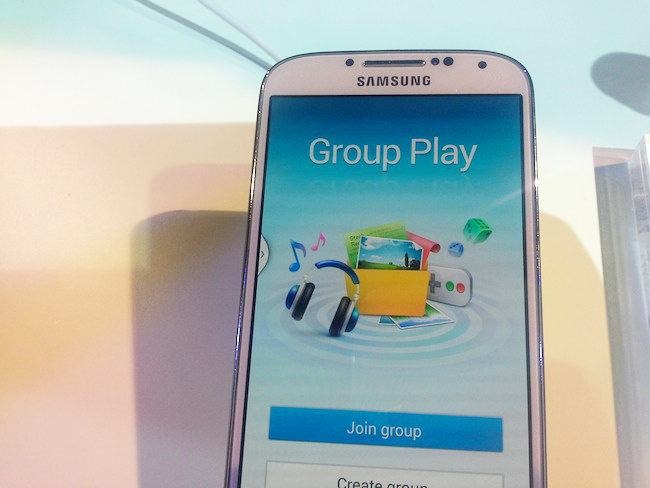 And here’s Group Play, the feature for sharing content with other S4 users. 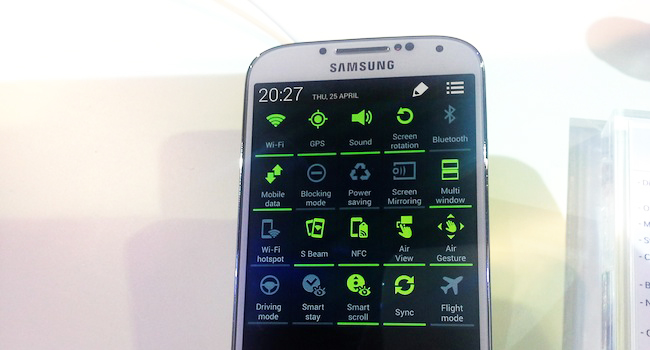 The notification tray of the S4 is immense. It’s the longest I’ve ever seen.

Fast is an understatement. The S4 has a Quad-core 1.6 GHz Cortex-A15 and quad-core 1.2 GHz Cortex-A7 CPU. What does that make it then, the new heart of the solar system? What I would have liked is if I could have stress-tested the device over a few weeks, but all I had was the Android version of Sonic the Hedgehog 4. On the 5-inch screen, Sonic looked as good as it does on any console and it seemed to run slightly smoother when compared to the BlackBerry Z10, HTC One and the Note 8 version. Clearly I love Sonic if I have played it on four different mobile phones.

But there is one task that kills most mobile phones, and that’s streaming two HD films at once. One the S4, using VLC, the stock video player and YouTube, I ran three 1080p videos at once. All streamed, nothing slowed down. When I have more time on my hands, I’ll place the phone under a battery of tests.

The apps and extras

The S4 is an exceptionally gimmicky phone. Air View is the worst offender of this. What Air View does is allow you to hover your finger over certain apps for additional information, kind of like with the Note 8. It’s very choosy though and only seems to work with a half the apps I tested it with.

Smart Pause, the feature that pauses a video when you’re not looking at it, works. There’s really nothing more to it but to say that it’s a cool gimmick at least. It also seems to work with every type of video content, regardless of which app it resides in.

Group Play, the king of superfluous features, remained untested. If there are other S4 users in range, Group Play lets you share music and video. In the demo Samsung showed us, it looked inane, with a collection of jocks all playing the same horrible pop song. You know how irritating it is when people play music through their phones loudspeakers in public? Imagine that times ten. On that note though, the sound on the S4 was loud and crisp. I’d go as far as to call this HD sound, it’s that clear. Sadly I could not test a phone call, but I’m positive that it would sound almost Skype-like.

Air Gesture works about as well as those automatic hand driers in public toilets. Sometimes it picks up your gestures and works, other times it won’t. It’s a bit of an exercise in frustration and where I wanted it to work most (photos), it wouldn’t. When Air Gesture does work though, it’s charmingly impressive. With a few more tweaks, this feature will be ready for the big time.

Smart Scroll sucked: by detecting the position of your phone or head, the S4 scrolls down a page. Getting this to work was impossible and I had to contort my neck to stop the screen from shooting up and down. Here’s my advice to you: most of these extras are turned off by default. Keep them off and you’ll have a cleaner, more usable S4.

Despite the gimmicks, the S4 is one of the largest, prettiest and most responsive phones on the market. I’m in the position of having tested most if not all of the best devices of 2013 (HTC One, BlackBerry Z10, Samsung Galaxy Note 8, Lumia 920, iPhone 5) and once I’ve had a good few weeks with the S4, I’m sure that it could stand head and shoulders above the rest. 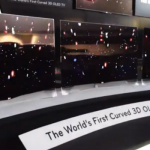