Your future iPhone 6 could have invisible buttons that appears only when needed. Apple, being the cornerstone of tech aesthetics and rumour mills, never fails to impress. This patent recently granted by the US Patent and Trademark Office lets Apple design products having invisible controls (buttons or sliders) that would only appear when needed.

Aesthetic appeal is one thing, but most phones are seamlessly designed around its button interface. The patent titled “Disappearing button or slider” states that “too much display area is occupied by display elements that are not needed except at particular times.” The button will only be “active” when you need it so that the beautiful design isn’t compromised by its practical interface.

The patent describes buttons potentially being backlit and motion or touch responsive. It also makes reference to similar technology found in your laptop’s trackpads but are of better material. Meaning that if you wanted to press a button, you’d simply hover or tap your finger over where it is, and it will seamlessly appear. So that “various controls on the iPhone and other devices would normally stay hidden and fully appear only when needed.”

We love tech rumors. Especially when they’re backed by leaks, anonymous bloggers or, as in this case, patent claims. They give us insight and tips as to what is to come. What will be the next big thing? This design feature is something that could potentially catapult, the already dominant aesthetic tech leader, even further ahead of its competitors.

Now this being an approved grant, we can only speculate and drool over its potential. Could this be the direction the iPhone 6 will be going? Just imagine a device beautifully designed that, when needs be, glows the volume rocker as a slider for example. According to this CNET article, the patent also describes other devices so that “on a laptop, a certain touch-screen control could become visible when a DVD is placed into the drive or a camera is inserted into a USB port.” So this could be the first hint of what Apple’s next-gen products could be like. 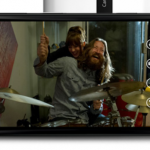