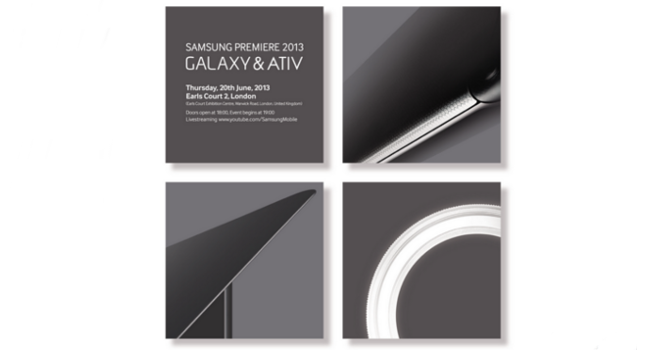 Samsung is set to announce new devices for both the ATIV and Galaxy series at the “Premier 2013” event which has just been announced. Rumors and leaks about what is to be expected points at two new Galaxy phones as well as mobile devices for Windows 8.

“GALAXY & ATIV” reads the slogan together with three mysterious pictures to tease. Although speculation, the announcement of the Samsung Galaxy S4 Mini shouldn’t be far off. As the name suggests, this could simply be a smaller version of the Galaxy S4. Another device, the Galaxy Active, is also expected not to be far off. According to Android Central, leaked images and specs suggests that the phone is “a ruggedized, water and dust-resistant version of its flagship.”

The announcement of the event gives us a taste (although not much to go on) of what is to come. The three pictures shows us indistinct angles of what might look like a tablet and another looking like a new mobile. These images are made even more mysterious with another glowing sphere seemingly not fitting in with anything in particular.

Samsung announced the ATIV series last year, putting all Windows 8 devices under one tidy umbrella. The company is yet to bring out the big guns in the Windows 8 arena though.

Windows and Blackberry OS have been like kids fighting in the rear view mirror of your car. Both have been competing over the so-called “third-pillar” of the smartphone market while iOS and Android lead the way in second and first place. While Windows 8 has been slow to catch up in the mobile arena, it still managed to overtake Blackberry’s OS as “shipments had dropped to 6.3 million in the first quarter of 2013.” So, Samsung seems to be seizing this opportunity to bite into the growing market share of Windows 8 devices.

The Premier 2013 Event will be taking place in London coming 20 June. Are you expecting the Active or the Mini to make their debuts? Or do you think Samsung’s Windows 8 devices will steal the limelight at the event?