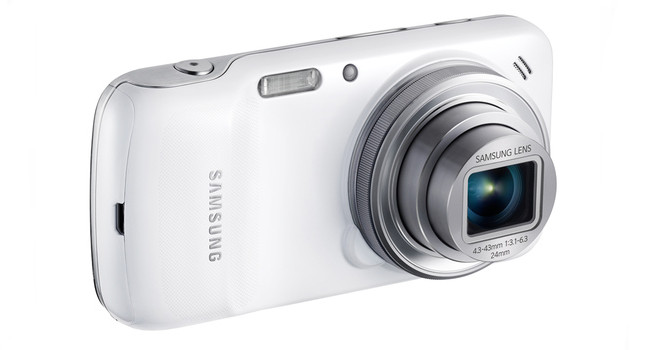 Samsung just unveiled the new S4-variant namely the S4 Galaxy Zoom. Samsung seems to be on a spin-off spree after releasing more and more models based on the original flagship S4. As you’d expect, the main feature of the S4 Zoom is its camera. This smartphone packs a massive 16-megapixels and a 10x optimal lens.

On the aesthetic side of things, the Zoom looks like a fusion between the white S4 Mini and a small silver digital camera lens at the back.

On top of the massive camera, the Zoom also hosts specs very similar to the Mini. The 4.3-inch 960×540 display will be powered by a 1.5GHz dual-core processor powered by a 2330mAh battery. In the memory side, it has 8GB of internal storage which is expandable via a microSD slot and 1.5GB of RAM. It will run Android 4.2 Jelly Bean and is LTE compatible. It also has a 1.9MP front cam. Given these specs, the Zoom weighs a massive 208 grams and is 15.4 millimeters thick.

The 16MP BSI CMOS Sensor will also feature Optical Image Stabilization and Xenon Flash. And like with all Samsung’s products, the phone/ camera hybrid will feature some interesting apps such as Smart Mode to help your photos look more “professional” and Drama Shot that merges continuous shots of moving objects into a single composed image.

JK Shin, CEO of Samsung Electronics IT & Mobile Communications Division, notes that “as communication continues to become increasingly visual in nature, people wish to capture and share their moments in the highest quality possible.”

There has been no official wording of the price and availability as of yet, although based on the specs, the Zoom’s price will probably be as heavy as its weight. However according to rumours, the S4 Zoom is scheduled to be launched in July and priced at around US$618. The S4 Zoom will most likely be competing with the likes of the Nokia’s Lumia EOS.