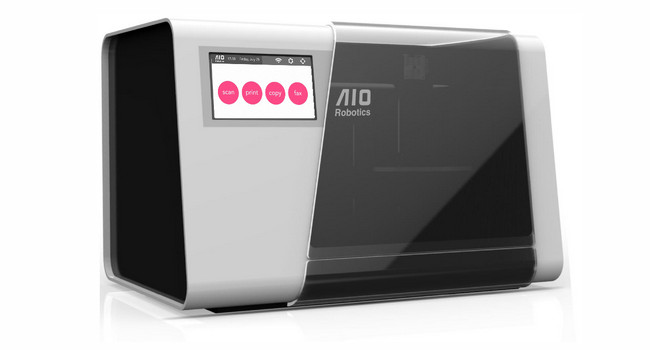 Created by AIO Robotics, the ZEUS multi-purpose 3D-printer has started a funding campaign on Kickstarter yesterday. In 24 hours it already raised more than US$90 000 out of the US$100 000 goal.

The project runs until 4 October and you can get a ZEUS 3D-printer for somewhere between US$2000 (early bird) or US$2800 with general shipping due next year July or August. The price of the ZEUS is steep to say the least but hovers around the same price tag as the MakerBot Replicator 2 which goes for US$2550. Of course, price isn’t the only thing that would make or break products such as 3d-printers but it definitely narrows the markets down.

What would you want to scan? Well, in the video there’s the example of the ZEUS being able to capture enough detail so that you can reprint a key for instance. There’s also an example of a little kid making a blue snowman out of putty who then faxes his creation over to his presumed dad. It’s meant to be that simple. “We want to make a machine that you can take right out of the box, and start to print.”

The ZEUS is designed to be as user-friendly as possible. “You put an object into the machine, press Fax, and it will be replicated on the other side of the world.”

Instead of creating objects using 3Ds Max or the likes, the user is introduced to a 7-inch touchscreen that gives the machine a welcoming “consumer ready” look. There is no extra computer or wires required. Apart from being user-friendly, it’s also meant to be software friendly as you can print any 3D model from a CAD-program, 3D scanner, or an online marketplace. The design also looks stable and stylish.

On the other side of the world in Italy, a cheaper variant called the FABtotum Personal Fabricator is also running a campaign on IndieGogo. It has a couple of tricks up its sleeve while keeping the price low and the design as open as possible.

The FABtotum is also capable of doing a range of interesting tasks such as printing, cutting, milling, scanning and manipulating objects. The FABtotum can engrave and cut objects or patterns out of many different kinds of materials including wood, light aluminium or brass alloys.

The FABtotum is also said to be open-source meaning that you’ll have the option of wither ordering it already-assembled, as a kit or going DIY and building it up from scratch with all given plans and necessary components. Given this open design, the FABtotum is also powered by Arduino and is easily customizable. It costs half that of the ZEUS as it’s available between either US$1000 or US$1100.