Here’s a secret: Samsung’s latest cutie, the Galaxy Round has quickly grown on us. While it may only be a melted-in S4, the Round is the first original phone any of us have seen in an exceedingly long time. And here’s ten reasons why we think that the Round is one of the best phones to come out this year. It really is. Can you imagine how nicely this will slide into our pockets, or feel against our ears?

Samsung makes some great camera phones, such as the S4 Zoom. A 13MP sensor should produce some stunning shots.

With MicroUSB 3.0, both charging and transfer speeds will be considerably boosted.

Is anyone ready for this? LTE-A is faster than most wired connections and could change the face of wireless internet.

5. It comes in stylish Luxury Brown It may only come in one finish, but it’s the best-looking finish we’ve ever seen. Most big-screen Samsungs have this, and with the enhanced CPU speeds Multi-Window is smooth and actually useful. It’s still heaver than the iPhone 5S though. But look at that screen, or marvel at it really.

8. It could be Samsung’s best display ever Watching anything in HD is going to look absolutely incredible. And did you know that curved TV’s will soon be the norm?

9. It has that nifty roll effect

By rolling the Round towards you, it’ll display the time, date and any missed calls or notifications. This rolling effect will also scroll through content and skip music tracks.

All other images via Samsung Tomorrow 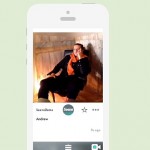