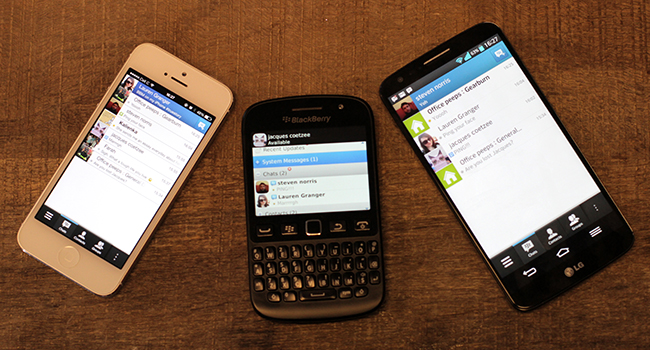 I waited a long time for this, and it’s here, but was it worth the endless delays? BBM for Android and iOS is exactly the same as BBM on BlackBerry, minus some features. It’s also apparently been downloaded over 10-million times since release. Is this app enough to keep BlackBerry in the public eye while it recoups from fiscal hell, or is it simply the final nail in the coffin for a company that, for most, died out long ago?

Think of it like this: with the app, there’s now less reason to own a BlackBerry. BBM (and free internet) was the calling card of the ugly, yet sturdy older generation devices. But most of us have outgrown them and moved on to phones with a feasible future. If you used to have a BlackBerry and miss BBM, download the app when it’s available for your device. If you never had a BlackBerry or don’t have friends on BBM, there’s no real reason to use BBM instead of the far more intuitive WhatsApp.

But right now, I’m speaking directly to the 10-million strong fans who’ve downloaded BBM for Android/iOS, and the ones who have yet to grab it. BBM is a sturdy instant messaging app, with a connected database of users that stretches back into the dusty ages of smartphones. But it’s nothing revolutionary, and needs a few updates before it’s as good as the BlackBerry version of BBM.

If you’ve used the new BBM on the Z10, Q10, Q5 or Z30, then you know what to expect. If you haven’t, then you’re in for a piecemeal experience. BBM for Android and iOS is, well, functional. And fast — boy is it a nippy app. I remember on my Z10 how the BBM app used to lag. There’s no such issue with my (admittedly blazing fast) LG G2, but there was also no speed issue on an iPhone 5, or the BlackBerry 9720 we happened to have lying around.

Once you’ve signed up for BBM, which takes a minute or less, you’re presented with a homescreen of contacts in a grid or list format. The five main chat options, accessed by swiping the screen to the right are Chat, Contacts, Groups, Updates and Invites. Chat has all active contacts listed, with the option to start a new chat if needed.

Contacts is the easiest way to start yakking. Just click one of your mates pictures and start talking. It’s definitely a more visual way of chatting, and works for me. 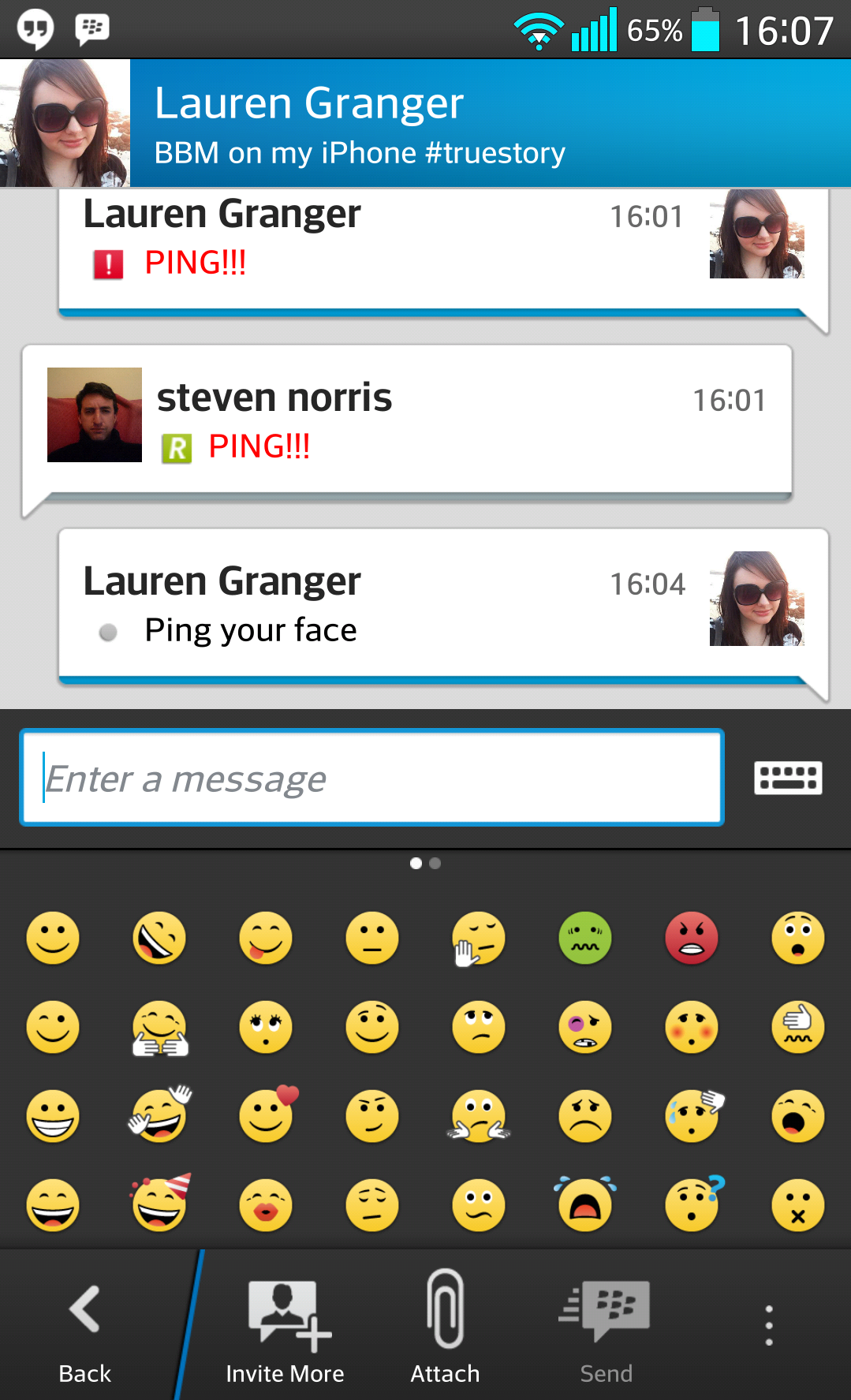 This is how you grab attention from your friends. 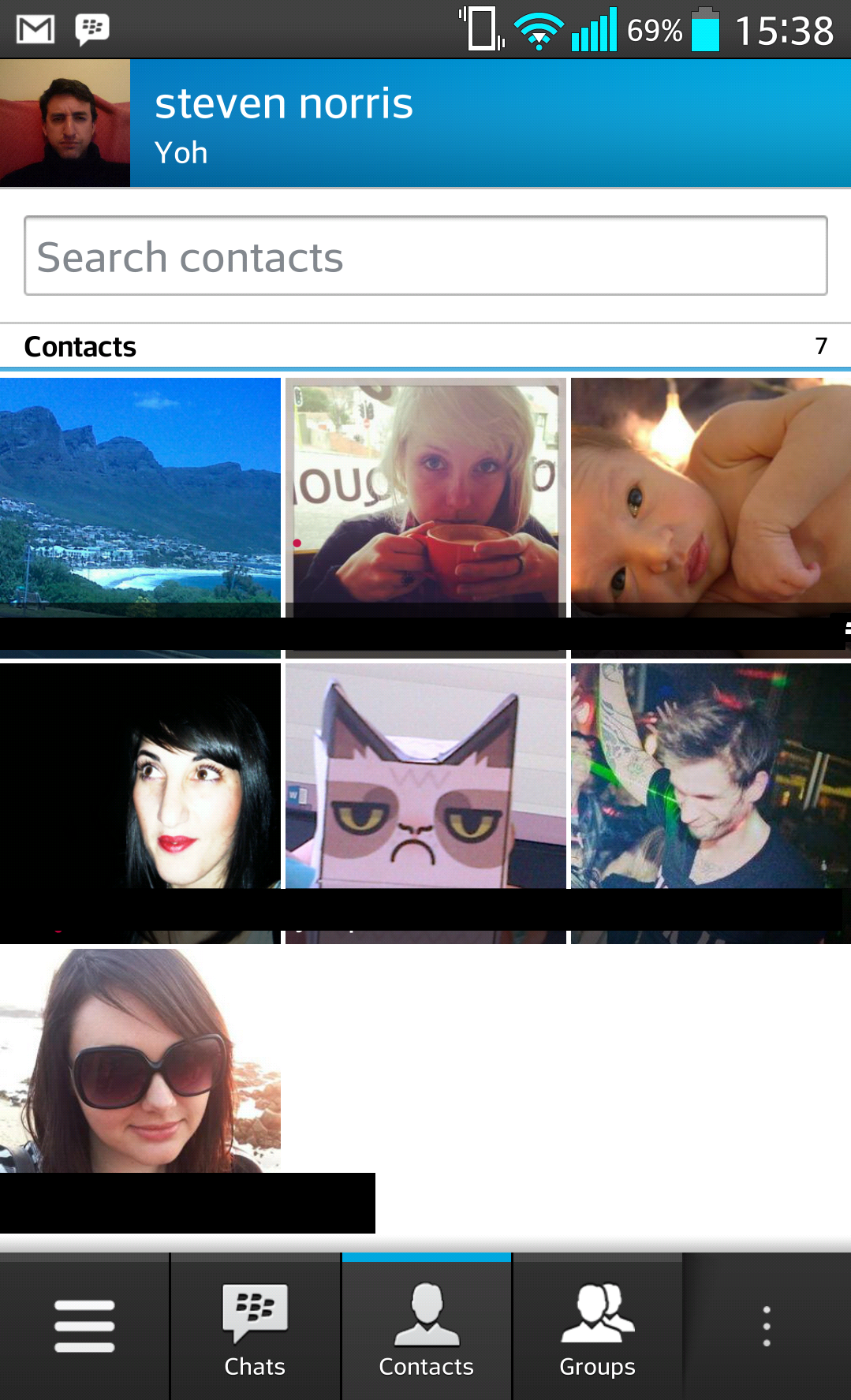 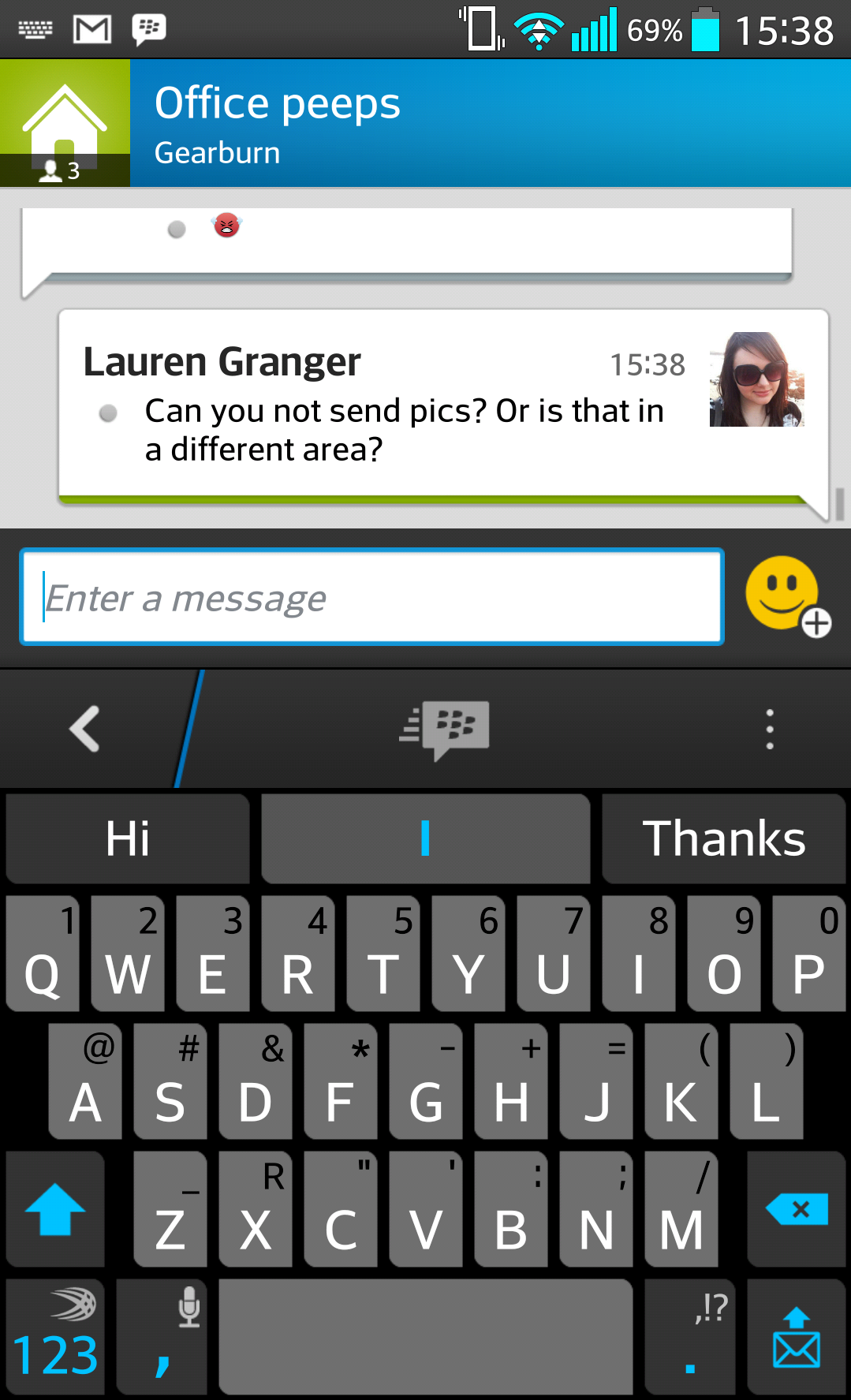 Chatting is bare bones, but functional and quick. 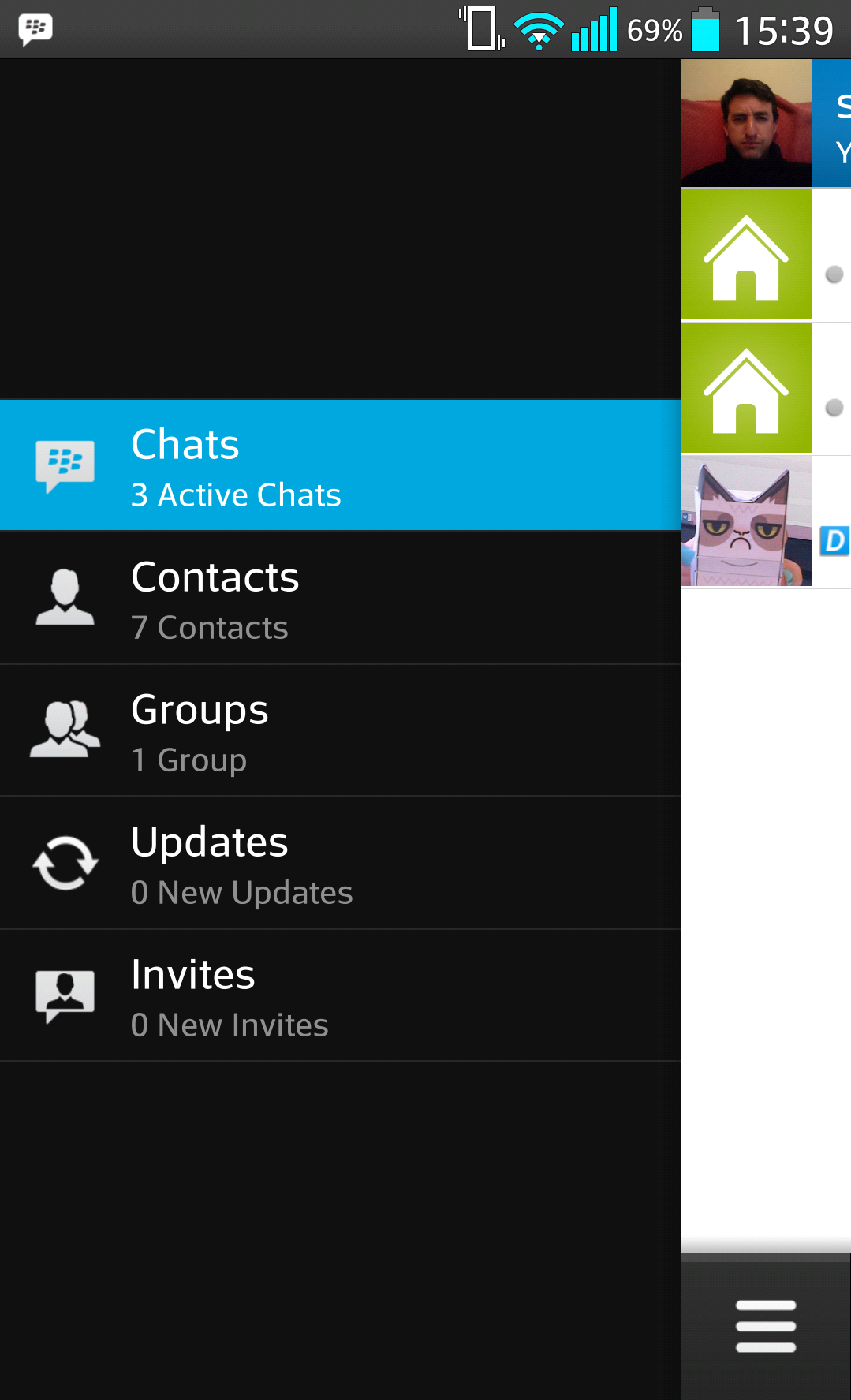 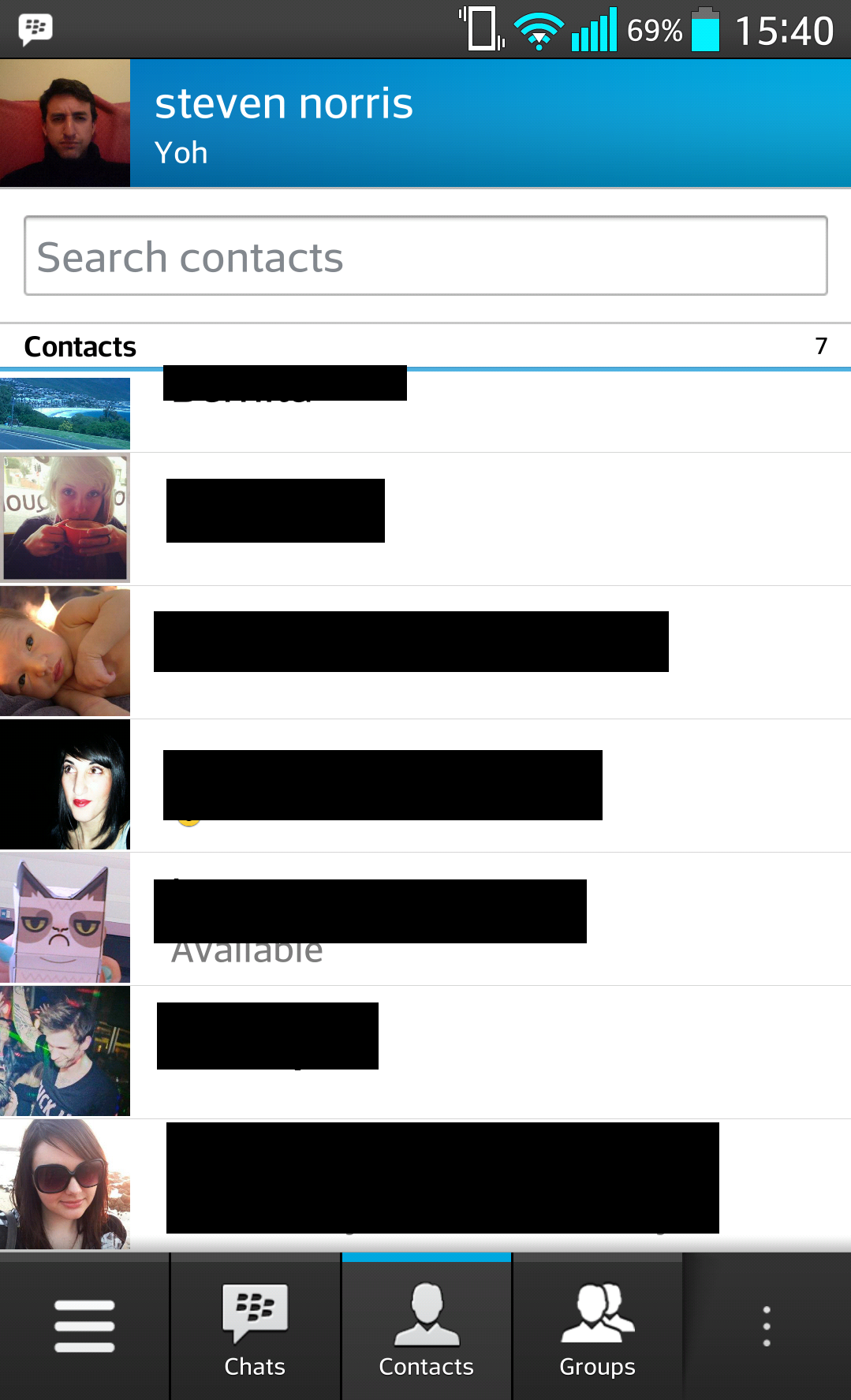 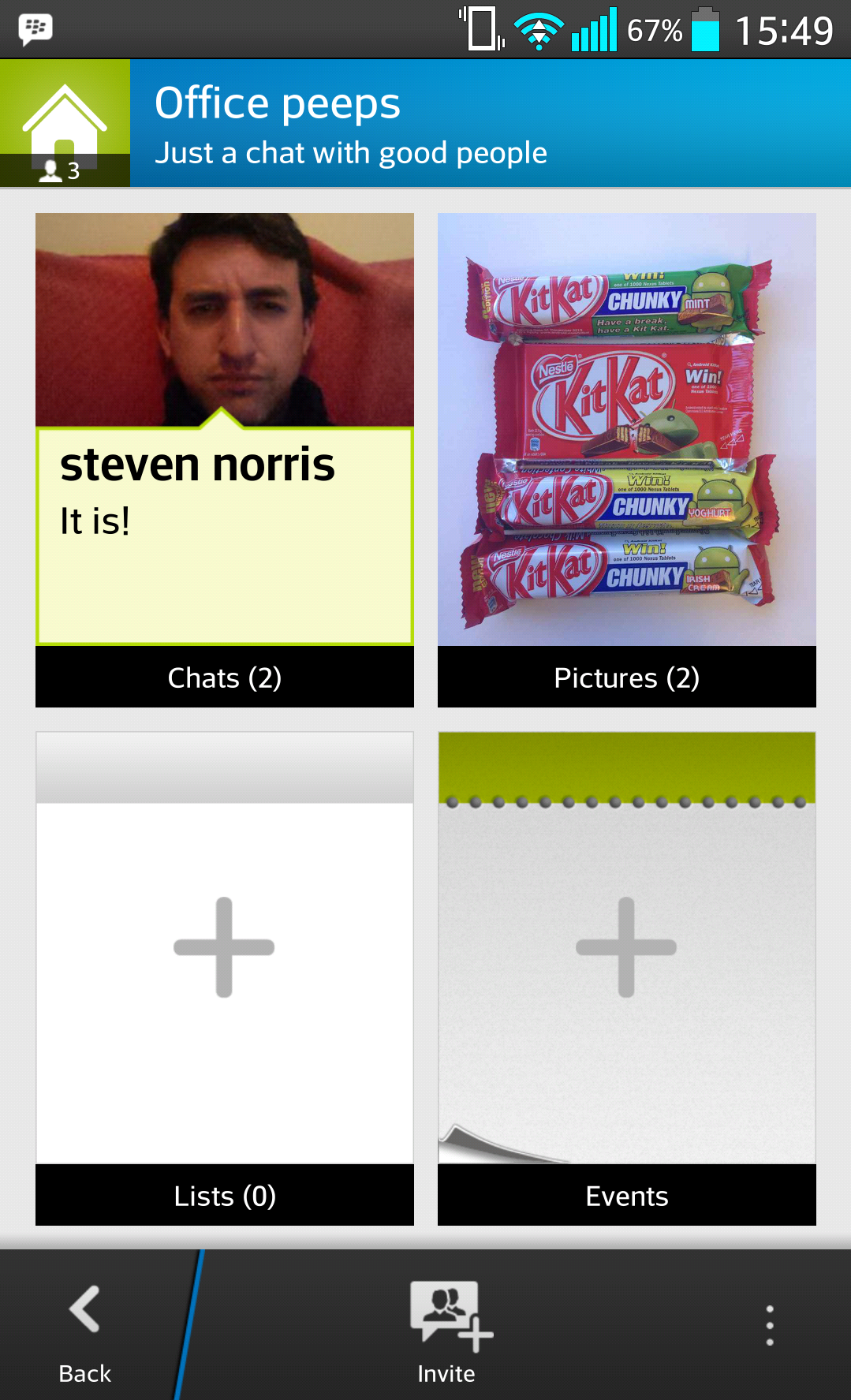 Groups is a good concept, but is poorly implemented. To start a group chat, you click groups, the “…” or further options button, “create new group”, enter a group name, invite members and start chatting. BBM needs half these steps if it wants us to use Group Chat, plus there was the issue of the BlackBerry 9750 test user not being able to see any of our chats. It was cleared up, but only after a lot of fiddling and the user still didn’t receive all our messages. Away from the group, we were able to separately speak to him though. On the created group, there’s an option to add pictures, lists and start events. It’s a weird experience, like somehow BlackBerry has squeezed OS 10 onto my glorious Android.

The menu options I described here are all available on the bottom menu bar of BBM, minus Updates and Invites. It begs the question though: why even have the separate swipe menu? I guess for easier access, but once you get used to BBM you’ll use one or the other. Using both seems counter-intuitive.

The settings menu has a few options which are off by default such as chat history, show my country and time and vibration for notifications. This is fairly thoughtful of BlackBerry, as new users won’t have these intrusive features switched on unless they specify it.

So really, why use BBM over its cross platform competitors? Because it’s more social network-like than other chat apps. When your friends update their statuses on BBM, it shows in Updates. Whenever your contacts update anything at all, it’s there in Updates. It’s a great way of staying connected and updated actually. Plus, BBM has a UI that is functional and fast. Also, it has Ping which sends an annoying sound, plus the word “PING!!” to someone who’ll soon unfriend you.

In an actual chat window, there are options for sending contacts, attaching content, Pinging and “copy chat”. Also, BBM has some unique emoticons that WhatsApp simply doesn’t. Our favourite: the face-palm smiley. A classic.

Chatting is quick and simple. Click on a contact, type a message and send. BBM has options that tell us if a message has been sent, received and read which makes it hard for the person you BBM’d to ignore your message for too long. I enjoyed how simple the chats are, and how streamlined it makes messaging large groups of people, or single contacts. It’s just not as slick as WhatsApp.

Verdict: BBM for Android and iOS does exactly what it sets out to do and nothing more. It’s missing some of the advanced BBM options such as video chat, but BlackBerry is working on adding extra functionality in future updates. So, take it for the social network-like appeal and the ability to see if someone has actually read your messages or not. Ultimately though, and if you want to chat to your friends on BBM but hate the thought of owning a BlackBerry, this free download will do.

Download BBM for Android here, and for iOS here. 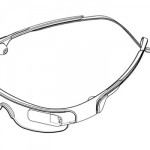