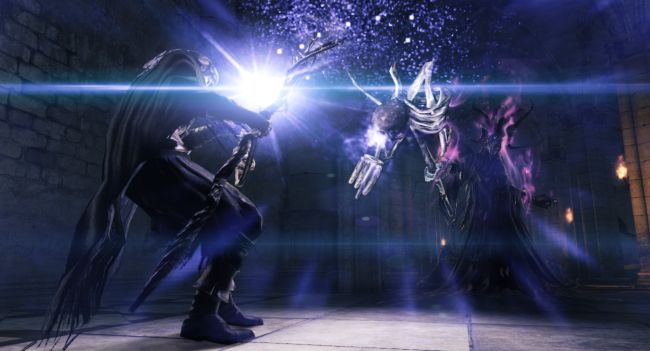 Having played the original Dark Souls, I was pretty prepared for the game’s infamous and often frustrating difficulty level as well as having fairly high expectations for its compelling story and unforgettable boss fights. I have to tell you though, that Bandai really isn’t kidding when it states “Prepare To Die… Again.” in the about section of the game’s website.

Having snuck into the rather impressive (and suitably dark and brooding) display stand for Dark Souls II before opening time for South Africa’s biggest gaming expo rAge over the past weekend, I had ample time to give the demo a good play through. To give you the opportunity to fully experience the game, if you didn’t have the chance to play it, I think I shall get a little lyrical and bard-ish to explain my experience…

As the darkness lifts, I groggily push myself off of the floor and stumble upwards, wincing from the sound of my swords scraping along the ground. The lime and sandstone walls surrounding me are overgrown and filthy, the door of my prison long-since rotted away. I move forwards into the unknown dungeon, taking in my surroundings and looking for any clue as to where to proceed next. I come across a rotting corpse, lying face down on the fetid floors, an ominous sign of life long-since perished in this forgotten place. I step forward, but the corpse shudders and suddenly stands up, brandishing a wicked blade. I take a swift swing at the creature with my blades, striking it, but not killing it and it returns the favour mercilessly and with surprising skill, catching me off guard and wounding me. I stumble backwards, injured, but ready to attack and lunge forward, only to be confronted by another undead warrior with a massive battle-axe. I fell the first one, but the second is already swinging his weapon at me, killing me in a single blow.

Horrid red letters appear in front of me as the screen fades to black, coldly decreeing: “You Died.” I look downwards, seeking something to blame, but instead simply state: “Well that sucks.” and try again.

Now I shamefully have to admit something: that little story must have been repeated about four times before I actually managed to beat the two warriors in that particular section of the level. I’d like to think that I’m a fairly decent gamer that’s capable of adapting to hard difficulties, but to say that this game has a learning ramp (not curve), angled at 90 degrees would be an understatement. That being said though, the Dark Souls series is by no means aimed at entry-level gamers and makes no qualms about how unforgiving it is. Within half an hour of playing, I had died about 12 times, with two of those deaths simply being from falling after a minor misstep on some nasty precipices that are littered within the game’s world. This game is hard. Unrelentingly hard, but that frustration factor actually ends up being pretty compelling if you’re slightly masochistic and just ardent enough to succeed. Graphically, Dark Souls II is looking vastly superior to its predecessor, which was actually pretty underwhelming in comparison to the other RPG games that were available at the time of its launch and I often got distracted by the level of detail that was evident within the demo’s landscapes (hence the flowery language about it earlier). You are also given the choice of four classes to try the game with: Sorcerer, Dual Swordsman, Warrior and Temple Knight (Cleric), each with their own class-specific perks, weapons and skills. The class system has seen massive expansion and customisation options, with far more characters to choose from, as well as all-new armour abilities and, what Bandai terms, a “balanced character progression system”.

I played as the Dual Swordsman and Sorcerer, but gravitated more towards the former because I’ve never really been all that inclined towards magic in fantasy RPGs. The game plays totally differently with the two character types, with the fighting mechanics requiring thorough engagement and thought – the swordsman is fast, but swing too many times and you’ll get yourself tired and most-likely massacred, whereas the sorcerer is fantastic at range, but woefully easy to kill in any kind of close combat, even with the shield. The game’s rather famous roll defence seems even more important than ever before, especially with the swordsman, who cannot actually block. Combine this with the more rapidly draining stamina system, and you’ll spend quite a bit of time rolling around just so that you can recharge the stamina and attack your enemies again. You’ll need to be pretty fast on your feet, managing health and combat during  battles, all while dodging between multiple and tough enemies that will ruthlessly kill you without respite. This is where I encountered a big problem, I found the controls inherently clumsy and rather counter-intuitive – I felt I had to button mash just to get the swordsman to do anything, and I would often completely miss my enemies and then tire my character out, only to watch his inevitable slaughter afterwards. This got frustrating very quickly, but I do appreciate the realism and thought that’s gone into the combat system – your enemies (some of them, at least), are equally fallible and clumsy, but by sheer value of numbers will always have an advantage on you.

It’s a great challenge, but it may just leave a bitter taste in your mouth after the latest slaughter session, especially when you have to start right from the beginning of the game again, lest you’ve found a save point. Hopefully the stiffness of the controls will be resolved by the game’s launch, but then again, maybe it just further adds to the overall difficulty of the game.

The save points will once again take on the form of bonfires, which will need to be found and lit in order to create a checkpoint. For any of you that didn’t play the first Dark Souls, the bonfires are pretty rare and often difficult to find, so you’ll need to keep your eyes open as you progress. The demo’s bonfire is found in a ridiculously tough area that’s almost completely dark and littered with big, nasty enemies which need to be killed before you can save. You also need to bear in mind that the game pauses in real-time, meaning that while you’re fiddling with weapons and equipment, you can still be attacked and killed without even realising it. I did mention that the game’s hard, right?

Minor gripes aside though, Dark Souls II is looking to be something truly spectacular, with massively improved animations and sound, impressive bosses like the (as yet) unnamed chariot rider that’s encountered in the demo, as well as wondrous visuals and character designs. Bandai even state that your character will experience various phobias and hallucinations, vastly increasing the immersive nature of the game.

Dark Souls II might not be everyone’s cup of tea, but for fans of the original, or even just fans of the RPG genre looking for a challenge, get ready for a game that’s looking to be pretty genre-defining when it gets its March 2014 release in the US. Most importantly though, get ready to die.

Dark Souls II was previewed on a PS3.

Armed with a mutant healing factor and equal propensity for injury and illness, Ray's foray into superherodom was enthusiastic, but brief. His injuries quickly surpassed his ability to recover from them, and so he decided to pursue the safer and far more viable route of writing about superheroes instead. This new direction actually ended up in Ray getting a Master's Degree in Digital Arts, with specialisation in comic adaptation theory and he's been published in two journals subsequently. Over and above being a total comic geek, Ray also writes and draws his own comic, lectures in Multimedia Design and breaks bones whilst playing squash. 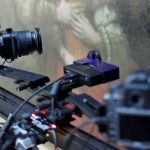