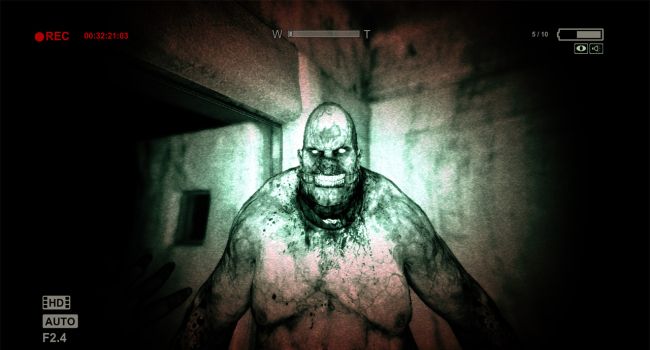 “Outlast contains intense violence, gore, graphic sexual content and strong language. Please enjoy.” These are the first words you are met with when starting Outlast and you’ll be wise not to forget them. Outlast lives up to every single one of them. I wasn’t sure what to expect when I started playing this game, which made the experience all the more shocking. This first-person horror survival game is not for the faint hearted.

The rules in Outlast are simple: “Run, hide or die.” You have no weapons and no powers. You are armed with nothing but a camcorder, a notebook and a few documents. None of these pose any threat to your enemies. You play as Miles Upshur, a journalist, who is known for investigating the unsavoury stories no one else will. You have been tipped off about strange events taking place at Mount Massive Asylum. You decide to go and investigate.

The game starts with you arriving at the gates of Mount Massive Asylum. You check your camcorder and pick up a document titled “Whistleblower”. The document explains how this “whistleblower” was installing software updates at the asylum. Although he signed “all sort of NDA’s” (Non Disclosure Agreements) what he apparently saw there needed to be exposed. I know not many gamers always like to read too much in games and though it is not totally necessary in Outlast, it does add a lot of substance to the experience. After reading the document you get out of the car and you can start to explore. The atmosphere is at once eerie. The graphics look great as the sun sets behind the sinister silhouette of the Mount Massive Asylum. As you approach the building everything seems abandoned. Most of the lights in the building are off and the environment looks neglected. Then suddenly a window lights up and a shadowy figure runs past.

In Outlast the only object you have at your disposal is your camcorder. It has a zoom function so that you can scrutinize the distant spaces and a night-vision mode for the frequently encountered pitch black spots littered through the building. Night vision gives a frightening element to the game. But don’t use it too liberally, as night-vision eats your batteries, something not often found in the abandoned asylum. 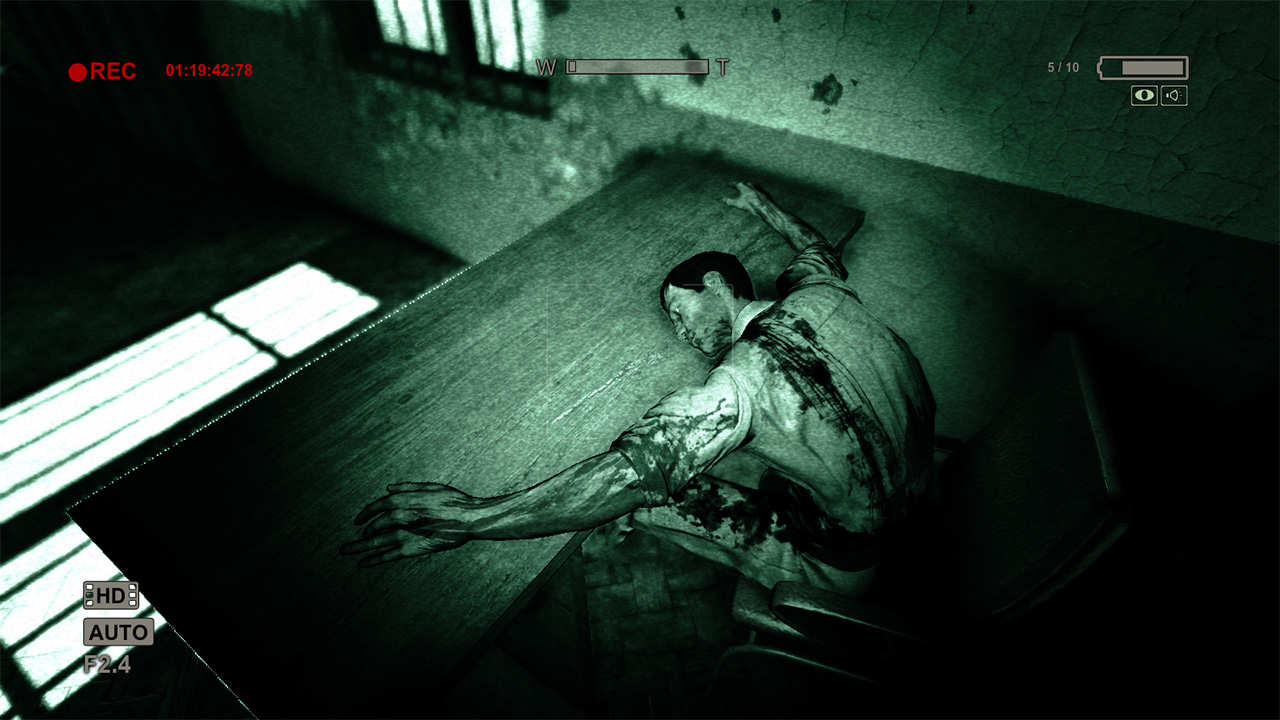 Napping on the job. The nerve of some people. 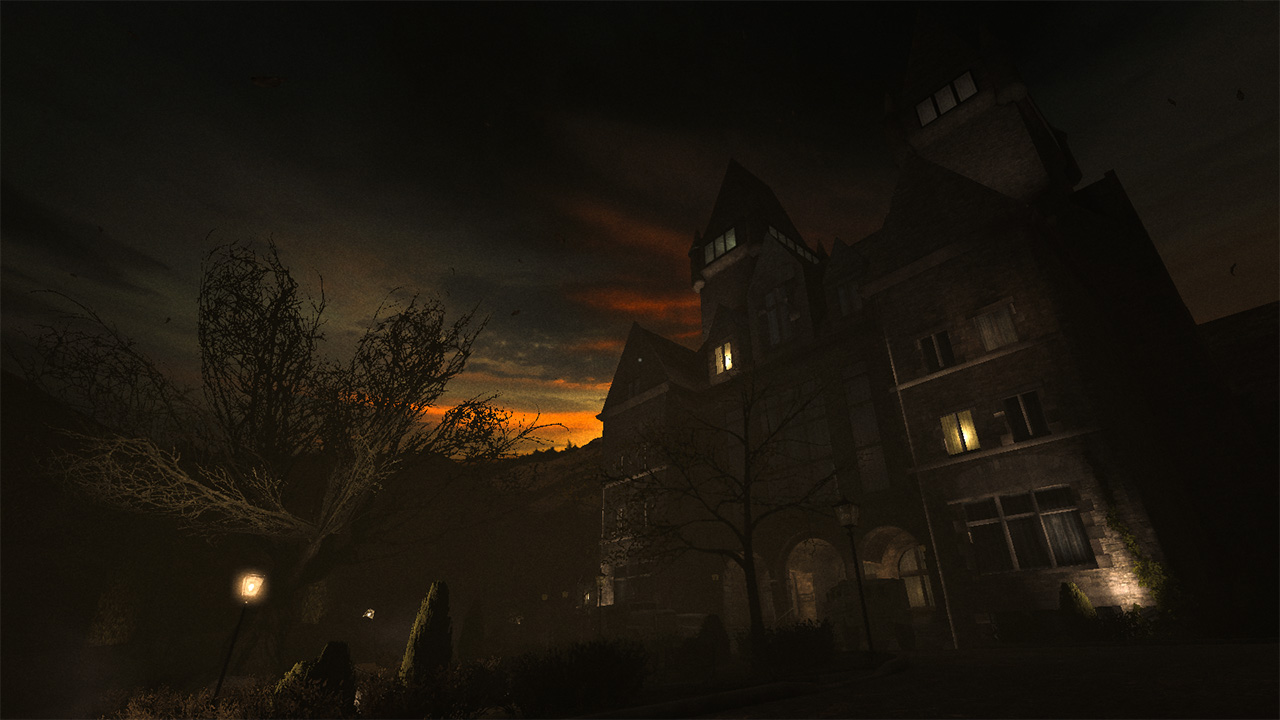 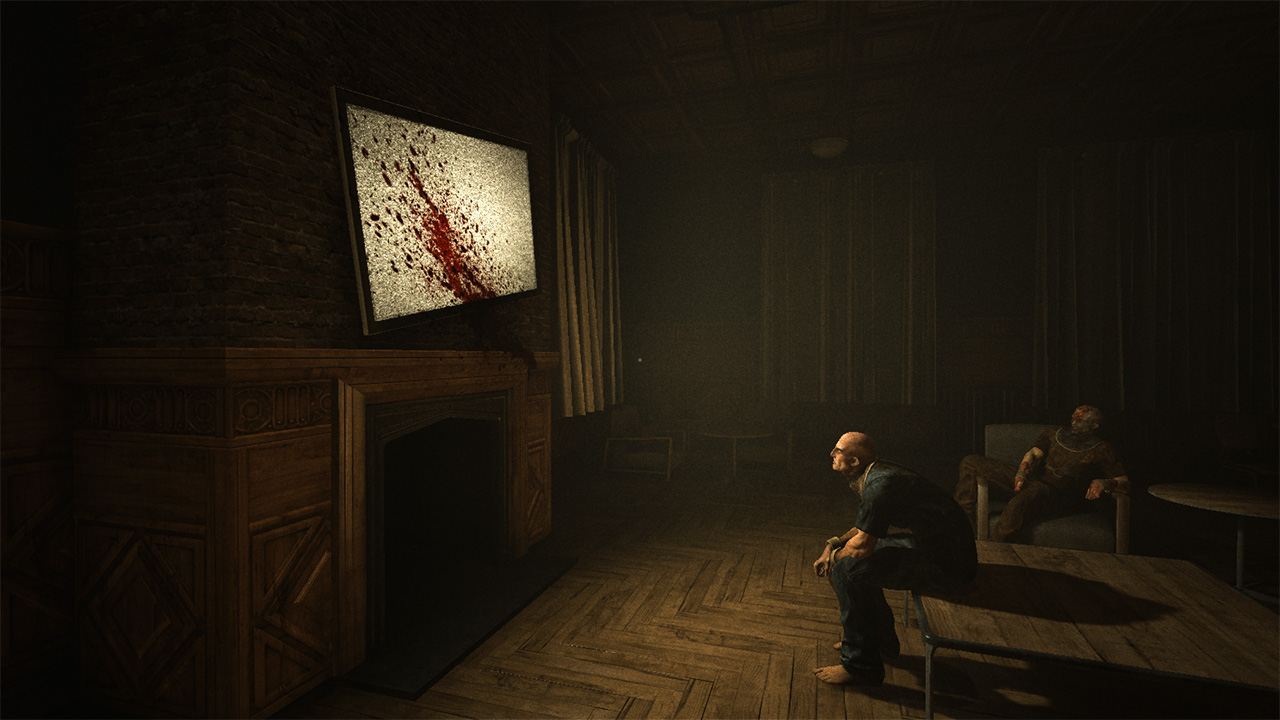 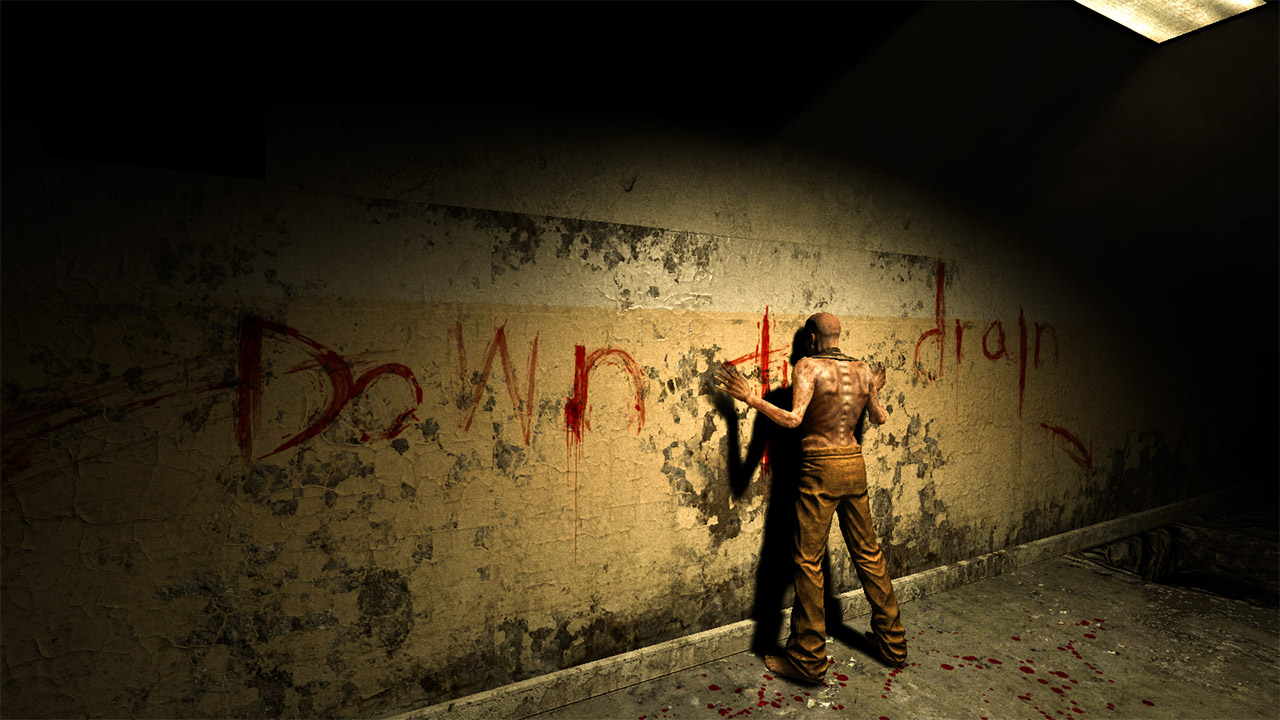 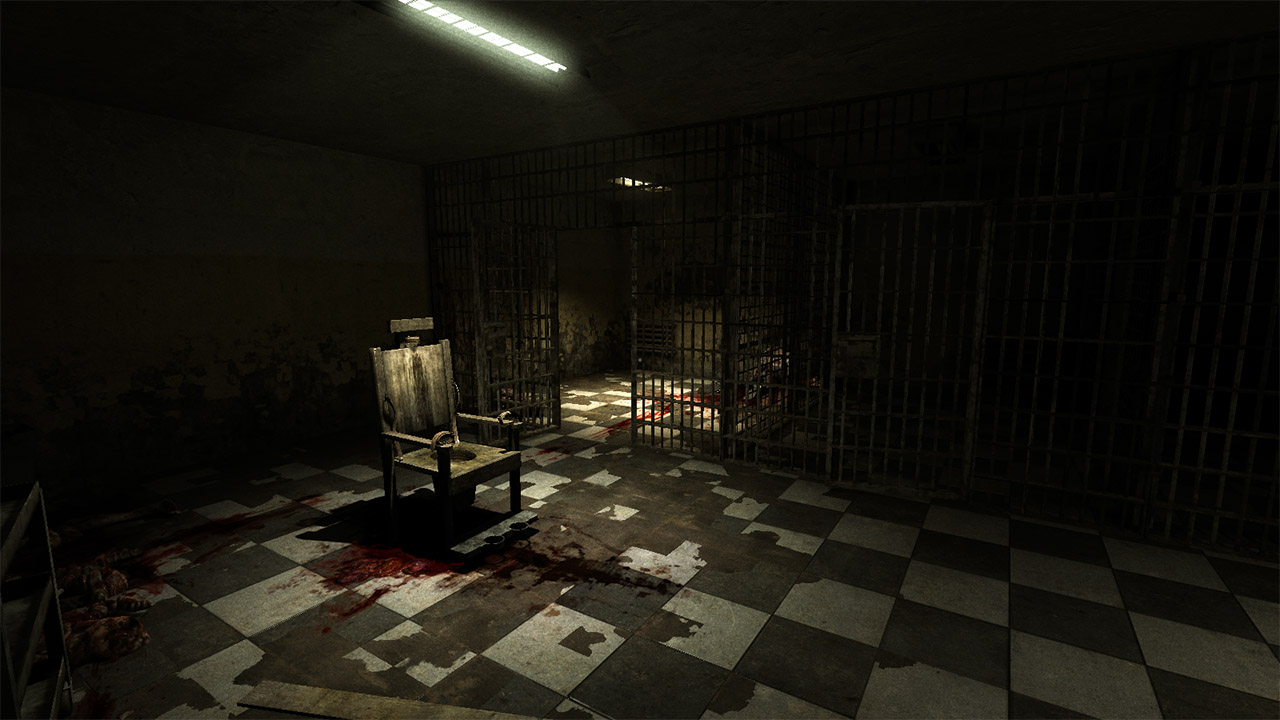 Remember the hospital scenes in Silent Hill? Outlast is that level, but as a game. 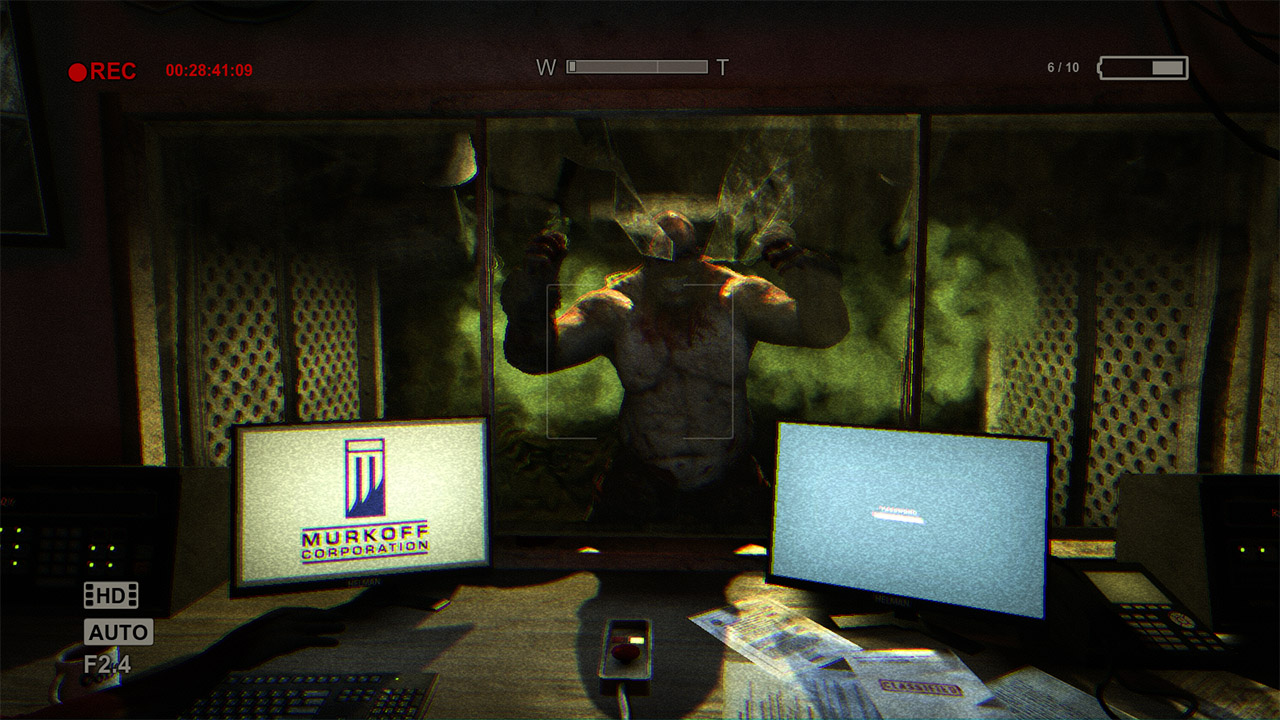 Pretty much how it feels to use Windows Vista. 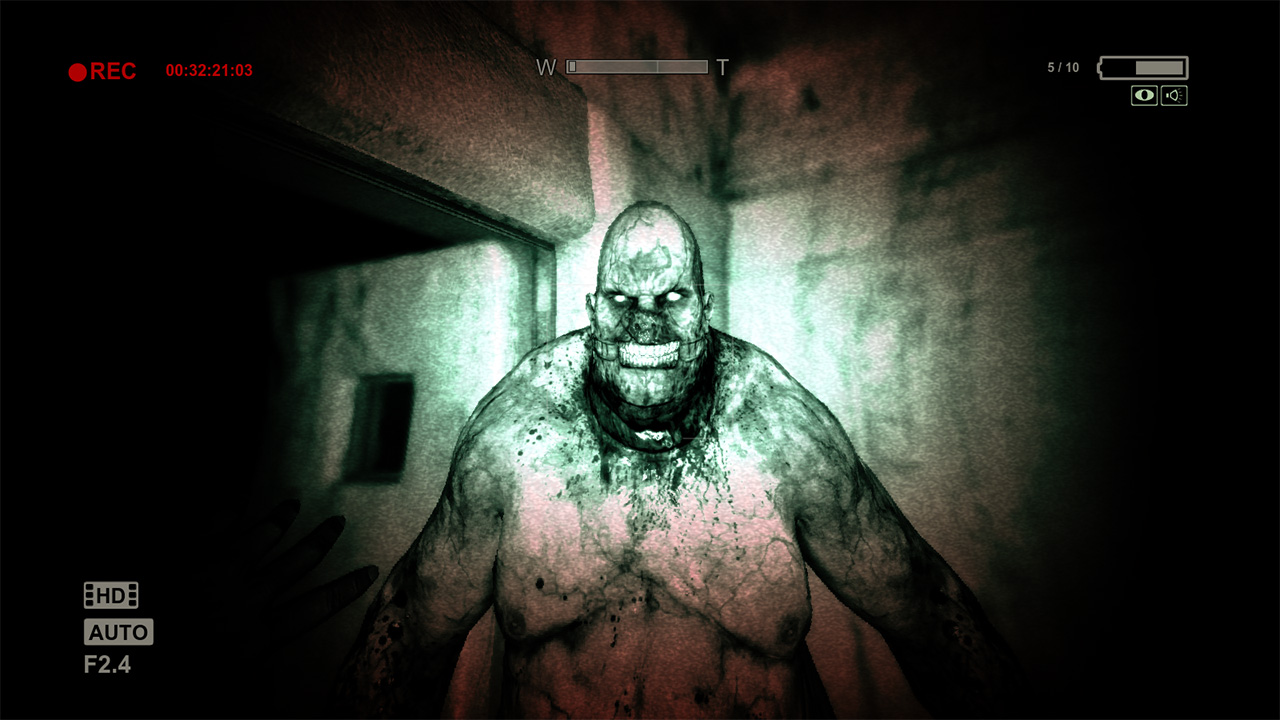 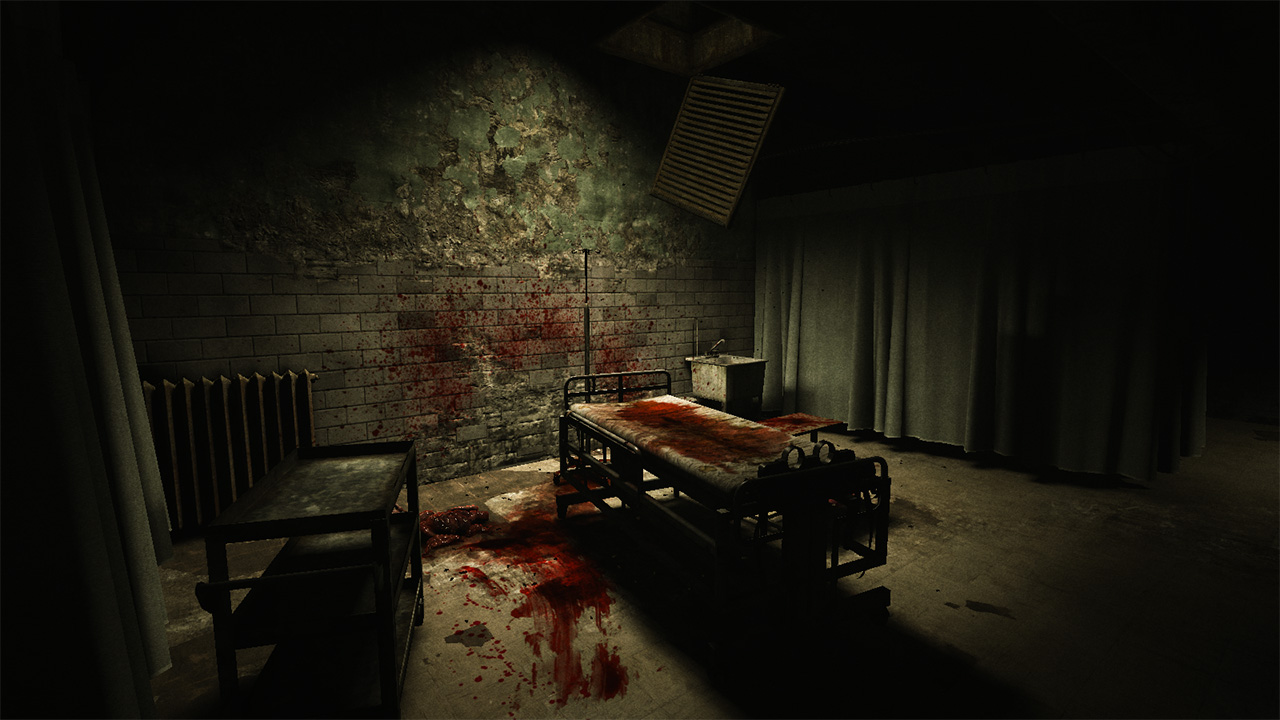 If your PC can handle it, Outlast looks incredible. 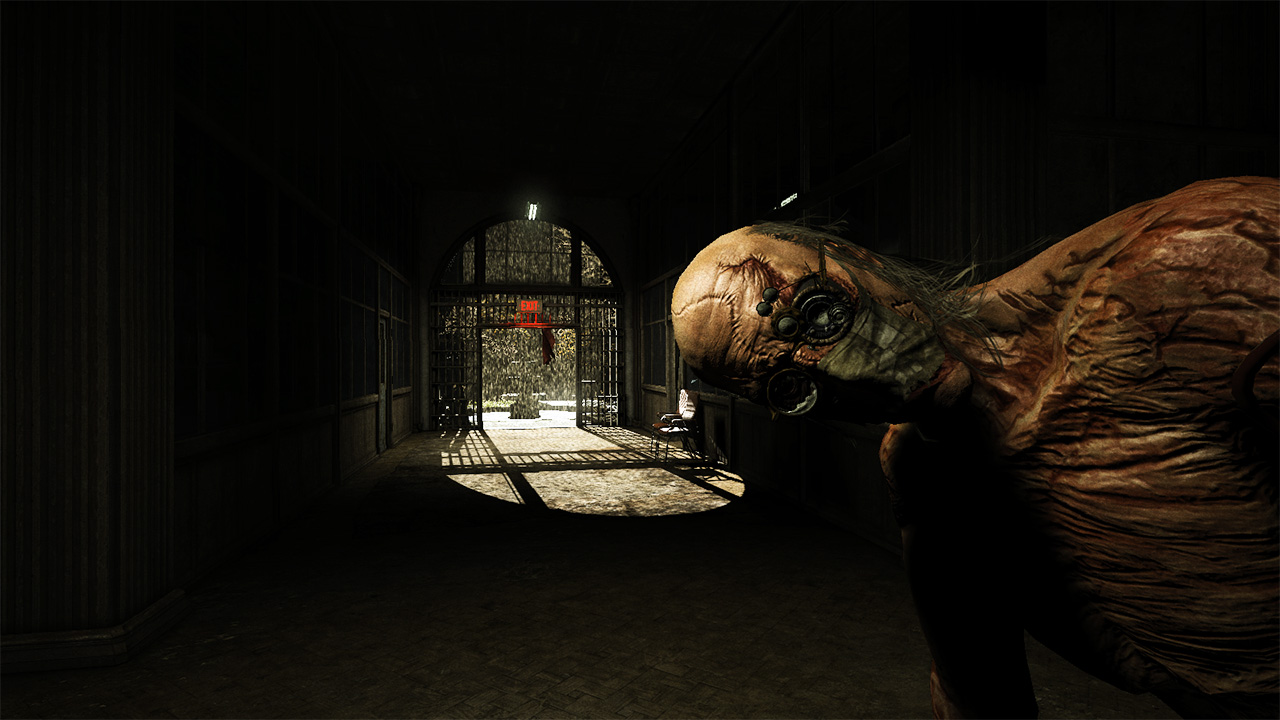 The scares come thick and fast.

If there is one thing Outlast achieves well, it’s the way tension builds up in the story. In the beginning there’s not much happening but that doesn’t mean you aren’t already on edge. Every moment feels like the moment the sh*t is going to start hitting the fan. The dark and ominous music lends an incredibly terrifying atmosphere to the game. And then there’s the creepy sounds emanating from all directions. You can hear someone, or something, running in the other room. Somewhere a phone is beeping off the hook. With each rain drop hitting the window you feel your sanity slowly slipping away. Then you encounter your first pool of blood. When your character is faced with scary moments you actually hear his heart-rate increasing and breathing growing louder, an aspect that makes this game even more realistic and intense. But the initial moment of fear is when you see the first sign of life, and you know you’re not alone. Soon you discover that the asylum has been taken over by the twisted patients, who are all physically and mentally deformed.

The scariest aspect of Outlast is the helplessness of your character. Most of your time will be spent strategically running from cover to cover (lockers, beds, vents) in the presence of the more aggressive patients. A few in particular, including a demented ex-soldier, will be stalking you throughout the game that will lead to some heart-racing moments. Outlast is filled with such moments. Around every corner waits either a brutally bizarre scene or a madman looking to do you harm in ways you can’t even imagine. A quote from your character sums it up perfectly. “Dying just keeps moving lower on the list of worst things that could happen to me here.”

Outlast combines all the right ingredients for a truly terrifying survival game. It’s a horrific conspiracy unfolding in an abandoned asylum run by over-the-edge psychopaths. Top it off with a marvellously menacing music score and you have one of the best horror survival games to date. 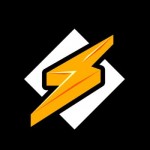