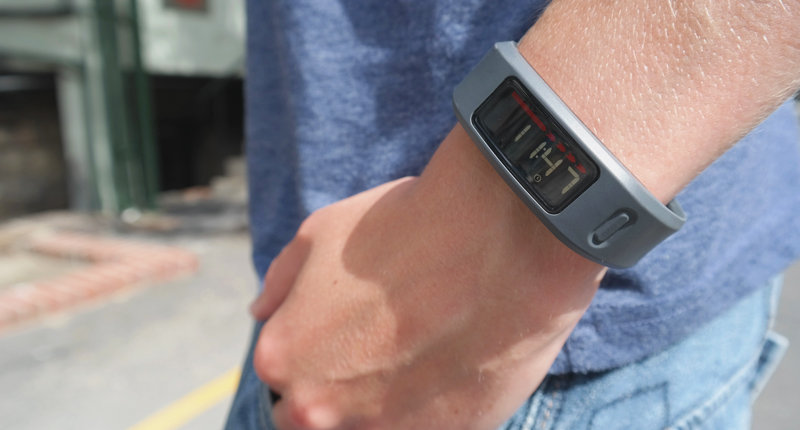 “What’s that?” It’s a question anyone using any piece of wearable tech becomes used to pretty quickly. That makes sense, given how young the market is. Right now, the most likely answer is a fitness tracker. It also makes sense that people ask, given that the current crop of fitness trackers tend to look like props from the set of a futuristic Sci-fi movie. After a couple of weeks with the Garmin Vivofit though, I reckon things are taking a turn toward the subtle.

While my model, which came in grey and black, still elicited a few questions, they were largely from people familiar with other fitness trackers, such as the Fitbit or Jawbone Up. My guess would be that anyone unfamiliar with the category mistook it for a watch with a slightly elongated face. Then again, that’s not an entirely unfair assumption.

The Vivofit does, after all, function as a watch. That’s one thing that sets it apart from most other fitness trackers. That doesn’t mean it’s short on the usual features through. The Vivofit can track your steps, calories burned, sleep, and activities (when paired with a heart-rate monitor). It’ll also tell you if you’ve been sitting for too long, courtesy of an angry red bar that grows if you don’t get up and take a walk for more than an hour.

Another feature that sets the Vivofit apart is Garmin’s claim that its battery will last a year. Unfortunately, I only had the device for a couple of weeks, so I obviously couldn’t test that.

Most of those features are fairly easy to access, but I would advise watching the intro video if you want to get to grips with all of them. I didn’t watch it for a couple of days and assumed that you had to remember when you went to sleep and input the time manually when you synced the device the next day.

A matter of syncing

When it does come time to sync the Vivofit, you’d have to try pretty hard to get it wrong. All you have to do is make sure that the USB Bluetooth dongle is connected to your computer or, if you’ve downloaded the Garmin Connect app, that your phone’s Bluetooth is on and press the Vivofit’s button until it shows that it’s syncing. For the most part, that works fine. I did however have a couple of issues when trying to sync with Garmin Connect on my work desktop.

When I tried to do so while wearing the device, I generally had to hit sync two or three times. If I wanted immediate syncing on the PC, I generally had to stick it on top of the tower, which isn’t really congruent with Garmin’s claim that you can sync the Vivofit from anywhere within a three meter range.

Once you have synced it, you’ll be able to view your data on the Garmin Connect site or mobile app. The interface is very flat, very sleek and pretty informative. You get given information around the number of steps you’ve taken on a day-to-day basis, what percentage of your daily step goal you’ve achieved and how many calories you’ve burned.

If you remember to put the VivoFit into Sleep mode and wake it up in the morning, you can also get a gauge on what kind of sleep you’re getting.

The thing is, that’s all pretty standard stuff for fitness bands and Garmin doesn’t really do anything to set itself apart in any of the above areas. 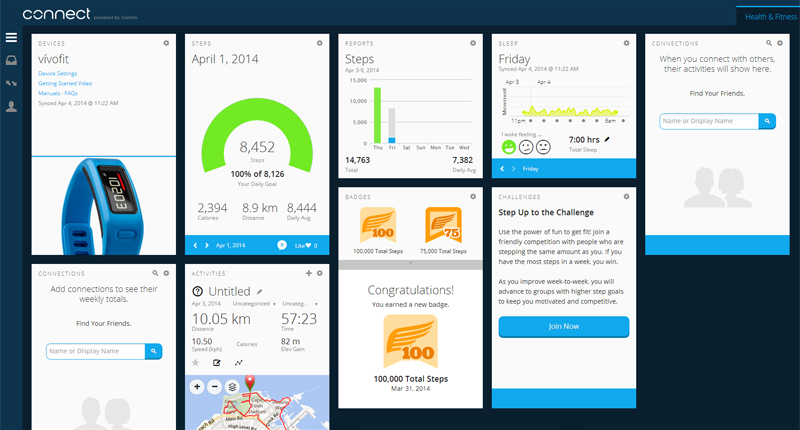 There is one pretty handy option though. If you’re the kind of person who prefers to log specific activities separately — on RunKeeper or MapMyFitness for instance — then you also have the option of importing them in a variety of formats.

I found it especially useful on runs where I was using my GPS watch, largely because it has information, such as minutes per kilometre and average pace, and GPS functionality that the VivoFit just doesn’t have.

It’s also fairly obvious that Garmin’s put some effort into figuring out what you should be doing with that data too. You get given badges for going past a certain step goal and compete against your friends.

You can’t help but feel though that the companies that are building wearable fitness trackers need to think about building software that goes beyond basic gamification and can help anyone who wants to get deeper into the data do so in a friendly manner.

That’s just one of many challenges facing the industry right now though. Research in the US has shown that one-third of the people who buy wearable technology abandon it after six months.

It’s easy to see why too. Beyond taking a certain number of steps everyday and reminding you stand up more frequently, there aren’t really too many specific goals it can help you achieve.

The VivoFit isn’t all that different on that front. It does however have the virtue of working as an actual watch and having a long battery life.

The thing is, it just isn’t enough for people who want to take their fitness to the next level, who want to accurately track their runs, or cycle rides or even hikes. And for that, they can use an app on their smartphone (which they can also listen to music on or use to call for help in sticky situation).

Until wearables can do a good number of those things better than a smartphone running a well-built app, it doesn’t seem likely that they’ll ever be all that sticky.

That said, by adding in a couple of features that aren’t existent in a lot of the products being built by its competitors, Garmin’s certainly made a step in the right direction. 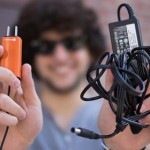