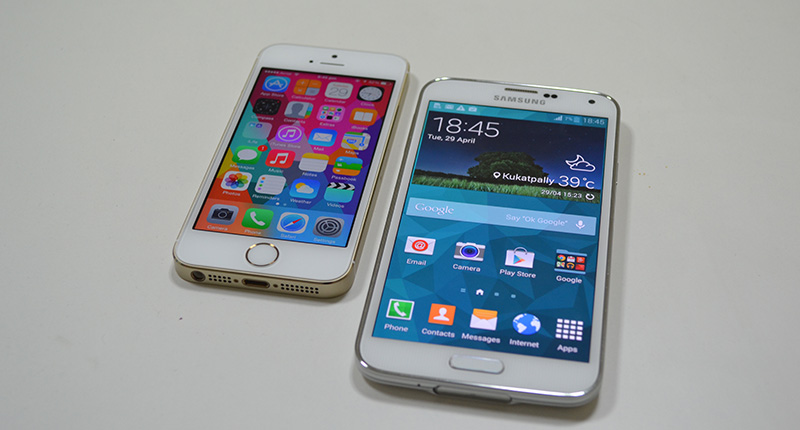 It’s about time we pit some of the best smartphones available in the market against each other. We’ve reviewed the Samsung Galaxy S5 recently and thought it would be great to compare it with the iPhone 5s. Both are flagship offerings in the smartphone space from arch rivals Samsung and Apple. While Samsung focuses on stuffing as much powerful hardware as possible into the lightest body, Apple focuses on premium design with a combination of hardware and software that “just works”. Let’s find out which is a better smartphone if you are a platform neutral person.

Even though it was widely expected that Samsung would release the Galaxy S5 with premium materials and build quality, Samsung didn’t. Instead, it offered a IP67 certified water resistant feature in the Galaxy S5. Samsung has decided to stick with plastic materials for now which are supposed to make the device feel lighter and make it more resistant to damages and dents. On the other hand, the iPhone 5s comes with an aluminium unibody with premium looks and design.

Although it has started to feel like a toy as competing smartphones are growing in size day-by-day, the iPhone 5s is still stuck with a 4-inch screen. Nonetheless, the iPhone 5s feels extremely premium when held. Using it gives you sheer joy. But I think this round is a tie because of the Galaxy S5 and its water resistant body which is less prone to dents. On the other hand, you have the exquisitely designed iPhone 5s although it dents easily and is prone to screen shatters. The Samsung Galaxy S5 has a 5.1-inch full HD Super AMOLED display with 10-point multitouch capacitive touchscreen panel. It comes with a diamond sub-pixel structure which makes it less grainy than the previous versions of Super AMOLED displays. It is protected by Gorilla Glass 3 which is supposed to be even tougher and less prone to smudges. The iPhone 5s has a 4-inch LED-backlit IPS LCD screen with a resolution of 1136×640 pixels and is covered by Gorilla Glass.

The screen on the iPhone 5s is brighter than the one on the Galaxy S5 (at 100% brightness) and the same in terms of outdoor visibility. Although smaller, the screen on the iPhone 5s performs slightly better than the one on the Galaxy S5. Both the screens perform great, be it indoors our outdoors. Both have excellent touchscreen sensitivity and accuracy. But a 4-inch screen doesn’t cut it any more. People like bigger screens because it provides more real estate for things like multimedia playback or web browsing. I personally experienced problems in typing using the on-screen keyboard in the iPhone 5s due to comparatively smaller screen.

When it comes to the actual image quality, the Samsung Galaxy S5 comes out on top due to a slightly larger sensor, phase detection autofocus lens and the new ISOCELL technology. ISOCELL sensors have increased width between pixels on the sensor so that noise doesn’t leak from one pixel to another, thus reducing the noise in the images. Theoretically, this should greatly improve low-light performance of the camera and it reflects in the real-life performance. On the other hand, the images shot with iPhone 5s can be slightly softer near the edges but this problem is not found in images shot with Galaxy S5. The white balance as well as colour tones are better in the iPhone 5s. The Galaxy S5 can record 2160p 4K videos at 30 FPS while the iPhone 5s records 1080p full HD videos at 30 FPS. Videos shot using the Galaxy S5 come out comparatively clearer and smoother. Both these smartphones can record 720p videos at 120 FPS for cinematic slow motion effects. The iPhone 5s has selective slow motion where you can select a part of video which you want to be played back in slow motion. Such option is not present in Galaxy S5, limiting the practical use of that mode. Galaxy S5 though, offers a lot of other options in the camera UI. But practically, these modes will be rarely used.

Samsung has used a newer version of its own Exynos SoC. It is equipped with an Exynos Octa 5422 which consists of four ARM Cortex A15 CPU cores in combination with four ARM Cortex A7 CPUs. The Mali-T628 MP6 GPU performs all the graphics related tasks such as multimedia, imaging and gaming. There is also 2GB RAM along with 16GB internal memory and a microSD card slot for extra storage (up to 128GB). The iPhone 5s runs the A7 SoC with 1.3 GHz dual-core cyclone CPU and quad-core PowerVR G6430 GPU. There is 1GB RAM and up to 64 GB internal memory. It might be just a dual-core CPU on paper but it is based upon newer ARM v8 ISA as opposed to the Exynos 5422 SoC used in the Galaxy S5 which is built upon ARM v7 ISA. This new CPU architecture doubles the number of registers and has four times the cache compared to A6 SoC which was used in the iPhone 5.

I’ve tested them with GeekBench (CPU performance), GFXBench 3.0 (GPU performance) and SunSpider (web browsing performance). Based on benchmarks, iPhone 5s is faster, both in CPU and GPU performance. Looks like PowerVR’s new Rogue GPU is slightly more powerful than ARM’s own Mali GPU. In real-world usage, I noticed some slowdowns in Galaxy S5, especially when hitting the home button after processing intensive task such as web browsing or heavy gaming. There were no such slowdowns with the iPhone 5s in similar scenarios.

Both the smartphones have fingerprint scanners and are one of the few smartphones available in the market with that feature. The iPhone 5s allows adding up to 5 fingers while the Samsung Galaxy S5 is limited to 3 fingers. In terms of usage other than unlocking the devices, the Galaxy S5 can use it with a Samsung or PayPal account. There is no support for purchase from Google Play Stores though. The iPhone 5s can use the fingerprint to confirm downloads/purchases from the App Store, iTunes, iBooks, NewStand, etc. I experienced at least 20-25% finger print recognition failures with Galaxy S5 while it was as low as 5-10% on the iPhone 5s. The iPhone 5s is simply superior in terms of setup, usage simplicity as well as accuracy of finger print recognition. The fingerprint sensor used on the Galaxy S5 required you to swipe your registered finger to unlock the device. Whereas the one on the iPhone 5s needs you to only place your registered finger on the home button. The swipe should be completely straight, otherwise there are high chances that it won’t recognise it.

The Galaxy S5 comes pre-loaded with Android 4.4.2 KitKat with a newer version of the maligned TouchWiz UX and its flatter design. The iPhone 5s comes with iOS 7.1.1 with colourful and flatter UI when compared to iOS 6. iOS also comes with Control Centre which includes quick setting toggles and other controls. Although, I would not try to compare iOS with Android here, I can simply say that Galaxy S5 comes with far more software features and options compared to the iPhone 5s. For those who won’t like to use these features, the Galaxy S5 might appear bloated to them. But the iPhone 5s is generally more consistent in software performance.

The Exynos version of Galaxy S5 lacks 4G LTE connectivity but comes with loads of other connectivity options such as dual-band Wi-Fi ac/b/g/n, Bluetooth 4.0 (LE), Wi-Fi Direct, NFC, IR Blaster, microUSB 3.0, MHL 2.1, USB OTG and USB Host. The iPhone 5s comes with worldwide 4G LTE support but lacks gigabit Wi-Fi ac. Instead, it ships with dual-band Wi-Fi b/g/n, Bluetooth 4.0, AirDrop, AirPlay and Lightning Port. It lacks NFC, Wi-Fi Direct and IR Blaster. The Galaxy S5 has open standards when compared to the closed standards (lightning port, AirDrop, AirPlay) in the iPhone 5s. You can connect flash storage drives, keyboards, mice and even game controllers to the Galaxy S5 if you want to. The Galaxy S5 packs in a whole bunch of sensors such as barometer, temperature sensor, pedometer, heart rate monitor, RGB sensor and gesture sensor. I did not find the readings from the heart rate sensor and pedometer to be accurate. You would be better off with dedicated fitness trackers like Fitbit Force or Nike Fuelband. The iPhone 5s has just a pedometer apart from regular sensors like accelerometer, gyro, ambient light sensor and digital compass.

Nutshell: iPhone 5S wins due to its consistency.

There is not much of a difference between their prices. The Apple iPhone 5s is priced from US$199 (contract) up to US$849 while the Samsung Galaxy S5 is priced at US$699. I feel that the iPhone 5s wins due to its consistency, especially with the way Apple seamlessly implemented a fingerprint sensor. Don’t get me wrong, this is the comparison of Exynos version of Galaxy S5 and not the Snapdragon version. If you are out in the market to buy a high-end smartphone, you would want your device to look and feel premium, apart from expecting fast performance and it being future proof. The Galaxy S5 still doesn’t feel premium, even though it’s excessively feature packed. 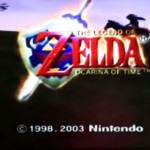