Amazon is releasing an awesome new device. According to the guinea pigs shown in a teaser video released last week, it’s also “super awesome,” “amazing” and “very real life”. Recent leaks suggest that the device has been built in a not-so-secret-anymore lab called Lab126 among other gadgets such as a “remarkably thin” Kindle Paperwhite e-reader and a Square-like credit-card reader.

Bloomberg Businessweek have opened a can of worms when it started picking up the scent of Amazon’s alleged secret R&D lab. Named after owls, Lab126 have been working on Tytus and Otus which are two smartphones that have been in development since 2009, claims Bloomberg. They are special in that they both have a 3D feature — the one you require glasses, the other you don’t.

The tech company has had its fingers in many innovation pies over the last few years. Apart from the grand leaps it has made to the online shopping industry with its state of the art recommendation algorithm, the company has released e-readers, tablets, and more recently the Fire TV set-top box.

There’s also the not-so-popular Amazon Dash — a device that’s been soft launched recently and lets you add items to your online shopping list by scanning barcodes.

The only thing that’s really missing from that list is a smartphone. But not just any smartphone. Sources suggest that Amazon’s 3D phone is fitted with a bunch of infrared cameras.

By relying on motion sensors, a total number of four cameras on the front will apparently allow the device to track the user. This was first inspired by the Wii which could be hacked to track a person’s head movement.

If the video is anything to go by (it is the only official tease we’ve got after all), then the gestures won’t only refer to subtle things like swiping your hand to answer a call. Since the one person in the video above says that it’s very lifelike, we can only imagine the device being able to create virtual replicas of the person wielding it.

In terms of specs, BGR has reported that the smartphone will have a 4.7″, 720p display, a Qualcomm Snapdragon processor, and 2GB of RAM. 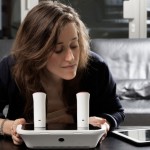