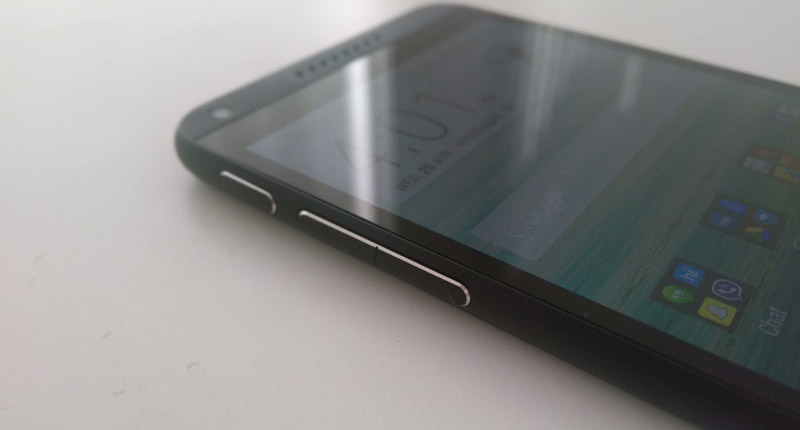 HTC’s focus on its high-end One line-up of smartphones didn’t work out very well. Now, the embattled Taiwanese phone maker is renewing its focus on mid-range smartphones in the hope of increasing the cash flow and keeping the cash cow running as long as it can. To counteract this, HTC’s revealed a new range of mid-range Android smartphones, including the Desire 210, Desire 310 and Desire 816.

The Desire 816 looked like the most attractive option of the bunch, especially when I compared it to some other options in its price range. Its closest competitors are the Samsung Galaxy Grand 2 and Sony Xperia T2 Ultra. All of them are priced close to each other and are equipped with large HD screens, Snapdragon 400 processors and dual SIM card slots. I picked it up and used it for more than two weeks. Here are my personal impressions about the Desire 816.

Thanks to its large screen, the Desire 816 is quite a tall (156.6mm) device. Even though its shell is made up of different kinds of plastic, it has the right amount of heft (165 grams) to it. The major portion of its face is covered by the screen. Stereo speakers, front-facing camera, notifications via an LED light and a couple of sensors are also present on the front. Thankfully, HTC has finally understood the importance of ease of use where button placements are concerned. The power/lock button and the volume rockers are present on the left side. The headphone jack is on the top while the microUSB port is on the bottom. The dual SIM card and microSD card slot on the right are protected by a long plastic flap. The whole device, like every other phablet, is uncomfortable to hold and operate. But I guess we’ve adjusted to this compromise for the sake of larger screens. No one can deny their love of large colourful touch screens. Apparently, even Apple couldn’t stop itself from using large screens in its upcoming smartphone.

The front and sides of the Desire 816 are made of soft-touch plastic. The smartphone is available in a bunch of attractive colour options. Also, as HTC, it is customary to fail in some aspect, be it the hardware or the software. HTC decided to use a glossy plastic back which demands attention from fingerprints and scratches. The back got scratched within a week of my usage. The camera lens gets smudged easily.

The 5.5″ Super LCD2 screen boasts an HD resolution resulting in a pixel density of 267ppi. I thought the display wouldn’t be sharp and I would miss the retina display-like sharpness (as popularised by Apple). But in real life, the screen was a joy to use. It has excellent viewing angles, deep blacks and good contrast. The screen could’ve been a bit brighter though. To add to this concern, the automatic brightness tends to set the screen a tad lower than it is supposed to. The glass panel on top of the screen isn’t very reflective and when set at maximum brightness, the screen is usable in direct sunlight. The quality of audio through its front-facing stereo speakers is excellent. HTC says that its used the same BoomSound stereo speakers which were used in the original HTC One (M7). But they aren’t as loud as the ones used in the HTC One. Audio quality through headphones is spot on. It is loud and clear with no distortions whatsoever. Listening to music through headphones was an enjoyable experience. Unlike its One lineup of flagship smartphones, where it keeps on experimenting, HTC has used a conventional 13MP BSI camera sensor with 28mm autofocus lens (f/2.2 aperture) in the Desire 816. It uses a 4:3 sensor and is accompanied by a single LED flash. The 5MP wide-angle, front-facing camera is helpful for glorious selfies. The camera app UI is one of the best in the industry. Swiping across the screen helps to switch between the rear and front cameras. Volume buttons can be used to capture the image/video or zoom.

There are a bunch of image capture modes such as HDR, Panorama, Night, image stabilisation, portrait, landscape, backlit portrait, text and macro). ISO, exposure and white balance can be set manually from the settings menu. In the “selfie” mode, clicking the shutter button starts an auto timer. This gives users some time to adjust themselves before the image is shot. I found this particularly useful.

There’s a “make-up” setting that allows users to set how good looking they want to appear in the images. Camera settings can be saved so that users don’t have to adjust anything when the camera app is restarted. The image quality is better than any other device that HTC has released to date. For the first time ever, I felt that HTC had put some thoughts in image post-processing. There is plenty of detail and the colours come out very well. The white balance is a bit warm but I like it that way (and most people do). There is less noise and blotchiness in the images shot by Desire 816’s rear camera. The HDR mode did better than even the Galaxy S5 — that’s a big surprise for me. The panorama mode comes with horizon level which helps in clicking straighter images.

Both the front and rear cameras can record full HD 1080p videos. The rear camera can also record 720p videos at 60fps. There’s also a slow-motion video mode that records videos at 60fps and plays them back at 30fps, thereby resulting in cinematic slow-motion effect. Audio is recorded in stereo at 192kbps. The video quality is very good, falling short of the One M8 by a hairs margin. The HTC One M8 would have been a much better device had HTC used the 13MP camera sensor in it. Although the Desire 816 lacks UFocus (background defocus) and Zoe modes due to lack of ImageChip. I never used the Zoe mode anyway.

Excellent performance for a mid-range smartphone

Qualcomm’s Snapdragon 400 CPU is being used in most mid-range smartphones. It uses a quad-core Cortex A7 CPU and Adreno 305 GPU. HTC has used a higher clocked MSM8928 SoC (1.6GHz) along with 1.5GB RAM. There is 8GB storage and a microSD card slot for more storage. In real life usage, the device proved to be very smooth. The device felt faster than both Xperia T2 and Galaxy Grand 2. The UI was buttery smooth. Multitasking was satisfactory and processing heavy tasks like web browsing and gaming wasn’t an issue. Don’t expect a great gaming experience as most of the heavy games were middling when it came to performance

Running on top of Android 4.4 KitKat, the HTC Sense 6.0 UI is one of the most beautiful skins that I’ve yet seen. Also, BlinkFeed news reader can now be turned off. It features on-screen buttons and the app launcher has vertical scrolling. It also provides a sort option for apps, which can be hidden. Quick setting toggles under the notifications bar are completely customisable. A maximum of 12 (from a total of 23) toggles are visible. The layout of the settings menu is one of the simplest ones that I’ve seen of late. Users can import data from other phones including iPhones, Blackberry or Windows Phone. With a decently large 2600mAh battery, the HTC Desire 816 lasted a complete day or slightly less than that. Most of my usage consisted of web browsing, reading news, music playback and clicking images.

Verdict: It has a good display, attractive design, excellent camera, dual SIM connectivity and performs daily tasks very well. Priced at around US$389, the Desire 816 steals the show from its competitors, namely the Sony Xperia T2 Ultra and Samsung Galaxy Grand 2. The HTC Desire 816 is one of those mid-range phablets in the market which I can recommend to anyone.