Apple was a company on the brink of financial destruction 15 years ago. After being bullied by Microsoft with the emergence of the PC and prior to Steve Jobs’ messianic return, Cupertino’s sweetheart had suffered a 30% slump in sales in the final quarter of 1996, with two further years of red financials. Jobs’ influence cannot be underestimated, but can be understood by the firm’s massive growth from twig in the sand to the post-1997 innovative powerhouse that it is today.

His awareness of emerging public trends was mainly to thank, with products building on and bettering others previously released. The iPod, for example, took the Sony Walkman’s philosophy and adapted it to the emergence of the digital audio era, a concept that was prematurely impossible to grasp prior to 2006. It was the quintessential audio player, but that was many moons ago, and the Jobs era is over.

But what if Jobs was still at the helm of technology’s biggest ship? What would Steve Jobs’ smartwatch be?

Firstly, would Jobs have wanted an iWatch?

I believe so. The wrist is an ideal area of the body to harbour technology, and lends itself as the gateway to all wearable technology. While Google Glass is risque, intrusive and garish, a wristwatch (or wristband for that matter) is subtle, sleek and largely unobtrusive. And in the Jobsian world, an iWatch would be the string that ties all OSX and iOS devices together, in a neat little bow.

But while its rivals, including Samsung’s Tizen-based Gear range, LG, Sony, Microsoft and Motorola, are readying or have already released devices of their own, has Apple waited too late to release its own device? Looking backwards to connect the dots

For one, Jobs was never afraid to delay the launch of any hardware item. Perfection took time, and while other manufacturers rushed to release devices ahead of their full development cycle, Apple has been a company to wait until the opportune moment presents itself. The iPod springs to mind again.

Secondly, the smartwatch remains an immature technology with an ever-growing identity crisis. Although Android Wear — Google’s ultramobile OS — dominates the landscape, dominating is not exactly winning if there’s no adequate competition, or if there is room to improve. And as the smartwatch becomes a ubiquitous piece of hardware, trying to find itself in the cyclone of social relevance, issues and opportunities present themselves.

As a latecomer to the market, Apple can spend more time getting things right first time, rather than rectify things post-release. Just as Jobs once noted: “Details matter, it’s worth waiting to get it right.”

Details, style, minimilism, simplicity, design — these were five of the most important words in Jobs’ vocabulary. Tim Cook’s company has been busy with ambitious staff acquisitions from Yves St. Laurent and Tag Heuer, and hint at the path Apple is likely to take with the smartwatch. Technical hirings also include biometric and sensory experts from the world of medicine, suggesting that the iWatch won’t just be a pretty face.

But wrist-worns will likely be sold on the basis of aesthetics more than any other piece of tech previously created. Sure, smartphones for one have grown in style since the inception of the iPhone and Nokia’s N range, but it’s largely still a case of function over fashion. While Jobs’ would’ve wanted the iWatch to be a looker, he’d argue that form and fuction are one of the same — two entities that feed off one another.

Design filters down into hardware, with analysts claiming that a plethora of sensors will be backed by wireless charging and a full verison of iOS to provide the watch face with even more functionality, trumping current Android Wear and Samsung Tizen offerings. Being a fashion item as well, a host of strap options will likely be included. Essentially, it won’t be an easy device to ignore, which frankly can be said of every Jobsian product created. Being the yardstick of quality

And as for quality — products launched during Jobs’ reign were known for it, albeit at outrageous prices. Sapphire Glass (if demands can be met) will ensure a virtually unbreakable watch face, allowing for possible extreme sports uses. The iWatch promises to meld everything that’s good about Apple’s products into a flattened matchbox-like form factor.

In an interview with Playboy in 1985, Jobs describes his ideal creation (the Mac):

“We think the Mac will sell zillions, but we didn’t build the Mac for anybody else. We built it for ourselves. We were the group of people who were going to judge whether it was great or not. We weren’t going to go out and do market research. We just wanted to build the best thing we could build.”

“Every once in a while, a revolutionary product comes along that changes everything”

But it’s not another Mac and nothing could quite be as revolutionary as Jobs’ first creation. The smartwatch may not be Apple’s next greatest conception either (or the world’s), nor may it be the company’s crowning jewel, but the smartwatch for now at least, is the technology that will spurn the highest guaranteed revenues. Sales are estimated to balloon by 2018 to 91.6 million, and 373 million by 2020. Not the Jobs’ way — profits uber alles — but something that leaves all tech company executives awake at night. Interestingly, while Jobs’ was steering the ship, profits practically sorted themselves while the products came first. It’s impossible to recall a moment when Jobs was worried about profits.

But will Apple’s smartwatch change the world? Probably not. Will it change smartwatches and wearables as we currently understand them? It’s highly likely. But whether the product will be as successful, refined and revolutionary as Jobs’ would’ve envisioned remains to be seen. Unfortunately for the world, we’ll never get to see the Jobsian smartwatch, and that is a crying shame. 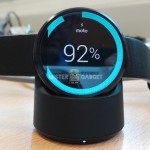