The PC gaming fraternity waited a while for this announcement but finally, at its E3 2015 presser AMD announced its new breed of Fiji GPU based graphics cards — the R9 Fury and the R9 Fury X.

There’s no real difference specs-wise between these two cards except that the Fury X is watercooled while the Fury uses good ol’ air. You must wonder if watercooling the card allows users to push the GPU to its limit or if this was a “must do” for AMD with its history of cooling troubles.

Nevertheless, both cards boast some seriously juicy specs, including the new HBM memory architecture which allegedly allows for a three times boost in bandwidth. Compared to the GTX 980 Ti‘s GDDR5 bandwidth of 336.5GB/s, the Fury X boasts 512GB/s, but it does only feature 4GB of the stuff. The Ti in comparison packs 2GB more.

Nevertheless, there’s also 4096 stream processors at hand, 128 raster operation units and 256 texture mapping units. All this results in a total computing power figure of 8.6 TFlops, which is nothing to be ashamed about at all.

What’s more interesting though is this things price. At US$549 for the air-cooled Fury version, it’s ridiculously cheap considering that it can game in 4K at ultra settings, or so believes AMD. For watercooling, you’ll be dropping another US$100 onto that figure, but it does come with the added joy of possible card overclocking.

These two cards weren’t the only Fiji GPU-based units unveiled though.

There’s a new R9 Nano which at 6.0-inches is one of the smaller AMD cards we’ve seen. It’s perfect for 4K media center PCs and Steam Machines we imagine and boasts half the power of the R9 290X (based on the Hawaii architecture). Hell, does it really matter though? It’s adorable.

The astounding thing for AMD is its TDP. At 175W it’s probably one of the company’s coolest cards and it’s powered by a single 8-Pin power connector, which is a welcome thing for anyone building in an ITX for mATX chassis.

The R9 Fury will be available on 14 July while the R9 Fury X is coming on 24 June and will start at US$549, while the R9 Nano will begin shipping a little later this year. 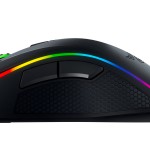