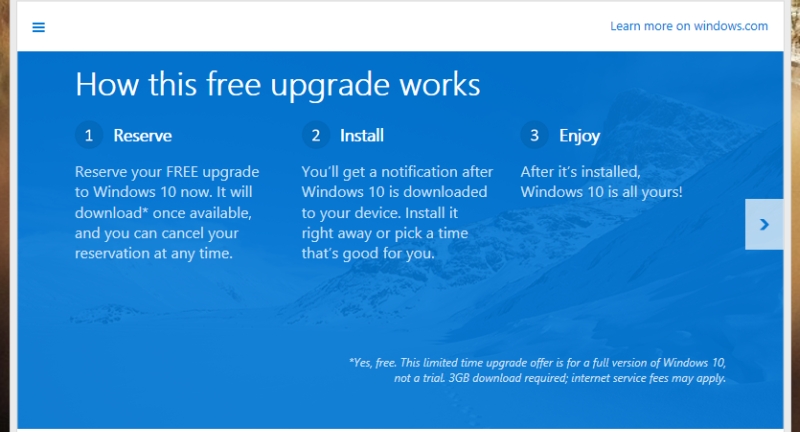 Update: Windows 10 will be launched officially on 29 July, according to Microsoft’s Terry Myerson on the Windows Blog. The post reads:

On July 29, you can get Windows 10 for PCs and tablets by taking advantage of the free upgrade offer, or on a new Windows 10 PC from your favorite retailer. If you purchase a new Windows 8.1 device between now and then, the Windows 10 upgrade will be available to you and many retail stores will upgrade your new device for you.

Remember back in January when Microsoft announced Windows 10‘s free upgrade deal for those running Windows 7 and 8.x? Well, the Redmond company is now urging you to “reserve” your upgrade before the OS arrives in earnest.

Spotted by a eagle-eyed Reddit user, p4block, those running on these OSes will spot a “Get Windows 10” dialog asking users to reserve their upgrade before the day arrives. VentureBeat reports that it seems to be update KB3035583 that’s causing the notification, and if you don’t fancy the spam, simply removing this update will clear the annoyance.

Of course, this does give good insight into exactly how the update process will work.

“Reserving” your Windows 10 download will allow those to “download once available,” but users will need 3GB in reserve. Once it’s downloaded, users will receive a notification but can choose when to install it.

It sounds very much like the usual, seamless Windows Update process and shouldn’t cause too much grief based on what we’ve experienced with the Windows 10 Technical Preview update process.

This is perhaps not the nicest way to notify users of Windows 10’s availability. It looks a lot like a browser popup, and the diction definitely conveys the same tone. It is good to see that Microsoft is sticking to its free upgrade for a year policy outlines in January.

Although we still don’t have a set-in-stone release date, Newegg has this weekend leaked prices of the OS, which will range from around US$109 to US$149. It’s more or less in the same range as Windows 8, so that’s a good thing especially for those still using Windows XP (or, god forbid, Vista).