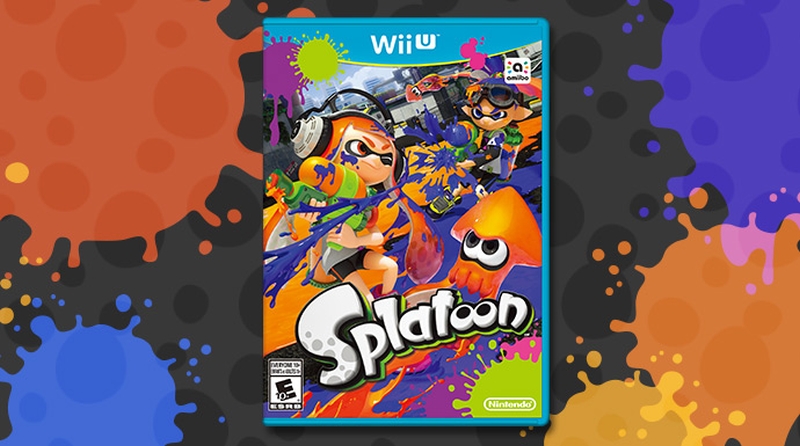 There are two things you wouldn’t normally associate with Nintendo: new IPs not featuring that mustachioed Italian plumber, and angry shooters. Without so much as a warning toot at E3 2014, the company announced Splatoon, a game that is the strangest embodiment of both. Needless to say, people were fairly excited.

And they had every right to be.

While serious shooters like Halo, Call of Duty and the endless number of Tom Clancy inspired titles rule the blue and green consoles, Splatoon does things quite differently over on the Wii U. It’s not as serious as other shooters we’ve seen. Hell, we’re not sure if we can actually call this a shooter, because it really is a new take on a stale genre. It’s a massively bold move too, especially for a company so stuck in the past.

So far though, it seems that Nintendo’s bravery has paid off. 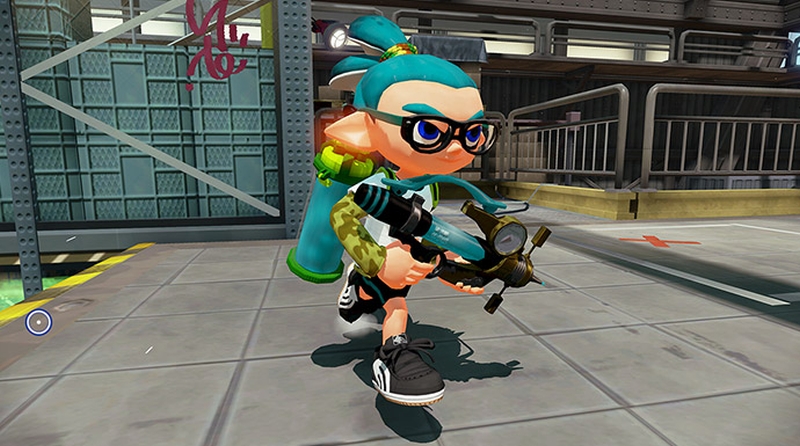 Splatoon had a strong debut selling over 140 000 copies in its first week post homeland launch, and just topped one million sales worldwide a few days ago. But is this success based purely on hype, or does Splatoon boast more than just a fresh lick of paint?

The worlds are deep an contrasting thanks to the nifty paint mechanic which the company coats thickly across the entire title, all the way down to the puns. The story however is thin but intriguing too — something that we often don’t see from Nintendo IPs.

You play as a squid-like humanoid creature known as an Inkling who has the ability to morph between these two states at will. In humanoid form, players can ink their way through worlds using guns, paint rollers and bombs (initially), while in squid-mode, players can swim through their respective colours of ink, replenishing their ammo while they’re at it. In short, the idea — at least in its purest form — is make the biggest mess you possibly can using your colour ink.

The primary takeaway? Your graffiti is good graffiti. 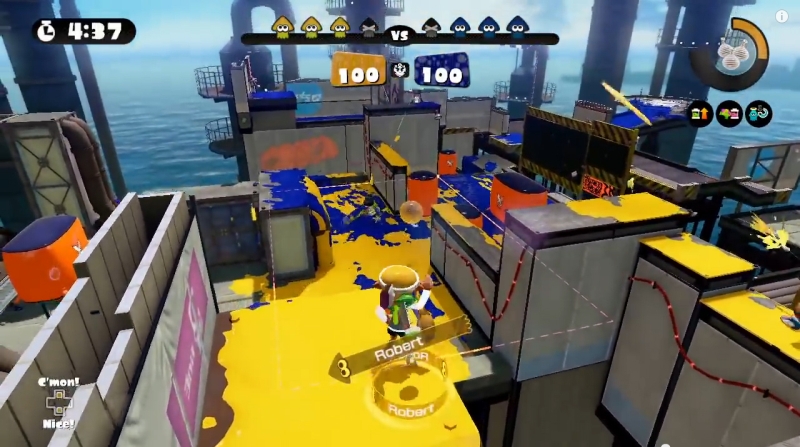 The game boasts three distinct player modes too. The most important, and the real money maker, is the four versus four online multiplayer option, which lets eight Inklings battle it out to out-paint the opposing team in a makeshift map. It’s definitely the most fun I’ve had playing an online game in quite some time, even for a gamer who has just entered the lobby at level notgoodenough, and even more pertinent for someone who hates online gaming.

And this is the real important deviation Splatoon carries above traditional shooters: there are ways to win for all levels that don’t necessary involve weapons. To win in a 4V4, players only need out-paint the opposing team before time is called. So shooting in an option for the higher level chaps sure, but new entrants also have a part to play.

One tactic I employed often was to let the meaner members run ahead while I loitered in the rear quarter slowly repainting the enemies artworks in my own luminous brand of noxious paint. Of course, if you do come under attack, there are some more substantial weapons to choose (the paint roller isn’t going to do much in a survival situation). 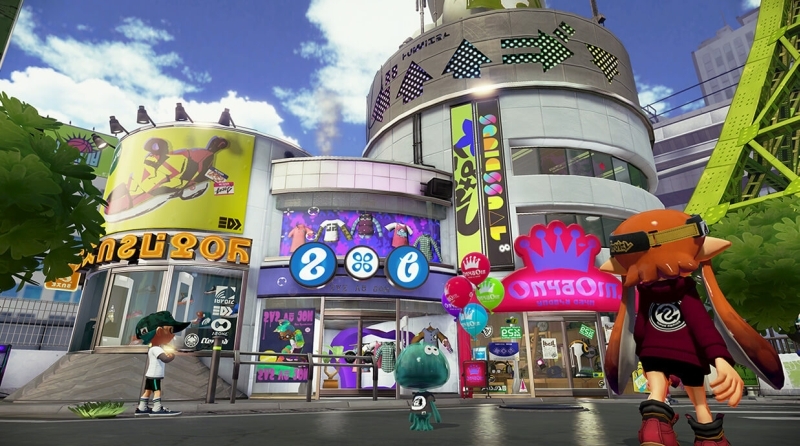 It’s fairly important to find the right balance between defense and attack. The opposition’s ink decreases your speed across the ground and overall health, so dodging and ducking enemy attacks while painting a path ahead are integral mechanics. There’s always a risk of you getting “Splattered” and retuning to the spawning zone, which is in itself, not such a bad thing either. Luckily, controlling your Inkling is a nimble process, providing you switch the idiotic Wii U GamePad gyroscopic controls off. The GamePad also displays a map which allows players to portal across the map to meet with teammates or to sneak attack some unsuspecting victims.

The more you play though, the better you’ll get, the higher you’ll climb up the level tree and the more crap you can purchase from the game’s central plaza (I’ll mention this in detail a little later).

Beyond the 4V4 structure though, there’s not too much to talk about.

Campaign mode feels like an afterthought bolted on to please the masses, and a way to practice offline for a big online multiplayer bout. Granted, it’s not where Splatoon‘s strong point lies but it definitely feels as though Nintendo brushed over this part of the game, perhaps with a fading paint brush.

The ultimate goal is to rescue the great Zapfish — the game world’s source of power — from a gaggle of evil creatures who has held it hostage. Each level’s progress is bordered by a boss, which are strangely easy to defeat. Nevertheless, it really is about honing your skills through the levels themselves than the actual end goal. And if that’s not your bag, it’s definitely worth it to meet Cap’n Cuttlefish, who is probably the creepiest expositional figure gaming as ever seen. 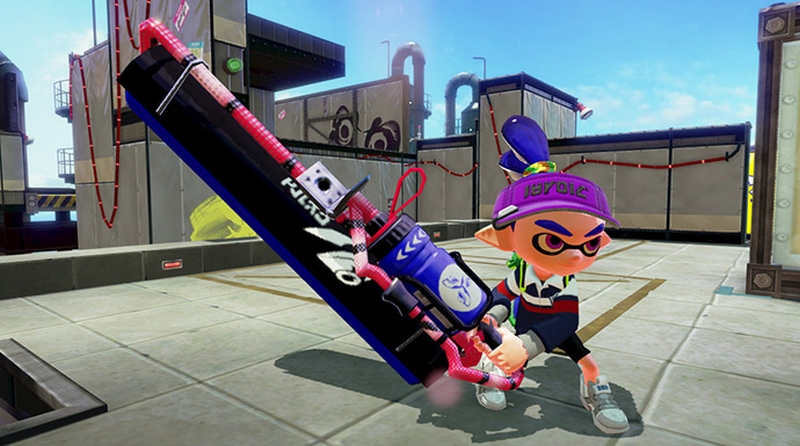 Beyond that, it plays much like a platformer with stages joined together through ink pipelines and launchers which could be a little more fun, especially if they were available in multiplayer.

And more fun can be purchased with in-game credits. After you’ve spilled enough paint, the game lets you purchase weapon upgrades, of which there are probably around 100 (I could be wrong here). Apparel upgrades also remind you that this is a game for Generation X and not quite sensitive Millennials, with headbands suddenly and alarmingly back in fashion. Of course, beyond their superficial Sunset Overdrive-like appearance, these items increase various biometrics, like stamina and defense.

A mode that doesn’t completely rely on this though is the local multiplayer. If you happen to be one of the few Wii U owners to have purchased a WiiMote or Controller as well, the Battle Dojo, or 1V1 mode, is for you. Playing alongside a physical friend also ensures you aren’t teamed up with the worst of humanity.

While Splatoon probably seems like the game that’ll revive the ailing Wii U, it’s not all sunshine and rainbows for the title. 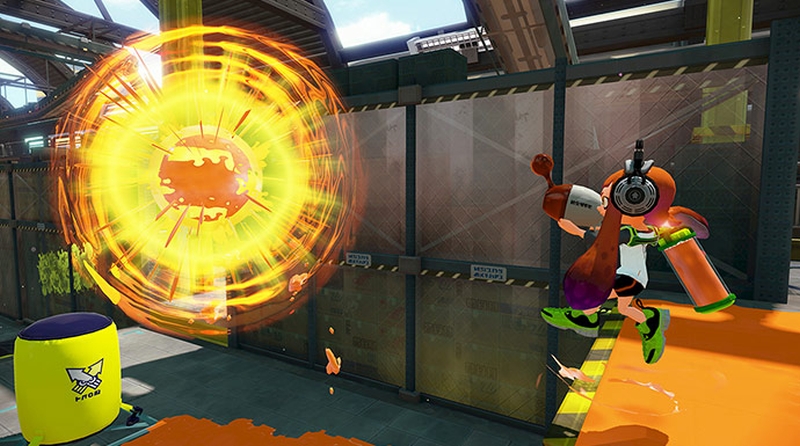 There are the obvious issues, namely the lack of private lobbies where private online matches can take place, and the extraordinarily thin single player campaign that feels like it really doesn’t really belong here or there. I’d also have to argue that the game’s lack of voice chat leaves it a bit soulless and vacant. It’s inspiring to have a Japanese gamer swear at you in his native tongue, especially when you’re all too busy minding your own paint roller at the back of a map.

No, but seriously, for all the brilliant touches of charm this game does possess, there are some flaws. But these can be patched quite easily, and who gives a damn? It’s easily the most entertaining shooter I’ve played all year, and speaking of shooters, I think Nintendo (of all companies) has just outed one of the most unique examples we’ve ever seen.

So the question really is this: is Splatoon the best game Nintendo has released in nigh-on five years? The answer is a resounding yes.

Verdict: Like I said, it has its flaws, but all games do and even these can be overlooked thanks to the game’s almost addictive playability. Splatoon is practically coded in fun. It’s bright and bold without being obnoxious and it’s technical and strategic enough to keep even the most ardent gamer hooked. It’s a refreshing take on the third person shooter, and finally, finally, gives the Wii U owner something to smile about. 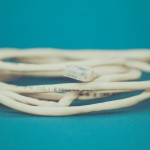