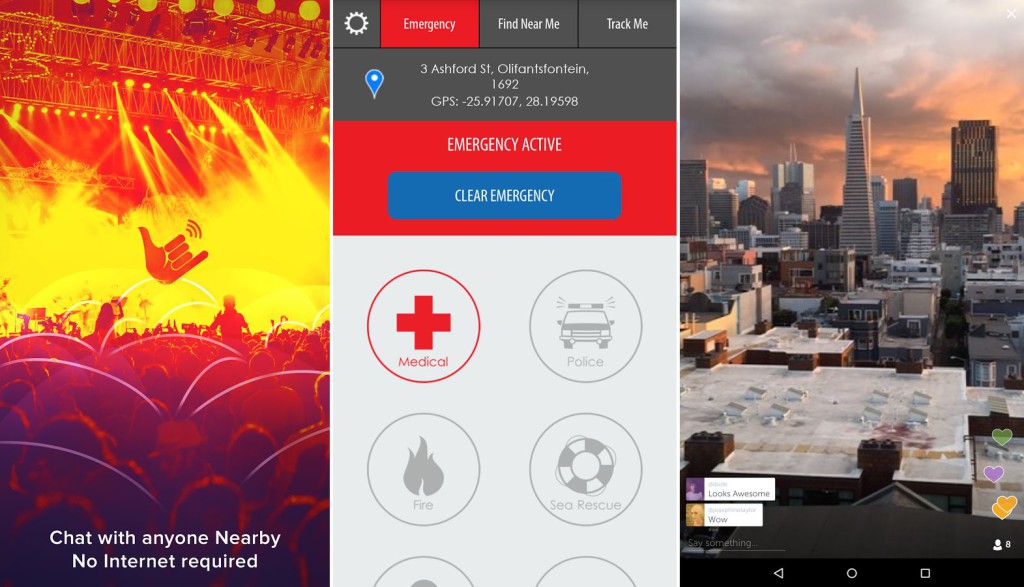 It’s not easy fighting for what you believe in, regardless of the end goal. It’s hard enough rolling out of bed in the morning on the odd occasion, but to literally take a stand for rights that you’re largely entitled to can only fill onlookers with admiration.

But protesting has evolved since the prehistoric days of pitchforks and torches. It has become an interactive digital social experience, often using social media to propogate ideas and organise large groups of participants. This has been demonstrated this week by the #FeesMustFall protests.

With that said, there are a number of essential apps and other services that can help those stay safe when out in the field, or informed when traditional means of communication fails.

Here is Gearburn’s essential app toolkit for those taking a stand.

Firechat has a history of being the de facto app for organising public demonstrations. Developed by San Francisco-based Open Garden, it uses mobile devices’ wireless connections and forms a mesh network — a daisy chain of devices all connected to one another wirelessly. Essentially, it doesn’t require an internet connection to communicate, thus the beauty of its mechanics.

The app debuted in 2014, but it was used in Iraq that same year when the government restricted the country’s internet access in the wake of its people’s protests. It was downloaded over 40 000 times.

Another mass organisation app, Celly was used during the Occupy protests in the States earlier this decade. It allows users to form “cells” or specific groups where thoughts can be aired in public.

While it doesn’t use a close proximity mesh network instead requires data to function adequately, it also means that it can cover a broader area. Users can also share images within the app which is especially helpful for keeping all connected to the network informed.

MySOS is a locally developed app and is essentially an emergency contact book in your pocket.

It lets users contact a host of emergency services and provides a database of hospitals, police stations and the like using geolocation. You can also add contacts as emergency contacts in a time of crisis, and simply opening the app will allow you to send an emergency message to said contacts. And if you aren’t too sure where you are, the app can track your location and alert those on your contact list of your whereabouts.

Download it for free for Android and Windows Phone. There’s also an easy to navigate mobile site.

If Firechat isn’t enough, and you ran out of airtime, free WiFi is your best bet. Luckily, major centres in South Africa feature public WiFi hotspots in all sorts of nooks and crannies.

Find Free WiFi is an essential app in my toolkit as well, and allows users to find free WiFi networks in South Africa. It’s the largest community driven network of its kind in the country as its developers claim, but we can take their word for it. The coverage list of WiFi networks on this app is huge.

It also lists the free data or time cap available on each network, while providing the exact address of each hotspot. It’s particularly helpful in areas like Stellenbosch, central Cape Town and Johannesburg.

Meerkat is another brilliant live streaming app, but Periscope gets our vote thanks to its seamless Twitter integration.

It took the world by storm earlier this year at SXSW in Austin, Texas, but has graduated from a fad to an extremely useful media propagation tool, allowing users to broadcast a live stream to Twitter followers and the web at large.

It also takes advantage of the Twitter hashtag system, which means that a large audience can be reached and comments can be attributed easily to the stream through Twitter.

While this isn’t an explicitly helpful tool, it does help to enlighten those not at ground zero to experience the events.