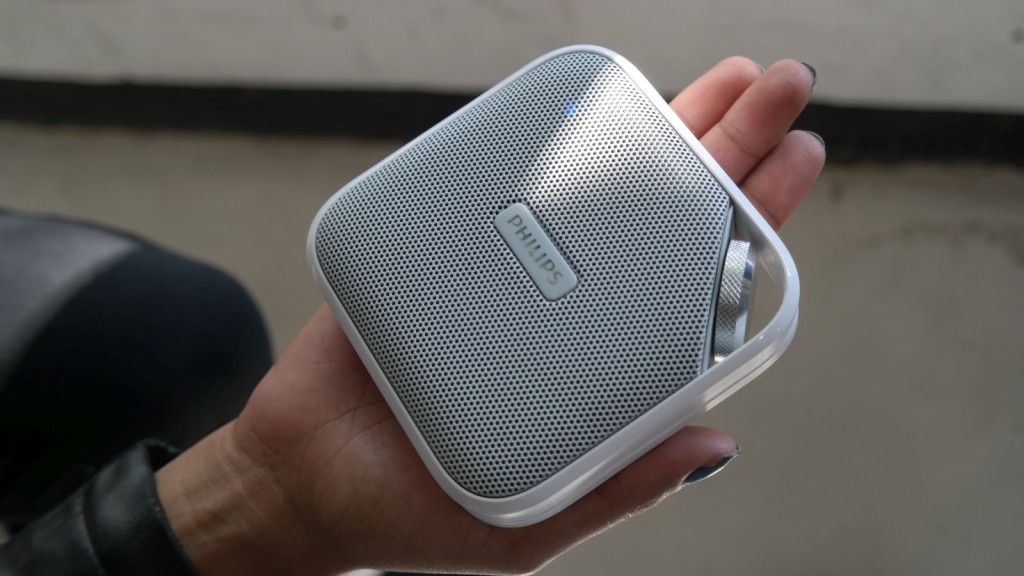 “What’s the bloody difference between them all?” That’s often a cry I hear from those trying to choose their latest portable boombox. And while it might sound a bit melodramatic, it’s actually a valid question.

Portable speakers practically all live and die by the same premise: they play music from another device using some brand of wireless witchcraft, and barely ever deviate from that. But the few good devices either do this particularly well, or have a few jokers up their sleeves.

The Philips BT2500 wireless speaker is more of a tale of the former. It’s crafted using a rather fetching mix of glossy silver plastic and metal inlays, and somehow doesn’t look tacky. Note, there’s a black version that also looks like it would do well in a trendy lounge. There’s a large metallic volume button hidden beneath a carabiner slot for strapping to a bag or pocket, with the control panel sitting on the top of the speaker. At the bottom, there’s a grippy rubber ring that allows the speaker to sit flush on a table without sliding about.

The control panel’s fairly simple too, with a large slider that features power off, Bluetooth on and line-in modes; a Bluetooth “pairing” button that lets devices pair with the box fairly simply and finally a charging port around the bottom of the device.

All in all, the Philips BT2500 looks fairly pricey but retails for a relatively modest R799. And with those notes, you get what must be the easiest Bluetooth speaker to use on the market today.

There are practically no issues at all when connecting to the speaker itself from a smartphone, and audio quality is crisp and clear. Perhaps the only gripe is the length of time it can take to pair, which is anything from two seconds to around 20 in some cases. Overall though, it’s as simple as snapping the Bluetooth slide across, tapping the pairing icon and finding it on the smartphone’s Bluetooth device list.

And it’s reliable across most Android versions as well, and not forgetting iOS as well. The speaker should work well with Windows tablets as well, although we couldn’t quite obtain one specifically for this review. Beyond the pairing, the sound quality is definitely worth a mention too.

Being it a portable speaker, it doesn’t do throaty bass lines any justice, but it will fill a fairly large room with enough sound to get people dancing. The 3W speaker is a lot louder than your average smartphone and features an anti-clipping amplifier built in as well, which reduces annoying distortion that can result with smaller speakers.

Overall, the bass might be lacking but it’s solid in all other audio aspects. And this is particularly useful when using it as a boardroom loudspeaker for incoming calls.

More annoying perhaps is the lack of an included line-in cable, which could be used to play music without the need for Bluetooth, saving battery. You’d expect a device retailing for more than R500 to include the relatively cheap addition, but nope. It’s gravely absent from Philip’s packaging. The claimed battery life of five hours is largely honest as well, and does last longer if you leave the speaker in standby without any music being pushed through. It should be just fine for those outdoor missions to the beach or forest adventures.

Verdict: While it isn’t the most rugged portable speaker we’ve ever used, Philips does extremely well to shove a polished speaker into an equally polished exterior. It’s easy to use and lasts long enough to be useful, and for R799, it’s probably one of the better deals in this space. We just can’t believe that there’s no line in cable. With that in mind too, don’t expect the BT2500 to do any Dr. Dre track any justice either.