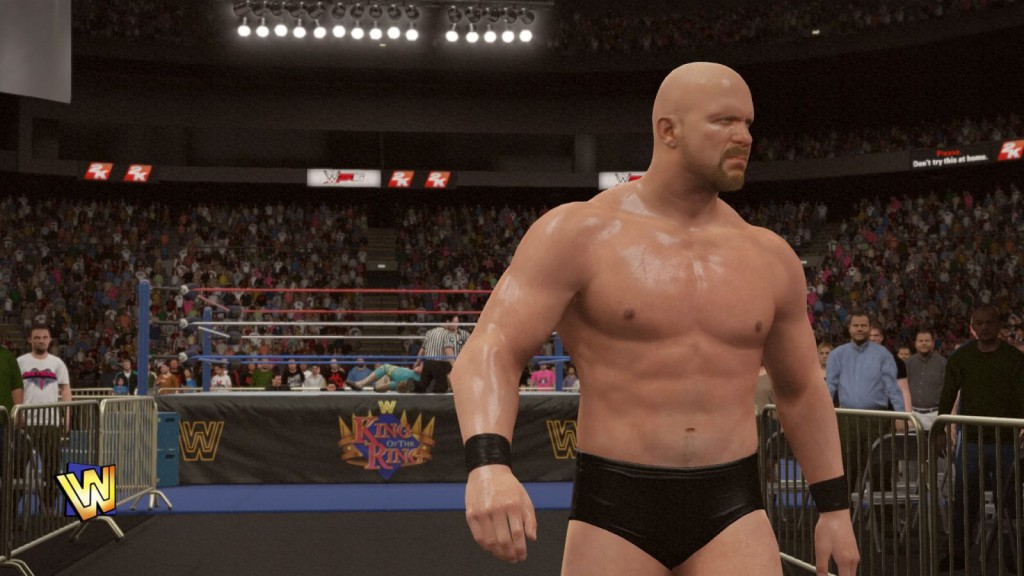 The Undertaker. Hunter Hearst Helmsley. Stone Cold Steve Austin. George Bush. If those names give you goosebumps and beckon you to smash someone over the head with a table, then you’ll probably love this game. And my, what a game it is.

It’s 2K Games‘ latest attempt at making a pseudo-sport a digital reality, and well, it’s definitely less fake than pro wrestling in general. In fact, the game brings out the extremely technical side of the sport, something age-old fans will love. Don’t get me wrong. I absolutely hate wrestling, even though I followed the WWE circus back when Bret Hart and Sean Michaels were the two worst dressed ladies in America. But recently, the business has become more akin to a soap opera and less an actual display of agility and guile.

After the hit that was NBA 2K16, 2K has been on a bit of a roll this year, especially thinking back to Evolve, and the DLC magnet that it was. But even 2K would find it difficult turning the actions of the WWE into a playable, coherent and fulfilling game, a difficulty that it has largely overcome.

One thing NBA 2K16 had going for it was its fluidity of motion, it’s brilliant graphics and it’s absorbing gameplay and this continues into WWE 2K16. It’s not the most free-moving or responsive titles you’ll play this year, but it’s a game fixed within its genre. That’s mainly the problem with sport-based titles. With that aside, I should just say this: WWE 2K16 is arguably the best wrestling game made this decade, not because 2K has more to work with come 2015, the characters or the general graphics, but the mechanics and the gameplay.

You’re obviously blessed with picking a number of different WWE Superstars and WWE Divas as well, with WWE Octogenarians an option too. After the opening screen, there are also a number of game modes available, covering the likes of a submissions-only match, a steel chair match and the infamous Royal Rumble, which is hella fun.

But something fans will love is the 2K Showcase: a mode that lets you literally relive the critical moments in certain superstars’ careers. You’ll start off with Stone Cold, beating up the likes of Jake The Snake and Bret Hart, and work your way up to I’m-not-giving-spoilers-away. Each event is blended seamlessly with actual footage, in-game cutscenes and gameplay that sort of sneaks up on you. It’s easily the best thing about this game.

Ronald MacDonhel was created using the game’s confusing character building system which I can only explain as an afterthought. It’s expansive, but as easy to use as the hadron collider. Nevertheless, with his suit-clad body, red afro and white face paint, I was hoping that he’d resemble my favourite restaurant maitre d’hotel. Not to mention that I could customise other elements too, from the signs the crowd held up to the wrestler’s country of birth.

Career mode, although a big of a slog, is also engaging.

In career mode, you work your way from the ground up. And I mean that literally. You begin with grappling, pinning, submissions and the standard wrestling fare in the training arena. Build enough hype and you’re thrust into the big time. I largely failed at this because, well, I didn’t actually take this seriously and I have scant patience for the repetition of career modes, but it was nevertheless something that a wrestling fan could easily get right into. And because I hate online gameplay, and anyone on the internet for that matter, I single-playered this sucker right through. That, and my internet connection is an utter mess.

Gameplay in general takes a bit of getting used to as well, and I wasn’t initially sure if my thumbs were operating normally or the game was taking me for a ride, because moving Stone Cold in the direction of Booker T, for instance, didn’t yield any results. There always seems to be a half-second delay to do anything in this game but I imagine that’s largely thanks to the unexplained mechanics. The game only ever tells you how to move, and never explains what all the bars and percentages mean.

It’s all a bit sporadic at times, both extremely engaging and frustrating.

I didn’t quite enjoy the reversals system either. It’s essentially a string of QTEs, except the longer you go into the match, based on your stamina balance, momentum held and overall health compared to your opponent, the more reversal QTEs you get. And they’re definitely QTEs. If I have to press R2 to reverse a move within a predetermined amount of time or at a particular point, that’s a QTE. With that said, I can’t think of any other way 2K could’ve incorporated this into the game, and it does make momentum shifts more common.

Overall, gamers and fans of the series will love the ability to learn special moves based on a range of specific button taps. Generally, triangle (on the PlayStation 4) is the finishing move, but the optimal conditions are required to pull it all off. It’s all a bit sporadic at times, both extremely engaging and frustrating.

Playing as Brock Lesnar, I couldn’t help but enjoy F5-ing everything I could find. There’s a degree of enjoyment here, comparable to Mortal Kombat before Fatalities became DLC, and that’s not to say your finisher will actually finish your opponent. But beyond the gameplay is the general graphics. On the PlayStation 4, it’s not the prettiest title, nor do the characters really change throughout matches. Yes, blood will gush from the veins of your enemies, and it looks quite sick, but I always knew it was just a few blushing pixels. It’s definitely an accurate representation of wrestler movement, but cutscenes lack more than just a bit of polish. There’s plenty of Bethesda-like blank stares abound.

There have been reports of glitches in game as well, but I can’t say that I’ve seen any to ruin the experience. If anything, glitches in titles like this are usually hilarious screenshot moments.

But with that said, I didn’t yet mention the biggest elephant in the room: it’s a game largely for the devout fan.

Is this such a bad thing though? I don’t know. For 2K, perhaps it is. I can’t imagine that the average gamer who doesn’t actually watch or respond to wrestling would pick this title up after that holiday bonus. Although one-on-one local multiplayer would be a fascinating prospect in this title, I’m not sure if it would be as popular a title as, say, the FIFA series, especially since it’s quite a financial investment. Ultimately it boils down to this: 2K Games’ hired help of Yuke’s and Visual Concepts did a stellar job, melding gripping mechanics, real world physics, wrestling folklore and thrilling gameplay into a coherent title that even a non-wrestling fan enjoyed. It’s not easy making sports titles, but WWE 2K16 is probably one of the better examples of the year.

Verdict: Let’s state the obvious: WWE 2K16 is a game for wrestling fans, but that doesn’t mean the average gamer can’t enjoy it. It’s filled with great moments, entertaining gameplay, and enough modes to keep you entertained for an eternity, but is it worth the asking price? And more importantly, will it appeal to the average gamer? Probably not.