Like it or not, we’re just over three weeks away from that annual holiday called Christmas, and that usually means busy overcrowded malls, felled conifers taking residence in your home, and lots of (fake) snow (if you’re in South Africa).

But if that’s not your cup of eggnog, we know that these Christmas-themed games and apps will definitely make you feel a lot better.

Gaming is, in many ways, the universal language of fun so lift your spirits at the end of a long year with these memorable downloads.

What would the holiday season be without our old stalwart Angry Birds? This year, Angry Birds Seasons is at it again, decking the halls with all sorts of cranky snowmen, green pigs and even more perturbed fowls than ever before.

Rovio promised users a new level for the 25 days leading up to Christmas — it’s like a gamer’s advent calendar — with a number of new ski levels to boot as well.

Fancy something that drains a little more mental fuel? This little app tests its users’ Christmas knowledge and unfailing cheer by answering riddles. These can be solved in your own personal time or in a group while waiting for the meal. It’s more social than the other apps on this list, so use that to your advantage while you sneak down a few cookies or two.

From the mildly intelligent to the downright adorable. Christmas Bear is an app that doesn’t do much, but it’s main star is an anthropomorphic Christmas hat-wearing teddy bear with a tendency to dance, giggle and utter some of the cutest things known to humankind. Touch the screen and the little guy lurches into life. It’s perfect for smaller kids, or if you’re really having a bad day, much older kids. It’s more a novelty app and less a game, but why not?

“Only you can save Christmas,” notes developer Zarapps on its App Store page, and that’s probably true. In this game, the Grinch is out to ruin things for everyone, as usual, and your task is to (quite literally) “click on it to kill it.” And you know what? It’s hilarious fun. See it as a Christmas equivalent to Whac-a-mole and you’re halfway there.

Using the same addictive formula as the Bejeweled and Candy Crush Saga series, Christmas Sweeper 2 replaces the semi-precious stones and confectionery with bells, bows and baubles, with other Christmas fare offered later into the game. We’re not sure how many levels there are, but there are definitely more than one could complete in one sitting, so be sure to play this when the weather outside is frightful. 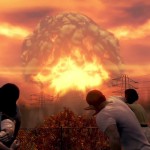