It’s zero-day at MWC 2016, and that means companies going tooth and nail to outdo one another before the gates officially open. And although HTC hasn’t a smartphone on display (or at least initially), the company has announced that its Vive VR headset will retail for US$799.

That’s around US$200 more than the Oculus Rift, which itself was panned for being rather expensive.

HTC’s joint venture with gaming giant Valve has resulted in the Vive VR, and is probably the most likely adversary to the Oculus Rift.

Rather interestingly, HTC is also thinking about the Vive VR practicality beyond VR. Vive Phone Services is the result, and allows users to take calls, read messages and do other mundane phone things without removing the Vive. It might sound trivial, but it does improve the VR headset’s usefulness.

The device will go on pre-order from 29 February and will begin shipping April 2016. 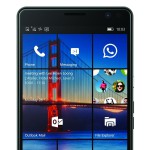