By Wiehahn Diederichs
Read nextSurprise! Counter-Strike 1.6 has been ported to Android

Between Me and the Night is Lisbon-based indie studio, Raindance LX’s, first released title and I must admit that I was quite impressed with their surrealistic point-and-click adventure. Although the game is not without its downfalls, it successfully delves into some deep and sometimes unnerving narrative themes, and with a depth I seldom experience in AAA titles.

Personally, it is another testament that indie developers are the pioneers that will discover the future landscapes of gaming. Between Me and the Night might not be perfect but it does make me incredibly excited to see what these developers will do next. This charming point and click adventure challenges perspective through the imagination of a young boy. The narrative guides us through the boy’s childhood home, offering the player the opportunity to interact with memory and experience via the objects and moments encountered within the house.

Although this may appear simplistic, as the game progresses we begin to further understand the realities which challenge our character. The game adopts a Freudian flair as we are thrust into the dream world revealing insight into the boy’s emotions and desires, which contradicts the environment he cannot seem to overcome in reality.

The game progression runs adjacent to the boy exploring and picking up of objects which link to puzzles within each room in his Eighties style, three-story family home. The red-haired, semi-faceless boy navigates the gloomy house during the day and dark, spooky evenings either revisiting memories of bickering parents, school bullies, or dealing with monsters and the mundanities of life. It becomes apparent that the boy has an admiration for an arcade character, the Generic Knight, as he falls into a dream state and ‘becomes’ the Knight. The player then walks through scenes of icy tundra’s facing other villains and allowing the boy to employ dreaming as a means of escapism from his seemingly tiresome life.

Between Me and the Night sports a fairly simple control scheme but one that’s executed in a rather frustrating manner. Movement and simple interactions (WASD and E respectively), like activating light switches or opening doors, are pretty straightforward.

But when it comes down to the actual pointing and clicking things did feel a bit foreign compared to most games of the same genre. For starters, your cursor won’t be visible until you use left click. Here the boy will come to a standstill and you enter a sort of inspection mode where you are able to hover your cursor over objects to either inspect them or pick them up.

You will also only be able to see if you can interact with object while in this state, forcing you to constantly move in and out of this inspection mode. This was an aspect that I personally felt really broke the flow of the gameplay.

The game’s pace is slow and steady (although you are able to sprint it’s like moving between the speed of a snail and a tortoise), probably in an attempt to allow the player to truly consider the environments. The boy also has an inventory space allowing for only five items at any given time while rooms hold countless numbers of objects that are not clear as to being useful or useless. Logical puzzle complexity is enjoyable but spending a large amount of time aimlessly clicking on objects feels comparable to the procrastination experienced when tidying through your chest of drawers.

The puzzles and the lack of direction with regards to the narrative does leave the player with a sense of annoyance at times but is fortunately contradicted by the curiosity around the boy’s life.

The boy navigates through what I would consider three “life periods,” all equipped with their own monsters and demons. While in his family home, these monsters would skulk about in the evenings and can be fought off using lights or objects in your inventory. If a monster does manage to catch up with the boy, he will respawn back in his bedroom. As afore mentioned the defeating or side-stepping of these monsters will allow for game continuation, but the position reset cannot be evaded with a save game option as it is non-existent. Furthermore, if you exit the game while in a chapter your next play session will take you right back to the start of that chapter. It seems this game is bent on taking things very slow.

The boy’s monsters are quite unnerving as they appear spontaneously and move particularly fast, which is even further enhanced by their rather sinister appearance. They aid in unravelling the psychology behind the boy as one lurks above his bed while another tall, gangly one paces behind him down the school hall.

Interestingly, the character is not made to react to his monsters. Throughout the game he remains collected and without expression which can be quite discomforting in itself. It is evident that this young boy has some serious latent psychological damage ranging from abuse to abandonment, but that’s just my opinion. The game is expressed in colourful, 2D visuals and delightfully so, as more often than not topics regarding to eerie, dream or memory based scenes are translated in black and white. The decision to render this in colour is effective and the night scenes are met with a genuine sense of realism as it can be related to real life scenarios.

As the boy acts as his Hero, the Generic Knight, we are thrown in to scenes which appear more textured in nature. Throughout the game we are really grappling with some ideas around surrealism, as his bright and glowing television grows spider’s legs and scuttles away. I thoroughly enjoyed the game’s artistic expression and wash of synth-minor chords echoing the dreariness surrounding the narrative.

Also, there are several optional side quests within the game that you can indulge in. The player has the option of gathering objects that are similar in function or use, which when completed creates a giant poster for the young boy. Other side quests include a variety of retro arcade games which can be played on the boy’s television along with Generic Knight. These games are well rounded as they function in pixelated panache and are supported by 32-bit sounds reminiscent of Tetris on your Gameboy.

Verdict: Between Me and the Night skilfully deals with ideas around repressed memories and the triggers that cause them. It intellectually tells the tale of a boy utilizing his affinity towards a heroic character in the virtual world to tackle the issues he faces in the real world which is something to be admired. Though the story itself is lacking in real progression and the tasks presented to the player throughout gameplay are deficient in flow, the atmospheric blend of visuals and music manages to surpass all that. Regardless, RainDance is a first-time developer and I feel that they have successfully created an immersive title in which to get lost in and one that conveys an enormous amount of potential. 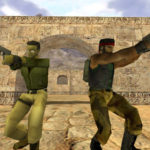