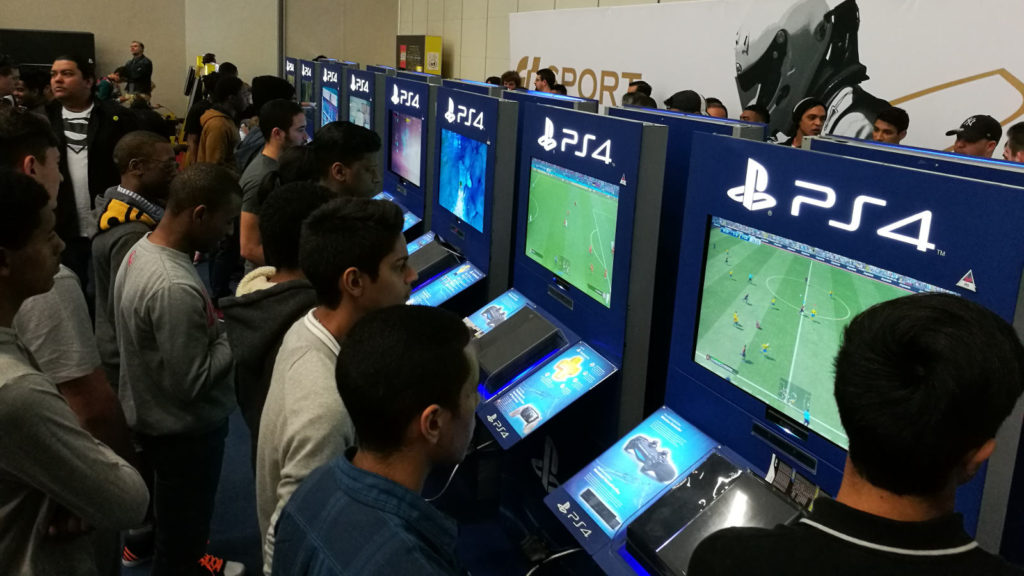 Last year’s Electronics and Gaming Expo (EGE) proved what we already know: there are hordes of expo-starved Cape Town gamers out there.

The debut event wasn’t on the level of Johannesburg’s rAge, as we saw no unreleased games unfortunately. Still, between the local content, gaming-related wares, tournaments and food trucks (it’s an attraction, okay!), it made for a decent first event.

One of the organisers said at the time that the 2016 event would take place after E3, with hopes that playable code would be available for the expo. So how did the 2016 showing fare on this front?

Fortunately, Sony and Ster-Kinekor Entertainment brought two notable unreleased titles in the form of Gran Turismo Sport and Gravity Rush 2, being playable on the show floor.

The distributor told Gearburn in the days leading up to the show that they were trying to secure Horizon: Zero Dawn for a behind closed doors playthrough. Although this didn’t happen, the presence of two prominent unreleased titles made for a good showing nonetheless. In fact, the PlayStation booth was easily the biggest gaming booth around. The biggest downside here was the lack of playable booths (or in most cases, booths in general) from Megarom Interactive, Nintendo/Core Group, Apex Interactive, Xbox South Africa and other distributors of big international releases. Still, if all the other distributors had to offer were previously released games, it wouldn’t have been as big a loss.

We also saw plenty of local games showcased at the event too, under the IESA and Make Games SA banner. Titles from the likes of RetroEpic (Carrier Deck and more), Free Lives and partners (Broforce, Wrestling with Emotions, Mergerzerds), prominent local Windows developer RogueCode (VALA: Alpha) and more made for a rather impressive lineup.

I got the impression that there were less people at the show than last year, until fellow attendees pointed out that the floor space was much bigger this time out. In fact, I’d go so far to say that it was about 40 bigger at least, with most of the new space being allocated to gaming tournaments, it would seem.

A heavy emphasis on competition And there were some lovely prizes on the tournament front, such as a R40 000 cash pool for the Call of Duty tournament. In fact, O’Shea said that “almost all” the single-player tournaments had a R5000 cash prize, R3000 second prize and R1000 third prize. Dota 2‘s LAN saw a R5000 prize pool as well.

However, the Counter-Strike qualifiers had the most impressive prize of all, sending the winning team to Paris to compete at the Electronic Sports World Cup (ESWC) in October.

What else to see and do?

Other than the local game development booths, PlayStation stands and tournaments, there were more than a few things to keep you hanging around.

Easily one of the most attractive demos were for the VR headsets, as gamers could check out the HTC Vive at one stand and play Project CARS in VR at another. And yes, both stands had queues, although nothing quite like last year’s lines.

There was also a cosplay competition, 3D printing stands, several food trucks (along with more traditional food/drink stations), about a dozen merchandise/comic/miscellaneous stores, PC related booths and two dedicated gaming storefronts (one being Pwned Games and the other being Makro). Of course, there were also booths from the likes of The Animation School and Friends of Design, for those interested in a game development/animation career. So then, EGE 2016 made for a good showing this year, delivering on the “bigger and better” marketing that generally goes with a sequel. Between the ever-reliable PlayStation presence, stepped up tournament focus, VR demos, local games and merchandise on offer, there was definitely a lot on offer.

There are some areas that could do with polish though, such as pre-event marketing, better rules for cosplay (a cosplay enthusiast cited constantly changing rules as a reason for many cosplayers staying away) and support from more distributors. It would’ve also been lovely to see more VR content though.

Speaking of marketing, a rather intriguing talk on the SA game development scene, (featuring the likes of Nicholas Hall, Lars Espeter, Megan Bridges, Evan Greenwood and more) wasn’t well advertised. In fact, I only found out about the talk from Espeter the day before, while the official EGE schedule showed cosplay in the time slot. Weird.

Compared to the first Cape Town rAge, EGE 2016 lacked big name distributor support and the impressive tournament setup (at least on the show floor itself). But between the couple of unreleased, playable games from Sony, interesting local wares, the aforementioned panel dicussion and wealth of gaming tournaments, I’d call EGE the better show for gamers.

What did you think of EGE 2016? Let us know in the comments below!