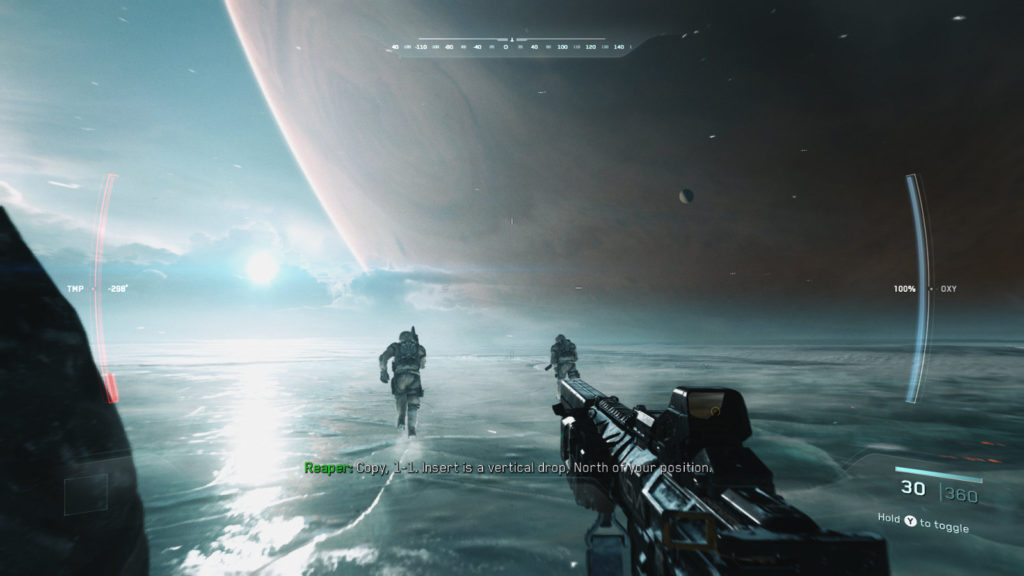 Over the years, the Call of Duty franchise has become the Michael Bay of video games. Big explosions, large set-pieces, and looked down upon by plenty of “connoisseurs”.

Upon seeing the trailer for Infinite Warfare and its space-based setting, it seemed like the prevailing opinion was “well, I guess they’re running out of ideas”.

Still, is the campaign enough to bring lapsed fans back into the fold?

That space setting though It has to be said that, whether it was meant as a “throw crap against the wall and see what sticks” approach or not, the space setting makes for one of the best settings in a Call of Duty game.

The campaign will have you going to the Moon, the Jovian moons, Titan, and quite a few other exotic venues in our solar system. As a result, you’ve got a game that, while not fully eschewing traditional corridor/urban shooting, still manages to offer a unique visual feast.

In other words, this is Call of Duty firmly going into sci-fi territory. It sounds odd for the franchise, but it works really well and space nerds will quite like it.

As for the production values, the various locations look fantastic for the most part, such as jagged alien peaks, the initial icy Europa stage, and a stage taking place close to the Sun. It all makes for an experience that has you eagerly wondering where you’ll be off to next, while marvelling at most of the locales. The character models aren’t anything to scoff at either, with some detailed faces to be had, but in saying so, your grunts and robots are rather bland.

Call of Duty: Infinite Warfare is better for the switch to space and other planets

Additionally, some environments clearly didn’t get enough love. For instance, one air combat mission on a watery planet has an ocean that appears more like a stretched, shiny carpet. Fortunately, this is usually the exception rather than the rule, with most levels looking the business. This is in large part thanks to the cool lighting effects, as fires reflect off the surroundings and off your weapons, or explosions resulting in a cascade of debris.

There are a few levels that definitely evoke last-generation drab colours, such as Geneva. But again, this is more of an exception rather than the rule. The voice acting is largely up to scratch as well, with robot soldier Ethan being the standout though. As for the actual story, it’s pretty much “people from Mars attacked us, so now we have to fight them”. Don’t go in expecting an epic yarn with loads of twists and turns. In fact, I couldn’t bring myself to care about the Martian enemies, the plot merely casting them in the same role as stereotypically evil German/Soviet/Middle Eastern enemies seen in previous games.

Anyway, the plot is effectively just an excuse to travel around to the various locales, but it’s serviceable enough.

As someone whose last CoD experience was Modern Warfare 2 and Black Ops, Infinite Warfare definitely has the Call of Duty DNA, for better or worse. So that means light, responsive controls, the familiar x symbol on your crosshairs when you connect with a shot, grenade indicators… It has all the trappings of a CoD game.

But Advanced Warfare‘s jetpack-style features make an appearance too, making for an even faster-paced experience, while the occasional zero-gravity section pops up as well. Still, the fundamental shooting mechanics are well-polished and as satisfying as ever. There’s a solid variety of weapons too, ranging from assault rifles and shotguns to sniper rifles and rocket launchers. In saying so, I’d dig Halo-style DMR rifles or grenade launchers and the like, but the mix of weapons, especially the energy variants, are welcome anyway. And in a cool touch, quite a few of these weapons have significant secondary functions, such as an SMG’s ability to split into two guns, an underslung shotgun on one of the guns, or a sniper rifle’s ability to become an assault rifle.

Nevertheless, if you’re seriously tired of the traditional CoD gunplay and want something drastically different, you’ll want to give Titanfall 2 and Battlefield 1 a look. Everyone else will feel right at home. Well, almost…

Dogfighting is a thing

Once you’ve played through a few missions and successfully taken control of a spaceship, you’ll have the opportunity to undertake optional missions. Some of these missions feature traditional CoD gameplay but most of them see you pilot a fighter craft.

Yep, a substantial addition this year is the inclusion of dogfights in the game, as you step into the cockpit of a spaceplane to take out enemy cruisers and fighters. These sections often play out with a dozen enemies to take down, as you dodge missiles and rain fire on the bogeys. You’ve got standard guns, close-in cannons, missiles and flares at your disposal – the missiles are limited though, so you’ll need to call for a resupply drone in the heat of a battle. And yes, you can unlock upgrades for your weapons and craft too. The space combat is a welcome addition, giving you a fair amount of open space to play with as you jink and scythe your way through enemies. And taking out larger enemy ships is always a satisfying feeling. It’s not perfect at all though, as dogfights feel extremely fast-paced and almost on-rails for some reason, akin to Ace Combat: Assault Horizon. So those hoping for more of an Elite: Dangerous, Colony Wars or Freespace 2 type of experience will be sorely disappointed. It’s fast and simplistic, really.

Still, I always had fun in these sections and the addition of an enemy hitlist is a great bonus too, allowing you to go after notable enemy aces in the various missions. Given enough gameplay variety, polish and content, I get the impression that this could definitely serve as a standalone digital download.

Meat to the bones?

As is the case with Call of Duty in general, you can finish the campaign in eight hours or under — throw in a few more hours for the optional missions. But the addition of the stalwart Zombies mode will also give you more bang for your buck.

Levels are more expansive here, although the fact that there’s only one (albeit large) level is very disappointing, especially if you’re like me and don’t do adversarial multiplayer at all. The addition of Fate and Fortune cards also spices things up somewhat, but overall, it’s still an enjoyable mode for a game night.

Verdict: Call of Duty: Infinite Warfare does a great job of going the sci-fi route, spicing up the tired franchise’s urban warfare shtick in the process. Throw in Advanced Warfare‘s gravity-defying shenanigans and some entertaining (albeit simplistic) space combat and you’ve got a title that single-player fans will dig. 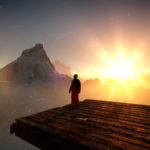