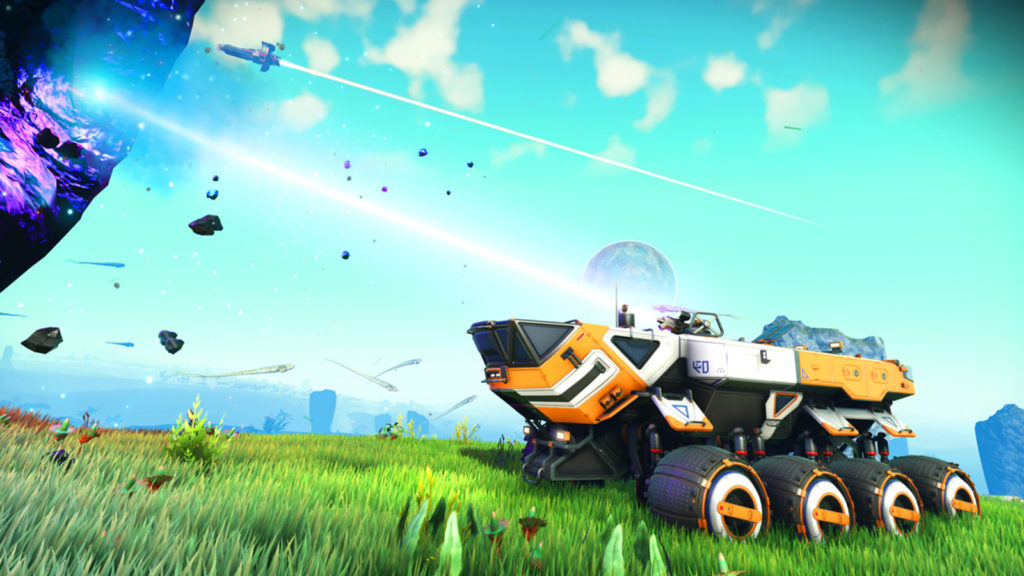 We’ve already heard that the Path Finder Update for No Man’s Sky brings new planetary vehicles to the title. Now, Hello Games has announced a full feature list, including PS4 Pro support, enhanced visuals, base sharing and much more.

In the visual department, the PS4 Pro update brings 4K gaming to the title, but there are also visual improvements across the board, such as HDR support and more visual effects. PC gamers will also be pleased with high and ultra resolution texture options.

Base sharing is another notable improvement in the update, delivering the ability to upload your base to the internet and have other players visit. Speaking of bases, Hello Games has doubled the number of customisation options for base-building, owing to over 40 new parts, new material decorations and more.

The ship ownership features have also been drastically improved thanks to the ability to own multiple ships. These can be stored in the hangar of your freighter. “This is even more meaningful with the introduction of ship specialisation, classes (A, B, C or the rare S class) and the ability to trade in previous ships against new purchases,” Hello Games elaborates.

A similar system has been implemented for multi-tools, delivering specialisations and classes, as well as the ability to trade in an existing multi-tool for a discount. And yes, we also see new weapon modes for terrestrial and ship combat.

The studio has already revealed that new vehicles will be introduced, now, we’ve seen more details on these so-called exocraft. “These land-based vehicles give new meaning to planetary navigation, combat and mining — and can be summoned from anywhere on the planet they were constructed upon,” it added.

There are three types of exocraft on offer, being equipped with cargo holds, long-range scanners and more. But you’ll need to hire a Vy’keen Technician for your base and complete several missions to acquire these vehicles.

In a rather interesting touch, players can also create their own exocraft time trials and challenge others to beat it.

The commerce side has also seen improvements, in the form of new shops and traders at stations and bases, a new currency and blueprint stock that periodically refreshes.

Two other major features include a permadeath mode and a photo mode — the former ending the game if you die and the latter allowing you to take all manner of wonderful shots.

Check out the full patch notes below

• It is now possible to skip the ‘Journey Milestone’ black bars, and these have been reduced or removed in many areas.
• NPC interaction text now appears faster, and can now be skipped.
• The option to return to ‘Game Mode Select’ has been added, allowing players to quickly change game mode
• A Mission Log has been added to allow players to track multiple objectives
• The user interface has been made easier to read in many places, and background graphics have been added
• Atmospheric low-flight has been adjusted and improved
• Ships, weapons, vehicles, freighters and bases can now all be renamed.
• Long-clicks have been removed in many menus places to allow for faster interface navigation

• Fixed NPC terminals and ladders being removed from the central room of bases after the player leaves
• Moved snap points for the glass corridor to be correctly grid aligned
• Galactic Terminals now have consistent pricing, regardless of where in a base they are added
• Fixed plants not being removed after removing the planter below them
• Deleting a room now refunds not only the room itself, but also its contents
• Fixed some plants and rocks not being removed when placing down a base building part
• Fixed the colour of the base terminal light occasionally resetting to red
• Terminals no longer can be build over windows in the central room
• Fixed base building colours becoming corrupt under specific circumstances
• Fixed some NPC missions counting the number of parts in your base incorrectly
• Fixed landing pad not snapping correctly to some parts
• Fixed issues where resource harvester would fail to gather resources
• Left mouse button and right trigger can now be used to build
• Fixed various precision problems with building in freighters
• Fixed some cases where grenades would fail to edit the terrain
• Organised parts in the base building menu to be more intuitive

• Added animation within the Quick Menu
• Changed the hyperdrive stat to be measured in Light Years
• Opening the menu will now return to the last page you viewed
• Added a new Tech stat section to the Tech info popup
• Improved mouse smoothing
• Improved mouse sensitivity
• Clearer and more detailed multitool, ship and freighter comparison screen
• Fixed flickering transition between Inventory and Options Menu pages
• Reduced number of menu options requiring a button to be held rather than pressed
• Improved responsiveness of button holding
• Fixed a bug in the options menu where the title bar would flicker
• Improvements to discovery timeline UI
• Added ‘Set Waypoint’ option to the solar system pop-up
• Improved alignment at aspect ratios other than 16:9
• Prevented player notifications showing up during credits and redeem screen
• Fixed issue whether error messages would be shown for charging and repairing before the options had been selected
• Increased icon resolutions to support play at 4k resolutions
• Fullscreen effects are now correctly displayed when entering a hazard
• Disabled the quick menu while warping between systems
• Removed obsolete Generation Detail option in settings
• Updated display of new discoveries to be clearer and more readable
• Fixed some Japanese and Russian localisation issues and text overlap
• Made cinematic black bars less frequent and obtrusive
• Made it so cinematic black bars can be dismissed
• Race standing is now displayed on the journey milestone page
• Fixed various windows occasionally appearing partially offscreen
• New visuals and backgrounds on mode select, options and inventory screens 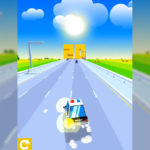