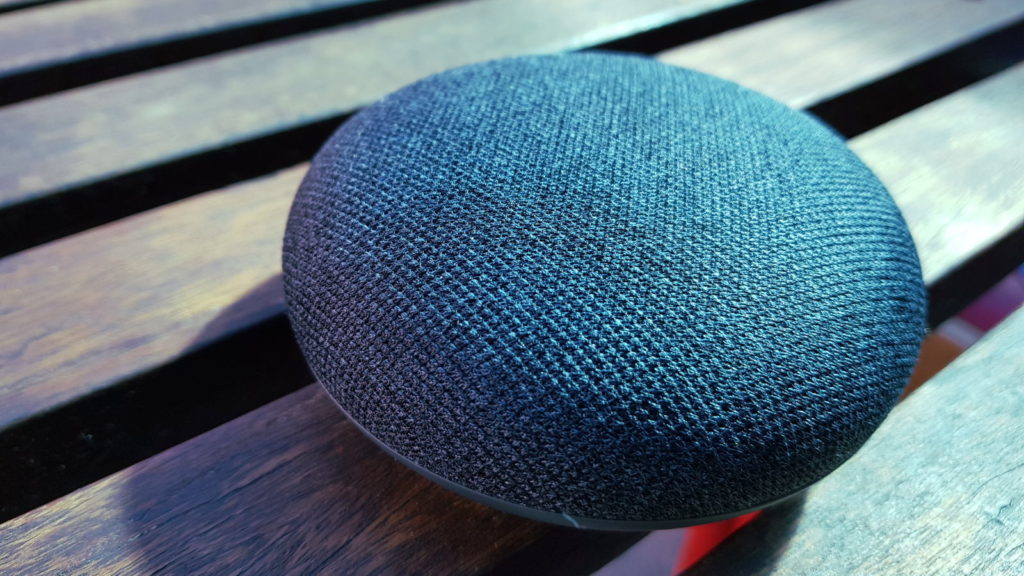 Slap an AI assistant onto a speaker and you’ve got a smart speaker. It’s simple stuff really, but a formula that’s proven rather popular in the past two years or so.

Amazon and its Echo range were first off the bat and seem to be the market-leader right now, but the Google Home range has also carved out a solid niche for itself.

These products aren’t available in South Africa, so when a work visit to the USA popped up, I grabbed the opportunity to buy a Google Home Mini for US$30 from Walmart (usually US$50).

At this price, it’s cheap enough that, even if you do suffer from buyer’s remorse, it’ll be pretty fleeting. And the size means it won’t take up much space if you decide it’s a piece of crap and need to stow it away. But is it worth getting if you do find one? We review the Google Home Mini. 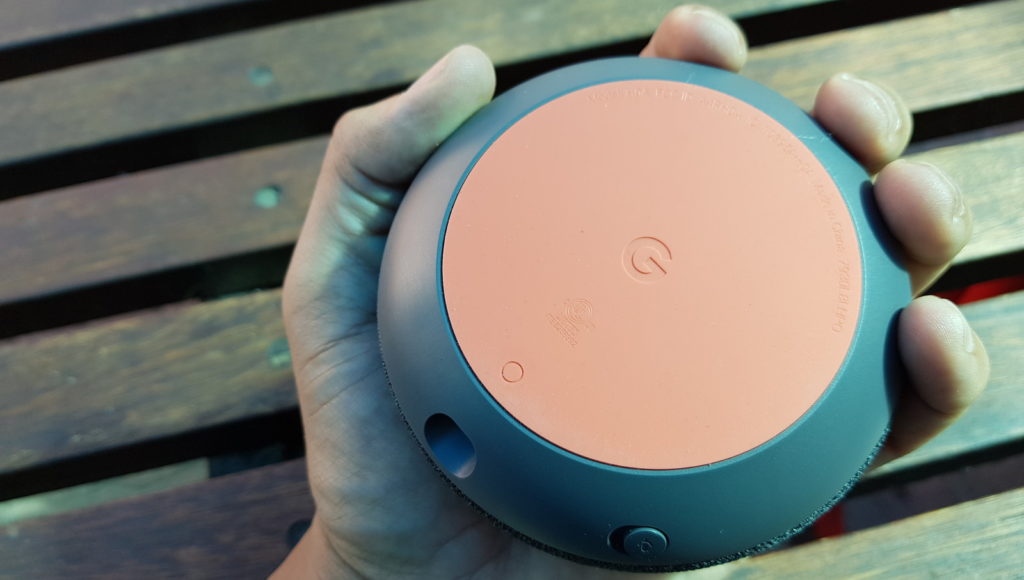 As the name implies, the Google Home Mini is small indeed, being no bigger than your portable Bluetooth speaker. It just about fits into the palm of my hand, while the entire bottom is rubberised to keep it firmly in place.

In terms of aesthetics, it’s got a pleasant fabric-type material for the speaker covering, not using metal mesh or anything like that. It certainly punches above its weight in the looks department. Sure, it doesn’t look like a premium speaker, but it doesn’t look cheap, either.

In the I/O department, it uses a microUSB port for power, so you don’t need to use the included US adapter — many older smartphone adapters and charging cables will power the phone just fine. In fact, a few redditors showed that you can actually use the speaker via power bank, giving it outdoor capabilities if you need it for a camp. You’ve also got a switch to turn off the always-listening option, for the more privacy focused user.

There’s no audio jack here though, which is quite the oversight for aux playback. You’d think it’s a no-brainer, but it’s not here. It’s not a train smash if you’ve got Google Play Music or if you don’t mind pairing via Bluetooth, but it’s a notable omission for a cheap speaker of this nature.

The Home Mini also sports invisible “buttons” on the top (to activate listening) and on the sides (to adjust volume). I would’ve liked tactile feedback of sorts for the latter though, as adjusting sound in this manner isn’t intuitive by any measure. In fact, I found adjustment via voice to be more convenient.

As obvious as it sounds, I found that the Home Mini comes into its own as a music or podcast playback device. The device supports Google Play Music (as well as Deezer and Spotify) for both music and podcasts and voice commands were mostly accurate here. Just don’t expect super specific commands.

Tell Google to play genre/mood specific music (80s rock, music for the morning etc) and you’re good. Tell it to play specific artists, tracks or albums and it works as advertised too. Tell it to adjust volume? You’re sorted. Tell it to like that track? Sure. But try drilling down for more specific requests and the Google Home Mini has no clue.

“Okay Google, play the seventh song,” I command it, after asking it to play a specific album. “I don’t know what you mean,” the speaker retorts (I’m paraphrasing here), forcing me to say “okay Google, skip the song” six times. I couldn’t even say “okay Google, skip six songs” or anything like that. Nope, I had to issue six separate commands. “Why don’t you just tell it to play that specific song?” I hear you say. Well, I either wanted to listen to the second half of an album or it couldn’t recognise the track I wanted.

Who needs a Bluetooth speaker when the Google Home Mini does a great job too?

Nevertheless, using the speaker and Google Play Music was a pretty satisfying experience, but you’ll definitely need to return to the phone for more advanced requests and tweaks.

As for overall audio quality, it sounds about good as a similarly sized Bluetooth speaker. Definitely expect tinniness anytime you crank the volume up, but it is capable of some pleasantly loud volume though.

The Google Home Mini makes for a great bedside music streaming platform then, especially for only US$30 on special — but what if you don’t care for music and podcasts? 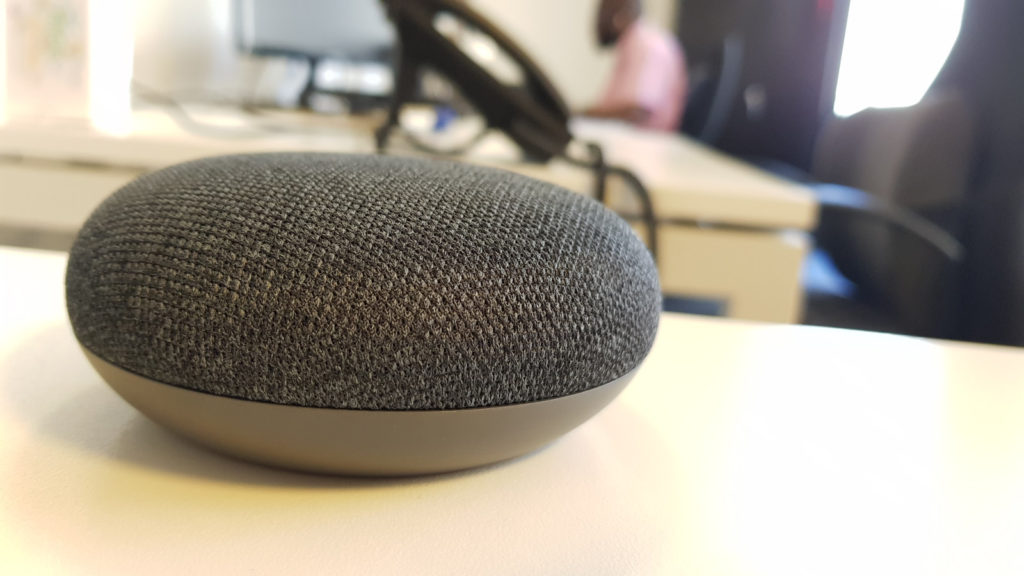 The Google Home Mini works reasonably well for general voice commands, being pretty accurate. I did find myself softening my Rs and speaking a little slower (no upward inflection though) now and again, but most of the time, this was just me being overly cautious, I suppose.

In terms of volume, I thought it’d be a case of having to sound out everything, but I was surprised to see that it could even catch my barely coherent early morning commands. And it’ll respond to a loud “okay Google” if you’re in the next room too — you might have to get a little closer for commands though.

Speaking of commands, those who’ve used Google Assistant or Google Now before will have a solid idea of what to expect. Between reminders, alarms, traffic alerts, news and general queries, the Google Home Mini has a solid, practical foundation to work with. Then there are the other commands/queries, such as casting from a browser to the speaker, controlling video content to your TV via Chromecast, controlling smart devices and creating shopping lists.

Context-awareness is an important factor for voice functionality and one that the Home Mini manages to capture reasonably well. “Okay Google, set my weekly alarm for 6am” followed by an “okay Google, cancel that alarm” will generally work just fine, the Assistant keeping track of the previous command. But I did find context to be occasionally lost when asking to resume music a long time after it was paused. Odd.

As for third-party apps and services? Well… there’s a selection of compatible apps to be found via the Home app, but the list of apps seems to number in the dozens rather than hundreds or thousands. A specific Google Home/Assistant-enabled field in the Play Store would be nice.

If you’re hoping for a burgeoning ecosystem on your cheap smart speaker, you’ll need to buy Amazon’s Echo Dot, boasting over 15 000 “skills”. But there are enough commands/queries/third-party apps here to make the Home Mini feel useful.

Google insists that its hardware needs to be localised for South Africa first before we see an initial release. But I found the speaker to recognise my commands just fine, while the integrated services are also available in SA for the most part.

There is one area where you’ll feel the lack of localisation though, being in the news department. Sure, you can customise news for current affairs, tech, business and so forth, but there are few news sources to begin with. And no South African sources. Boo.

In any case, the Home Mini works just fine in SA. Switch your phone to UK or US English, download the Home app and you’re sorted. But if you’re buying the speaker with the hope that more in-depth localisation takes place, don’t do that. There are just no guarantees yet. 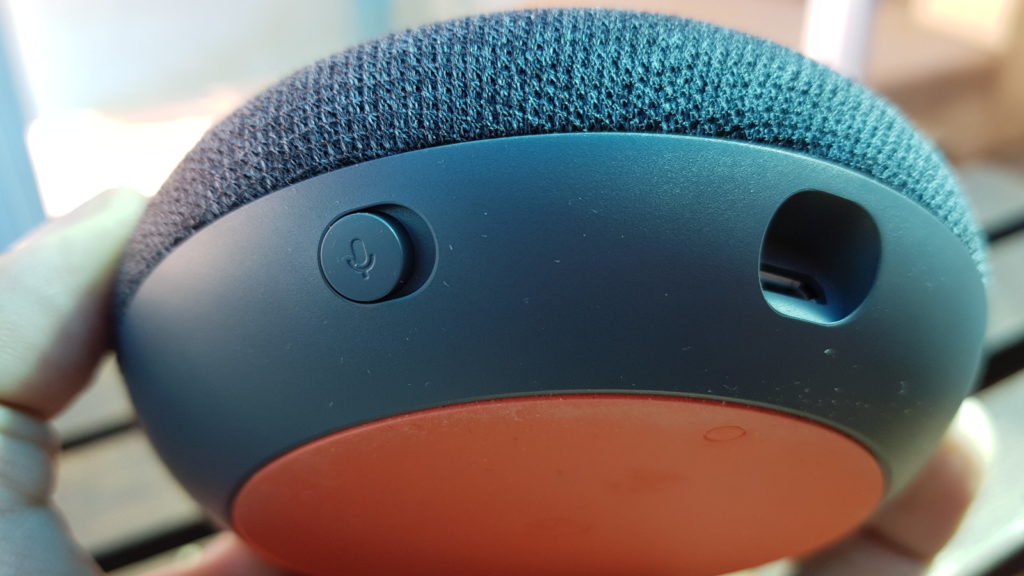 For US$30 to US$50, the Google Home Mini is certainly a bargain for those looking to dip their toes into smart speaker waters. But you should know that the smart speaker is still in its formative years and it could be argued that there’s no killer app yet, the speaker pretty much duplicating what your Assistant-enabled phone can do.

For everyone else wanting an affordable streaming music/podcast/query/smart hub/Bluetooth speaker box, the Google Home Speaker is a cheap, full-featured addition. In fact, I’ve come to enjoy its presence on my bedside table, with my calendar, music, alarms and more being an “okay Google” away. Now, about more developers getting on board…

Oh yeah, we’ve also noticed grey imports of the Home Mini retailing for over R1400 locally — that’s over US$110. Either get a relative or friend to send it to you from the US or use a package forwarding service for a much better deal.

Verdict: The Google Home Mini isn’t flawless, owing to a dearth of developer support compared to Amazon, the inability to drill down for hyper-specific commands and odd design choices (where’s the headphone jack?). But for US$50 or less, it’s an ideal introduction to the world of smart speakers. 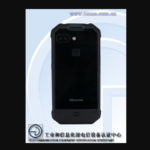