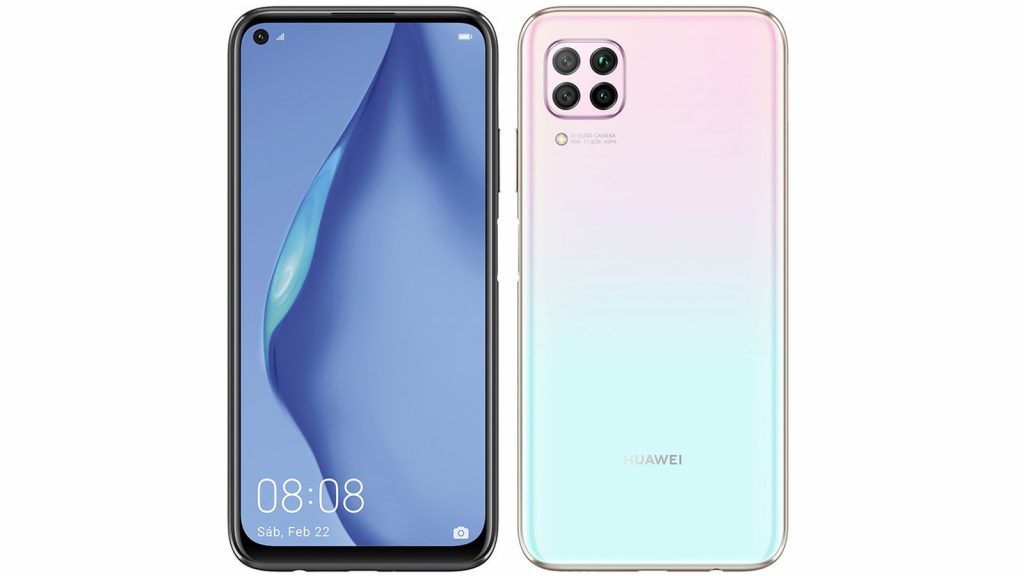 Facing off in South Africa’s highly-competitive mid-range category, the iPhone SE 2020 and the Huawei P40 lite are two smartphones gunning for a place in your pocket, but which should you choose as your daily companion?

We look at the numbers, specifications and features of both phones in a head-to-head scenario.

Visually, the iPhone SE 2020 is almost identical to the iPhone 8. It features large top and bottom bezels, the latter housing a physical fingerprint sensor while the top bezel hosts the phone’s selfie camera and speaker grille. At the rear, the iPhone SE 2020 also features a single camera with an LED flash as well as the Apple logo in the middle. It’s available in a number of colours including black, white and red.

The Huawei P40 lite is much larger in comparison, with the front of the device consisting almost entirely of the display. The selfie camera is mounted within the display in a cut-out which also minimises the top bezels. Four cameras and an LED flash can be found in the P40 lite’s rear. The P40 lite is available in a number of colours including black and light pink/blue. The P40 lite also houses a capacitive fingerprint sensor on its side and a headphone jack on the bottom.

The iPhone SE 2020 is powered by Apple’s fastest mobile chip also used in the iPhone 11 Pro, the six-core A13 Bionic. It also features a choice of 64GB, 128GB and 256GB of internal storage, but does not have an expansion slot. All three versions feature 3GB of RAM. The device features one physical SIM card slot but an eSIM option is also available.

The Huawei P40 lite features the eight-core HiSilicon Kirin 810 chipset with 6GB of RAM and 128GB of internal storage. Users can also increase that storage figure by up to 256GB through a NanoMemory card. The phone also features dual SIM functionality. 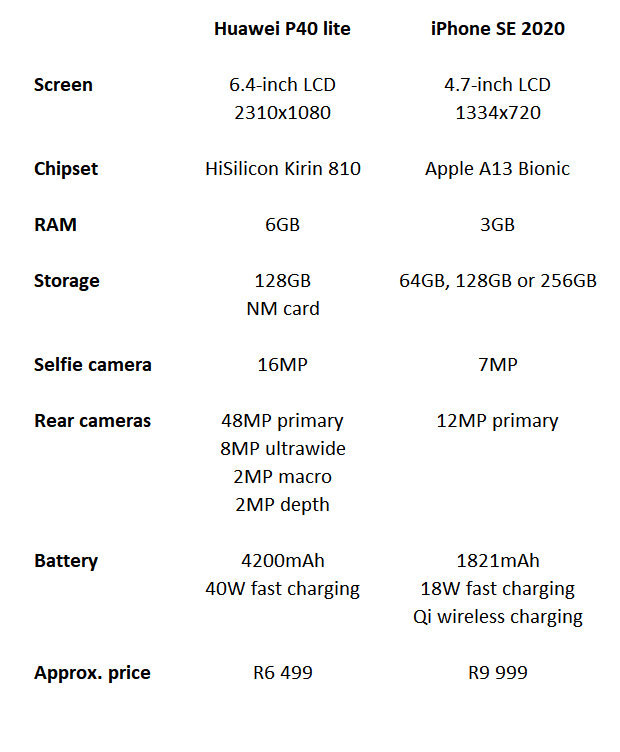 The iPhone SE 2020’s smaller footprint means a smaller battery. Its power stores tip the scales at just over 1820mAh. It can charge wirelessly or at 18W through its Lightning cable, which can top up the battery to 50% within 30 minutes.

The Huawei P40 lite features a 4200mAh battery. Fast charging is offered via a USB-C cable of up to 40W which can charge 70% of its battery in just 30 minutes.

iOS 13 is offered on the iPhone SE 2020, Apple’s mobile operating system. The App Store allows users to install apps to the device.

The Huawei P40 lite runs on EMUI 10 based on Android 10, and features Huawei Mobile Services and AppGallery for installing a host of commonly used and well-loved apps.

The iPhone SE 2020 features one camera at the rear: a 12MP snapper with phase-detection autofocus and optical image stabilisation. Up front there’s a 7MP camera for selfies.

The Huawei P40 lite features four rear cameras, with a 48MP camera with phase detection autofocus, an 8MP camera for ultrawide images, a 2MP camera for macro shots, and a 2MP sensor for depth information. Up front, Huawei employs a 16MP selfie camera.

The iPhone SE 2020 is priced at approximately R9999 for the cheapest (64GB storage) model.

The Huawei P40 lite is priced at approximately R6499. 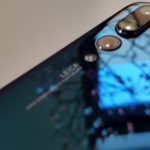