The saying “less is more” is being used in a different light in the motoring world. A few manufacturers have been messing around with three-wheeled vehicles for a few years now with varied success.

Although not a new idea, it is one that has been growing in interest. Who wouldn’t want the excitement and practicality of a motorcycle (or lack thereof) fused with the comfort of a car?

When I say that the 3-wheeler is not new, i really mean it’s not new. The first iteration that Morgan made was in 1910. That’s right, over a hundred years ago. You wouldn’t be mistaken into thinking it though, because retro doesn’t begin to describe this Morgan. Quite fantastic would be a start though. The two litre V-twin motorcycle motor (yes, that means one litre per cylinder) sits right in between the two front wheels. This is NOT a car you want to get into a head-on collision in.

Ok, VW, it’s been six freaking years. This thing is way too hot not to build. I’ll buy five, I promise. Obviously the GX-3 is not in production. And for the life of me I can’t think why. It could’ve been sold for as little as US$17 000. That may not sound cheap, but trust me, it is. That Morgan up top? Check out that price again, as well as the T-rex below. Light, fast, environmentally friendly and hot as smack, what’s not to love?

The 20Cup has the closest iteration of a car front end and a bike rear end. And magnificent for it. Though it seems like Peugeot cheated a bit here. It could have done a bespoke front end for the lil’ scamper, but it decided to showcase the, then new, 207 front end. I don’t blame them though, and it actually looks a deal better overall then the 207. No production readiness for this car though. Damnit.

Another car you can actually buy, though the term car may be pushing it. It looks like a salamander, a dune-buggy and a snowmobile had a dirty night and spewed this out. I love it. It’s powered by a Kawasaki 1400cc motor. It might not sound like much, but that engine puts out almost 200bhp. No toy, then. If you have the US$58 349 spare, why not be a kid again? Lord knows you’re going to have a lot of fun. 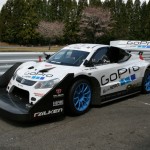